Bushmen in Tanzania – This ain’t no reality show. “Jambo!” said the young boy, as he reached out a hand still bloody from the freshly-skinned baboon he had just deposited in camp.

“Jambo”, I replied, hesitating for only a moment before stretching my hand out in return.

It was a scene right out of Lord of the Flies, except that this wasn’t a work of literary fiction. It was my introduction to the Hadza people of Lake Eyasi, Tanzania, who continue to live the way we once did, ten thousand years ago.

This was no show. The Hadzabe didn’t know we were coming. They have no village, no cell phones – most of them barely speak the local language, learning only enough to trade for arrowheads. They are nomadic, moving their camp where their hunting and gathering lifestyle leads them. And they certainly weren’t putting on a performance for tourists with the baboon. It just happened to have been a good hunt that morning. 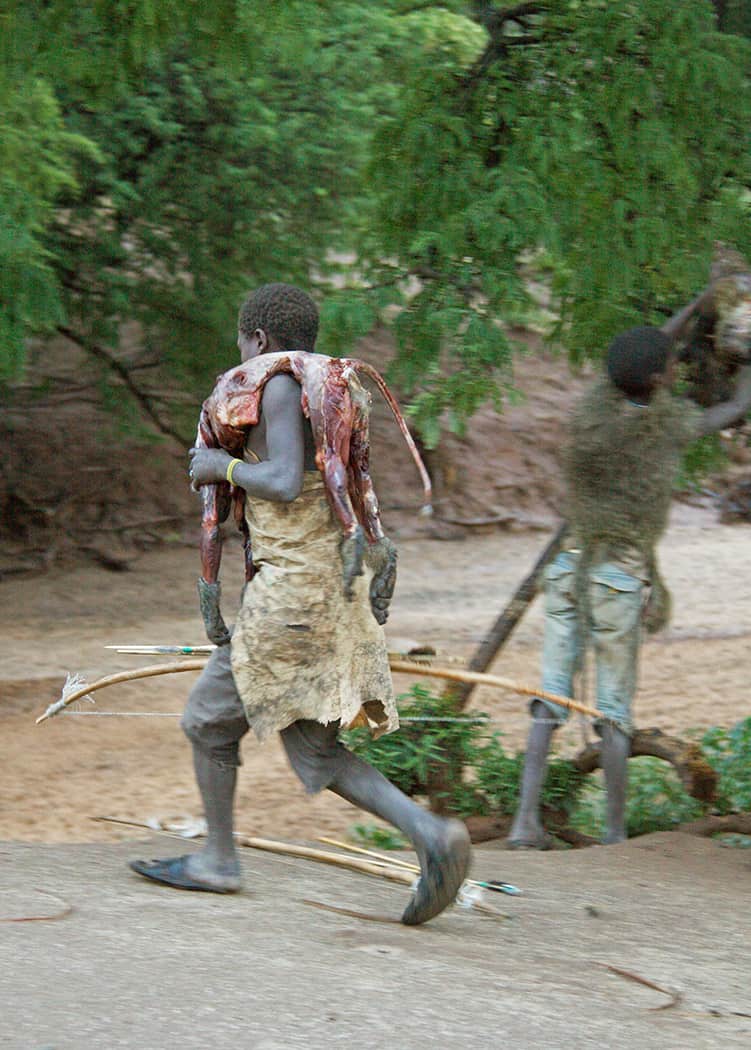 Two young boys had just returned from a hunt with a delicacy: baboon

We had arrived just after sunup, escorted by Mody, a young man of 19 from a nearby village, who had grown up next to the Hadza tribes and who spoke a little of their language. It wasn’t the first time this tribe had greeted visitors, so it turns out there was a bit of a show after all, the women inviting us to see the tiny huts they build for shelter, and the men inviting us to join them on a demonstration hunt. 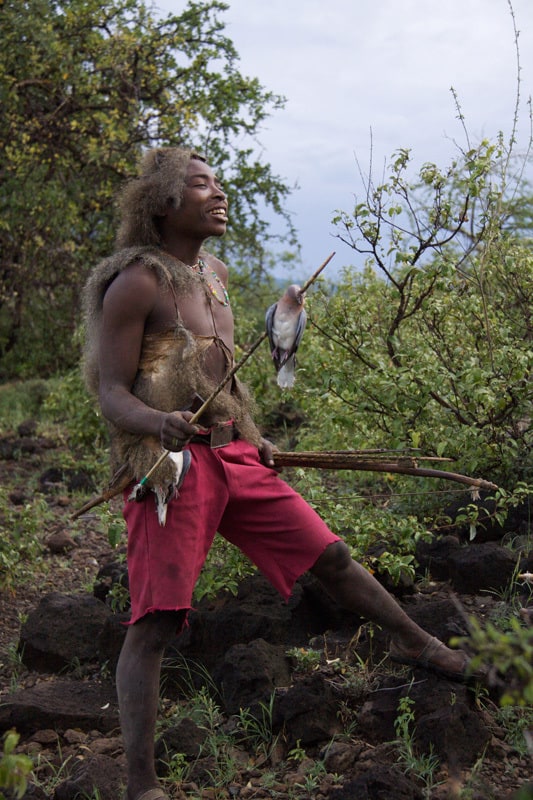 A Hadza hunter shows off his prowess with the bow

15 minutes out on our walk, several of the men, including the chief, had already brought down a few birds, so they immediately set about starting a campfire to roast them. No lighters or matches here, though. They rubbed sticks together like something out of a Survivor episode, and before long the birds were cleaned, plucked and grilled. (and you guessed it, they tasted like chicken.) “Red Shorts” helped with getting the fire going

It was on our walk back that we had a ‘moment’  of real connection: the young man with the red shorts was admiring my hat, gesturing that he’d like to try it on (which, by the way, means he’ll take it as a gift). With a little miming and some overacting, I tried to explain that without the hat, my face would turn as red as his pants, under the African sun.

The chief understood what I was trying to say, and in his own click language, explained to the others. Which started the entire group laughing.

And there it was. Genuine smiles, a good laugh, and a connection as real as it gets. Even if only for a moment, it was a moment I’ll never forget.

It doesn’t get more authentic than that.