Documenting My Love Affair with Rome They say you never forget your first love.
It certainly applies to me because it was 30 years ago that my love affair with Rome began and the city captured my heart forever.

Like its famous moniker, the Eternal City, the flame it sparked in me so long ago still burns as hot as ever. And, thanks to my old school blogging (read ‘journals’), I managed to capture the love affair from the moment it began.

Back in the day, pre-smartphones and laptops, I, like most travellers, used pen and paper to chronicle my travels. Whether I thought it was for posterity, or just to record some of the nuances that I most likely would forget over time, I usually carried a journal of some kind. And later, when I decided to move to Rome for what turned out to be 2 years, I also brought along a sketchbook. Looking back, I’m so glad I took the time to document these experiences, because each notebook, and each sketch has a story. Here are a couple of them:

1. Suntanning and Sketching in Villa Borghese

Not every minute of every day in a backpacker’s life is spent schlepping our belongings around on our backs like turtles. So when we found ourselves with a free afternoon while the Romani rested between feedings, we decided to spend a little time enjoying the sun in Villa Borghese, a beautiful park in the centre of the city. These times were also good for catching up on journal entries, and in my case, I decided to sketch what was literally right in front of me, a statue of Umberto 1. He is a big deal in Rome’s history – which if you’re interested, you can read more about here. (I just liked the play of shadow on the figures and the slightly creepy figure of Death.) What I didn’t realize is that suntanning is NOT a city sport – and in fact, is frowned upon by Italians anywhere other than the beach – a fact we learned when my friend and I were chastised for our bathing suit attire by a couple of young children! ‘Bruta Figura’ was what they called it, which I was quick to learn meant a significant social gaffe. Whoops.

Moving to Rome and looking for work meant that I had a fair bit of free time on my hands, and with a city as beautiful as Rome, it seemed a shame not to put those hands to work and do what artists had done for centuries – sketch the city. This fountain is in Piazza Navona, what many consider to be the most beautiful piazza in Italy, at the south end of the piazza close to a favourite gelato haunt of mine. So after indulging in a little coppa, I indulged in a little drawing.The central figure of the Moor (hence the fountain’s name) was only one of many sculptures by Gian Lorenzo Bernini installed in the piazzas of Rome, to the point where my friend and I suggested Rome could have been named BerniniVille. There’s no shortage of fountains in Rome. Whether it’s the world-renowned piazzas in the centre of the city, or the expansive parks on the periphery, you can always find a beautiful piece of marble worth sketching. The story behind this little one in Villa Pamphili, is this: I had decided to rent a room in an apartment to stretch my dollars while looking for work, and lucked out when I found an American med student who had a room to rent at the south end of the city. The funny part was that with my fledgling Italian, I probably couldn’t have chosen a more difficult address to pronounce: “Circonvallazione Gianicolense Cento”. Every time I was asked for my address, I felt like I was trying to master a tongue-twister with a mouthful of marbles. But pronunciation aside, the apartment was a great find, and only steps away from one of the entrances to Villa Doria Pamphili, a large park where I found this little fountain. Not something likely to make it into art history books like its more famous cousins, but a pretty little thing nonetheless. 4. Christmas Cards from the Colosseo

By the time Christmas came around, I had found a job teaching English, the apartment was working out well, and my Italian was improving. But there was no way my finances were going to allow for a trip home for Christmas. Instead I decided to give the only thing I could afford: so I set out to sketch one of the most iconic landmarks in the city, found the perfect vantage point, and produced a pen and ink image of the Colosseum. 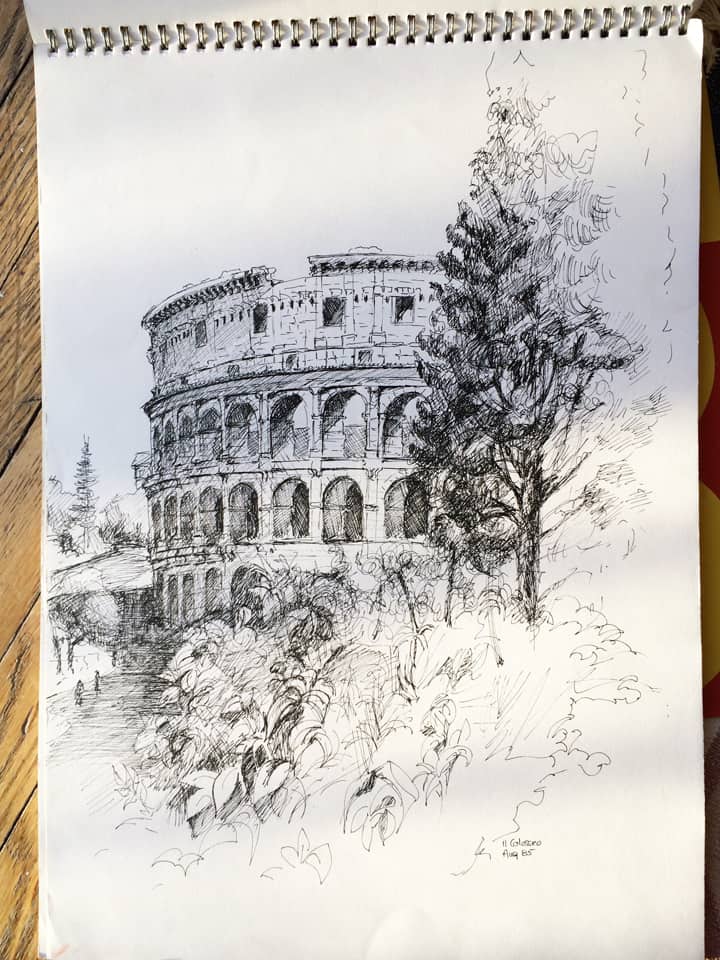 It seemed only fitting as a gift from my adopted home-away-from-home for the holidays. A little craft paper and some photocopies later, and everyone in my family received a giant ‘Colosseum Christmas Card’ with a personal letter inside. It meant a lot to me to reach out to my nearest and dearest, especially my grandfather, since I had not been able to make it back (for financial reasons again) when my grandmother had died earlier in the fall. Years later, after my grandfather passed away, I found the card I had sent to him, and brought it home with me, where I still treasure it. 5. Half a Gaffe in Piazza di Spagna

Apparently I hadn’t learned much from my first days travelling, because I managed another social misstep – this time at the foot of the Spanish Steps. Piazza di Spagna was a favourite place of mine in Rome from the first time I saw it all decked out in May Day glory with flowers adorning every level from the bottom to the top. Then there was the moment during that first visit, while sitting on the steps listening to a classical harpist on a sunny afternoon, that I realized that I could actually live here! ? and ended up moving to Rome a year later. And following that move, there was my regular ritual of plunking myself on the steps to read mail from home that I would pick up at the nearby American Express office. 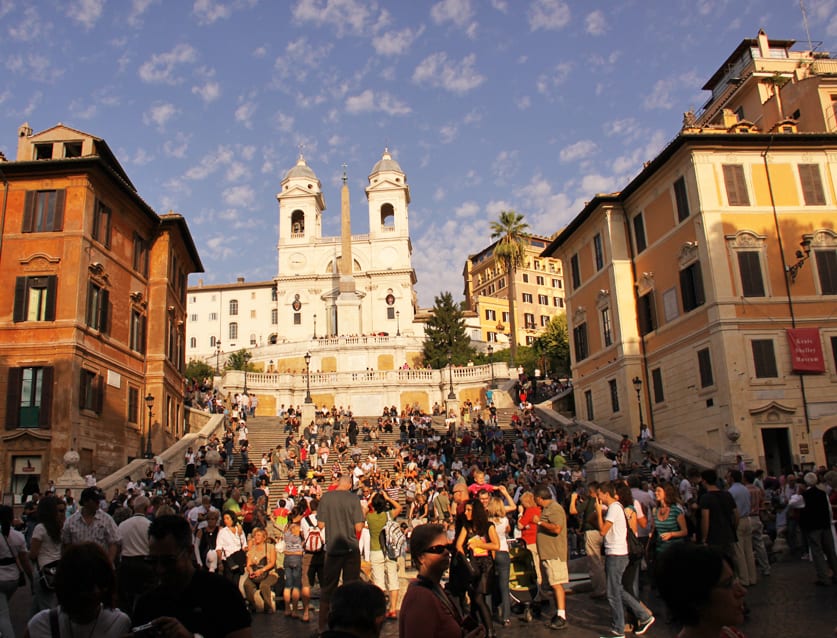 These steps held a special place for me, so it seemed like the perfect subject to sketch. Finding a building to lean against at the corner of Via Condotti, I began drawing and had gotten to the point you see here, when a young man approached me. Thinking he had come to admire my work, I was surprised when instead, he politely told me I should leave. Having a better handle on my Italian by this point, I asked him why, and was told that my presence here was a ‘bruta figura’ and that I was taking away from the elegance of the piazza! I guess starving artists don’t go well with high-priced retail! Indignant, I was fully prepared to ignore him and continue when my pen ran out of ink – so I had no choice but to leave (but I made it look like it was my idea).

TIP: If you’d like to keep a record of your own trips, but don’t consider yourself a writer or a photographer, why not pick up a few postcards from each destination or museum that you visit and just jot down a few things that impressed you. It’s much less of a commitment, but you still end up with a beautiful record that you will always treasure.