No Ordinary Ordinations in Myanmar Monastery near Inle Lake known for its oval windows

Buddhism is a huge part of the culture in many Southeast Asian countries, and in particular Myanmar, with over 90% of the population counting themselves as followers of the Buddha and his teachings. Luckily for Henk and I, the timing for our March visit meant we got to observe one of the most important ceremonies a young Myanmar boy can mark as he becomes a young man: the Buddhist ordination ceremony known as ‘Shin Pyu’. Even luckier for us, we got to do it more than once.

Shin Pyu is described as an ordination ceremony because a young boy transitions to manhood by spending time as a novice monk, living at a monastery and observing the rules and discipline of the monk’s spartan, disciplined lifestyle. The day that he becomes this young novitiate is a significant event that is steeped in traditional rituals and symbols, and is accompanied by a justifiable amount of pomp and circumstance.

It’s also an extremely important and proud day for every Myanmar family.

Ordinations are a BIG deal for the whole family

So never in a million years would I have imagined Henk and I being a part of something this personal – until we found ourselves invited by Zaw Zaw, our guide in Bagan, to attend his son’s ordination ceremony which happened to be during the same week we were visiting. Needless to say, we were thrilled to accept.

Pomp and circumstance may characterize the actual ordination ceremony, but life as a novice monk is not exactly summer camp. The boys sleep in dormitories, wake up at the crack of dawn, follow strict rules that encourage discipline and obedience, and study – a lot. They are allowed only 2 meals, breakfast and lunch, and the only food they eat is what is donated to them by the community. Which is why every monk, novice or otherwise, has an alms bowl which he uses to go out and collect food every morning, every day – and why a ceremonial alms bowl is a part of the ordination rituals. Monks must collect food offerings from the community every day.

The community is generous, of course, as this is part of Buddhist culture, and in some large monastic centres, it is quite an honour for families to provide these donations, and the mealtime occasion when they offer this food becomes a huge deal.

It’s not all sacrifice, though, and the young novices aren’t required to give up all the fun of being a kid. Which is why you’ll still see novice monks playing football, or joking around with each other, waving and smiling to visitors, even learning to ride a bike (that is waaay to big for him!) 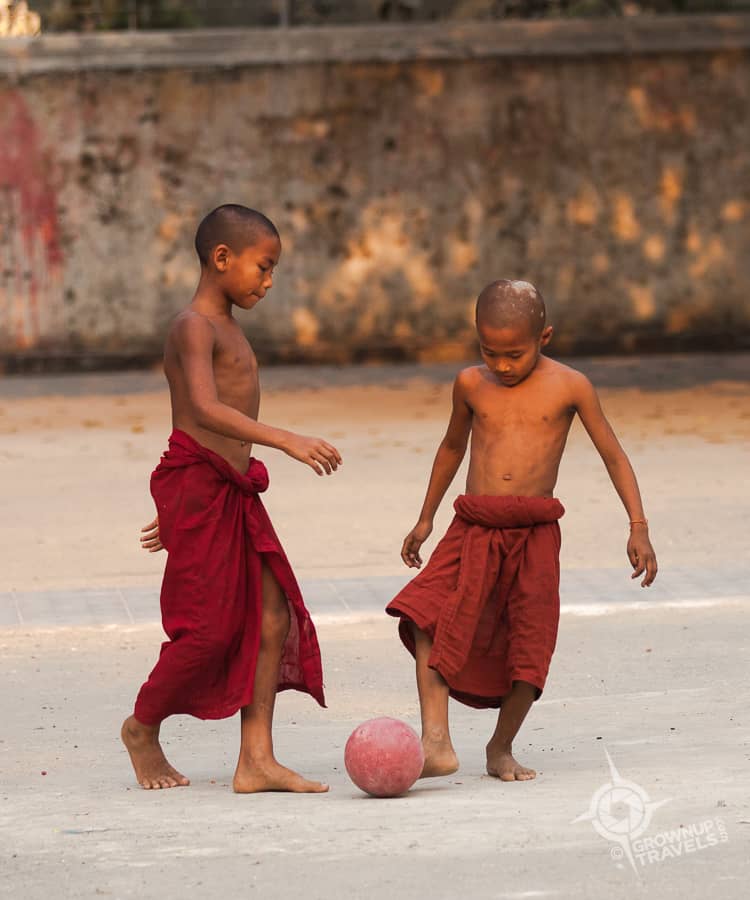 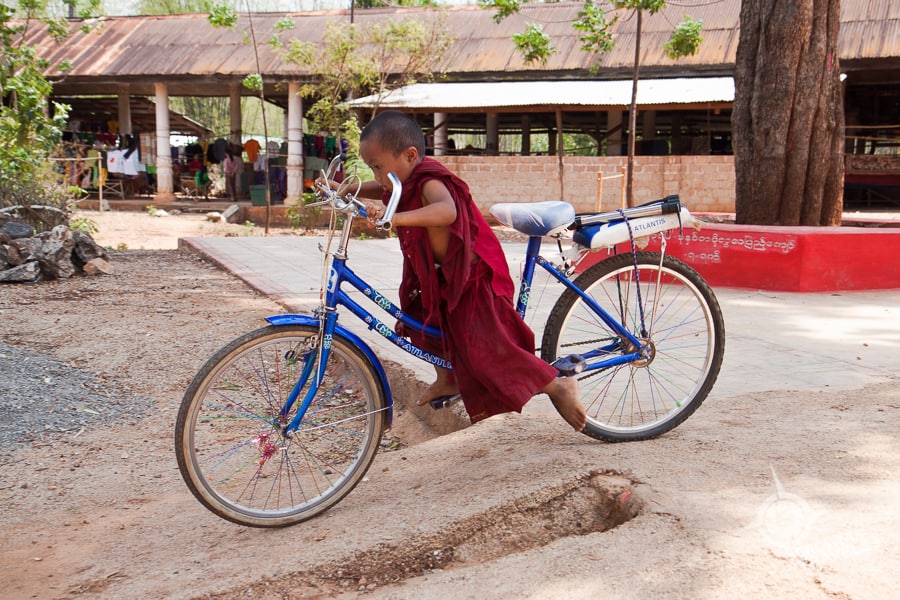 Despite being too big for him, this little novice was determined to ride that bike… But this transition to maturity can be exciting for some boys and intimidating for others, especially the younger ones who may not relish the idea of spending even the minimum week-long stay that is required at ‘monastery camp’.

Zaw Zaw’s son, for example, was one of those boys who weren’t so thrilled with the concept. Whether it was apprehension about having his head shaved, or the idea of being away from home for the first time, no amount of royal regalia could put a smile on his face! He had been lobbying his parents for weeks that his stay at the monastery would be ‘just for one week, right?’ and even the pageantry of the big day didn’t seem to cheer him up. Zaw Zaw and his wife, on the other hand, couldn’t have been happier or prouder to celebrate this milestone, and on the day of the ordination ceremony, these parents were all smiles.

Even to outsiders like ourselves who didn’t understand the significance of the event to the same degree, the pageantry that came with the ceremony was a feast for the eyes (and later a feast for our stomachs!).

First a little historical background: the ordination of a Myanmar boy is meant to be a re-enactment of the initiation of Prince Rahula (Buddha’s son), which is why the modern-day novices are dressed in princely regalia. Depending on the wealth of the family, each boy rides on an elaborately decorated oxcart, horse, or even an elephant (which even for the wealthiest in Myanmar would cost a king’s ransom of about $10,000!) Ox carts decorated for an ordination ceremony parade in Bagan

Parents and close relatives lead the procession, dressed in their finest and carrying 8 items every novice monk will require, including the alms bowl, robe, sash, and a few toiletry items. Other family and friends carry golden umbrellas, goblets, flowers and food trays, meant to emulate the royal trappings of the prince’s household. The entire group proceeds either to the monastery or another venue where there will be music, food for all the guests, and where the boys will have their heads shaved by a senior monk, exchange their ceremony finery for simple maroon robes and officially become novice monks. Relatives of the novices carry flowers, vases, and other ceremonial items

As first-time visitors to the country, Henk and I were happy to be invited to witness this important event from the sidelines, but no sooner had we come within 50 feet of the ceremony tent, than we were invited by several of the hosts to sit down and ‘eat, eat, eat!’ with the rest of the guests. Of course we were honoured to be included, and couldn’t thank our hosts enough for their generosity and hospitality as we were brought dish after dish of food.

Leaving Bagan later that day full of food and the warmth of the welcome we had received, Henk and I couldn’t stop talking about how lucky we had been for having met Zaw Zaw at the specific time when his family was celebrating such an important occasion. We kept asking ourselves “What were the chances of that happening?! After all, how much more authentic an experience could a traveller hope to have! It seems luck was really on our side on this trip, though, because lightning struck twice when it came to these ordination invitations! After spending a week touring with Toe Toe, our young guide based in Mandalay, and Po Po, our driver, we found ourselves in Shan State, near the village where Po Po’s wife grew up. Her family was participating in a village-wide ordination ceremony, where one of Po Po’s nephews was a young novitiate. We were invited once again to be guests of his wife’s family and enjoyed another delicious meal with them and the entire village.

Coming back to Canada after 3 weeks Henk and I couldn’t help but feel that our trip had exceeded our expectations in many ways, but especially because of the generosity and warmth of its people. But finding ourselves guests at two ordination ceremonies –  that was truly extraordinary. We could only chalk it up to good kharma. Golden umbrellas decorated for the ordination procession in Shan state

TIP: Although it is a very hot time of year in most regions of Myanmar, March is the perfect time to see many of these ordination ceremonies since the kids are out of school, and families celebrate this milestone in the weeks leading up to the annual New Year’s ‘Thingyan‘ (Water Festival) holiday.