The Pink Beach, the Princess, and the Creeps Anything underwater just freaks me out. It’s one of my biggest fears.

Don’t get me wrong, I love swimming in turquoise waters, majestic ocean views, and northern Ontario lakeside living, but honestly, stuff under the surface scares the bejeezus out of me. Animate or inanimate.

Which is why I have very mixed feelings about our visit to one of the most unique and rare beaches in the Caribbean: Barbuda’s Pink Beach. Princess Diana at the KClub, Barbuda

I heard about this beach when I was researching our trip to Antigua last February, and I discovered that Barbuda (one of Antigua’s 2 sister islands) had one of the few pink beaches in the world. When I learned that Princess Di used to vacation on Barbuda because of its privacy and remote location far from the paparazzi, I was hooked.

With visions of candy-coloured shores being lapped by crystal-clear waters, we booked a short flight on an island-hopper out of Antigua, and landed at Barbuda’s airport (read ‘150 sq. foot bungalow’) prepared for a day of exploring. Fortunately, just outside the airport we met George, a local resident (and retired politician) who offered to serve as our taxi for the day and show us the sights. As one of only 1500 inhabitants of Barbuda, George was a well-known character, whose customary greeting to other locals was “Everything the same?” which should give you some idea of the pace of the island.

First on the tour was a scenic overlook on the northern tip of the island, where we hiked up through a cave to get an impressive view of the crashing waters of the Atlantic smashing into a rocky shoreline. Surrounded by treacherous reefs, Barbuda’s coast is littered with hundreds of wrecks, both ancient and modern, which, if you’re a scuba diver, is excellent news. For me, not so much. In hindsight, it foreshadowed what was to come on our next stop: Pink Beach. The north Coast of Barbuda, seen after hiking up through the cave

Completely undeveloped, with the exception of one tiny beach bar whose only occupants that day were its owners, Pink Beach stretched for miles on either side of us – and actually lived up to its name – it was pink! Made up of millions of tiny pink shells, the ‘sand’ filled our footprints as we walked along the shoreline with the wind blowing these coral-coloured shells into our tracks. With no one else on the beach, it was as if even our own presence was being erased after every step we took. Pink shells give the beach its beautiful colour

And that’s when I saw the wreck. The wreck on Pink Beach

A modern barge that had broken loose in a storm and washed up on the beach years before, it was almost completely buried in the sand, except for its metal skeleton that protruded above the decks. I can’t explain exactly why, but even at a distance, it creeped me out.

Maybe it was the storm clouds on the horizon providing an ominous backdrop. Maybe being complete alone on the deserted beach emphasized the fact that we really were standing on a miniscule spit of land in the middle of an ocean. Or maybe it brought back memories of Tom Hanks in Cast Away. (okay, maybe not exactly the same!) But whatever it was, I wasn’t loving Pink Beach the way I thought I would.

Most people dream of being on the proverbial deserted island, but I guess I didn’t expect it to feel so… deserted.

So it was with some relief on my part that we packed up after an hour or two, and set off to discover George’s favourite beach on the southern end of the island – and where it turns out Princess Diana visited often when it boasted the swishy K-Club. In fact, the beach was named after her on July 1, 2011, to coincide with what would have been her 50th birthday. The beach is definitely royal-worthy, a long stretch of wide white/gold sand with gentle surf and calm waters dotted with the odd yacht at anchor. But even this gorgeous beach had one unsettling aspect: the former hotel where Diana once played is now abandoned with little more than a string of derelict beach bungalows which are slowly decaying as the sand and the beach vegetation gradually take them over. Given the association with Diana, it seemed even more sad and poignant, and I couldn’t help but feel a sense of loss and isolation. 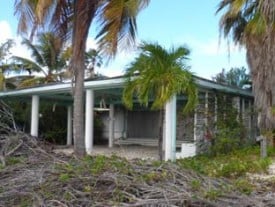 The beach reclaming the former KClub on Princess Diana beach

This certainly wasn’t what I had expected from my ‘pink island paradise’, or at least, from my initial imaginings. So I had to ask myself, after all these emotional reactions to this tiny Caribbean island, would I recommend a visit to Barbuda?

The answer is: absolutely.

I’ll never be a scuba diver, that’s for sure, and I have a soft spot for Diana like most of my generation, but Barbuda is one place that truly is a world apart, even today. So far apart, that I wasn’t prepared for it, to be honest. Unspoiled by mega-tourism or mega-cynicism, Barbuda remains almost as remote and beautiful as it must have appeared when Columbus navigated past its dangerous shoals and first set foot on it over 500 years ago.

And there’s nothing creepy about that. Barbuda, seen from the air

TIP: Getting to Barbuda is a bit of an effort in itself given that you don’t have a lot of options: either you take the daily ferry (provided it is running) or an all-day catamaran excursion across what can be sometimes rough waters, or you can opt for a short flight. We recommend the flight, because it’s shorter and offers great views over the islands both coming and going.