No matter where I’ve travelled, there always seems to be that certain special landmark that visitors go out of their way to touch for good luck. I’m not particularly superstitious myself, but as the old saying goes, ‘When in Rome…” so I’ve done my tourist bit to polish up a few bronzes. Here are a few good luck statues from around that world that visitors seem particularly fond of fondling in the hope that they will bestow some good fortune in return.

This little piggy went to market.. And that market is the Mercato Nuovo in Florence, to be precise – where this little piggy got his nose rubbed! That’s where you’ll find this bronze of ‘Il Porcellino’, a popular tourist attraction and good luck statue. It’s within easy reach if you want to follow the ritual that ensures you will return to Florence in the future: place a coin in the boar’s mouth, watch it drop into the grate below, and then polish up that little piggy’s bronze nose with a rub just to seal the deal. If the whole thing reminds you of the superstition of throwing a coin into the Trevi in Rome, that might be because the original marble pig after which the bronze was modelled was actually found in Rome. I guess Rome had the Trevi, so Florence took the pig.

This little piggy had… Vegemite? This little piggy went even further than the market in Florence, and ended up in the land down under, where he took up residency outside the Sydney Hospital. It’s easy to see why people going to visit the hospital might want to rub this little porker for luck, (certainly not because they want to return again soon!), but couldn’t they have used a cuddly koala bear instead as their good luck statue?

…all the way home to Aix en Provence, France. I know they say imitation is the sincerest form of flattery, but I find it odd that France couldn’t come up with something more original than yet another Porcellino copy. I mean, it’s not like they don’t have artists of their own. If I were Florence’s Porcellino, my little piggy nose would be seriously out of joint. Another kind of snout

Apparently it’s not just porcine noses that are lucky. This giant bronze head, a copy of the original one sculpted by Gutzon Borglum, sits at the entranceway to Lincoln’s tomb in Springfield, Illinois. It’s seen a fair bit of wear and tear over the years, with thousands of superstitious visitors rubbing it every year, to the point where the nose is actually getting damaged. It’s likely future visitors will see Lincoln with a ‘nose job’ and be touching a replacement proboscis versus the original. Still, even rubbing a reproduction sure beats scaling Mount Rushmore just to wipe Lincoln’s nose. And now to the extreme other end:

Pilgrims would probably prefer to rub St. Peter’s nose if they could, but the position of this statue in the Vatican means the closest they will get is his big toe. Hence the reason Christ’s ‘Rock’ has a rather shiny foot. Who knows? Maybe a little foot rub could go a long way when it comes to deciding who gets past those Pearly Gates…making St. Peter the ultimate good luck statue to rub! 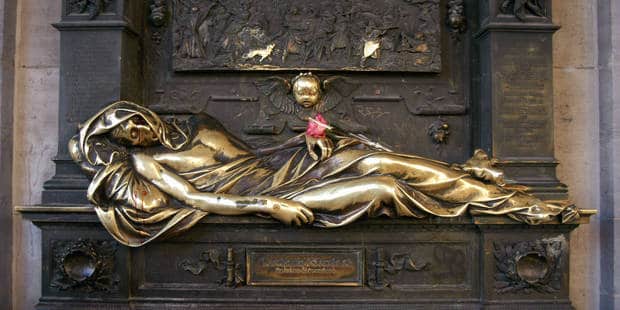 When it comes to earthly love, Belgium’s bronze of Everard ‘t Serclaes seems to have a huge following, with visitors who rub the statue believing it will bring them a year of happiness in love. And by the all-over shine on this good luck statue, it looks like Everard has been enjoying a full-on massage for centuries. Whatever happened to “Rest in Peace”?

And speaking of love… Ah, Verona, and the hopeless romantics who come to see Juliet’s fabled house and balcony to leave love letters and….cop a feel? I’m guessing it’s the wannabe Romeos who have been rubbing her boob as the ‘next best thing’. Good luck with using that move to meet girls in the real world.

What happens in Vegas… If there’s ever a place you need ‘Lady Luck’, it’s Vegas. And it looks like more than a few visitors took a shine to these ladies, but not in a good way. Then again, as Vegas goes, these good luck statues may be one of the more tasteful pieces of art.

Taking good luck by the horns

Anyone who’s ever done well in the stock market (anyone…?) knows that it’s as much about luck as it is knowledge and research. Which may be why Arturo Di Modica’s ‘Charging Bull’ bronze in New York’s Financial District sees a lot of love. People say that if you rub the bull’s horns or nose, it will bring good luck. Of course, there’s also a tradition of rubbing something else even more ‘potent’ if you really want to become a ‘Master of the Universe’. Which certainly feels like it’s lucky for the bull, anyways! Whatever makes travellers seek out good luck statues like these, I say go for it. Even though I say I’m not superstitious, every time I visit Rome the last thing I do before leaving is throw a coin in the Trevi. Because for me, the best luck I could ever wish for is the opportunity to see Rome – or any other part of the world – on future travels.

TIP: If you are ever in Brussels, don’t miss the semi-mandatory pilgrimage to see Manneken Pis, a little bronze statue of a young boy peeing. And don’t worry, although it is a good luck statue revered by the city, there’s no need (or access) for visitors to rub any ‘functioning parts’ of the statue.