Spooky Sinners in the Streets of Spain 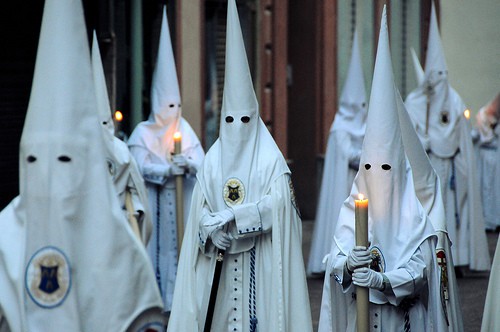 Someone warned me about the strange garb that I would see on the streets of Spain during Easter Week, so I was somewhat prepared for the spectacle that takes place during Semana Santa (Holy Week). What I didn’t realize was that for locals and tourist alike who flock to Spain at this time of year, this festival is like a cross between a Santa Claus Parade and a Holy Pilgrimage.

The Parades of Semana Santa

The parades and processions that wind through city streets are of course, the highlight of Semana Santa, with a very structured but simple premise: each hermandad (local church group) prepares their paso (float) for a tour around town, attracting a huge audience along the parade route. The floats typically feature life-size figures of Christ or the Virgin Mary depicted in various moments of the Passion, and are clothed in elaborate garments with beautifully crafted and embellished cloaks. Each float’s beauty and size is a point of pride for the hermandad, with some of these centuries-old floats reaching hefty weights, which is significant given that no trucks are used to move these around. Hoisting a Heavy Burden Are the Costaleros

Instead of using mechanical devices or towing them behind trucks, all of the Semana Santa floats are carried on the shoulders of as many as 40 costaleros. These men are dressed identically in espadrilles and sashed waists, and they are hidden beneath the wooden structures which seem to float, swaying slowly to the rhythmic beat of an accompanying band that leads the way.

I saw the first of these Semana Santa parades while in Granada, where the streets and charming plazas soon filled with thousands of people. Families came out to view the parade with their children in strollers or on shoulders, street vendors were selling everything from stuffed animals to tasty snacks, and everyone waiting in excited anticipation for the beautifully decorated float to arrive. It felt a lot like a Santa Claus parade with all eyes watching for the man (Jesus) – or woman (Mar) – of the hour. Sometimes just the feet are visible as the paso lives up to its name and ‘floats’ through the streets.

The party mood changed later in Holy Week, however, when I found myself in Cordoba on the eve of Good Friday. Silence and solemnity replaced celebration, and the massive crowds who had assembled now watched in absolute silence as a dusk-to-dawn procession moved through the streets. No one spoke, and only the haunting music of the band warned you that the paso was arriving.

Penitants Who Resemble Another Sect of Sinners…

Perhaps the strangest part of the procession were the penitents known as Nazarenes who form part of the entourage as well, some carrying crosses or long candles, some barefoot, and all wearing distinctive hoods and cloaks that looked disturbingly like Ku Klux Klan outfits. Marching for hours as Holy Thursday evening turned into Good Friday morning, these anonymous cloaked figures walked to acknowledge their sins and perform this penance, and their solemn purpose was reflected in the mood of the crowds watching. Originally much more pilgrimage than performance, Semana Santa is definitely changing with time, and perhaps becoming more Santa Claus than ‘Santa’. But regardless of whether you come for the spiritual significance of the season or the colourful celebration, it is a very busy, and much anticipated time on the Spanish calendar, and as festivals go, one of the best.

TIP: If you are thinking of visiting Spain for Easter Week, book your rooms well in advance. I was able to visit Granada and Cordoba, (where I fell in love with a cute courtyard in a tiny hotel), but I couldn’t find a room of any kind, from hostel to hotel, in Sevilla. It’s that popular a season.