Visit Niagara-on-the-Lake on a sunny summer day and you’ll be treated to a picturesque little town that smells like fudge and looks like a Victorian Botanical Garden. And because there are so many indulgent, grownup things to do in Niagara-on-the-Lake you’ll want to bring your appetite and your camera when you spend the day here. But fair warning: if you suffer from garden envy (which I do) it might be best to stay home. Because this town is absolutely picture-perfect.

A year doesn’t go by that I don’t pay at least one visit to Niagara-on-the-Lake, Ontario’s version of Celebration, Florida (a Disney-manufactured town where everything has been engineered to look like an American ideal of perfection). Thankfully, Niagara-on-the-Lake is the real deal with genuine history and charm. The historic homes are as authentic as the 19th century Court House and Apothecary downtown (now a museum). In fact,  the town itself was designated a National Historic Site in 2003 because it boasts the best collection of Loyalist colonial buildings built just after the War of 1812. Not to be Confused with Niagara Falls

First of all, let’s be clear: Niagara-on-the-Lake is nothing at all like its neighbour Niagara Falls, Ontario. The natural wonder that is Niagara Falls is definitely spectacular, but nobody would use that adjective to describe the town with the same name: Niagara Falls has a lot of the kitsch you’d expect in an internationally famous tourist town, including wax museums and hokey photo booths where you can take a photo of yourself in a barrel ‘going over the Falls’ as a souvenir. There are also a couple of casinos, if you really want to leave some money there. Niagara-on-the-Lake, on the other hand, offers charms that are both refined and plentiful.

Take in a Performance at the Shaw Theatre

One of the most popular things to do in Niagara-on-the-Lake is attend a theatre performance during the Shaw Theatre Festival which happens at several venues from April to December, including The Royal George Theatre located at one end of Queen Street and the flagship Festival Theatre at the other. Of course, tickets to the Festival are in high demand, so if you are planning a visit to Niagara-on-the-Lake, you’ll definitely want to book these in advance.

FUN FACT: Festival Theatre was actually opened by Her Majesty Queen Elizabeth 11 herself in 1973  – how’s that for the definition of refined taste! Get a Taste of Ontario’s Wine Country

Speaking of refined taste, Niagara-on-the-Lake is the perfect destination for wine aficionados, too. Because of its position between the Niagara river and the Niagara Escarpment, the area surrounding Niagara-on-the-Lake has a unique micro-climate that is perfect for growing grapes. Which means the town is smack-dab in the centre of Ontario’s Wine Country, which is reason enough to visit. Visit one of the region’s boutique wineries, enjoy a music and wine celebration at one of the largest, or just shop for the finest vintages at the retail stores on Queen Street. (You really can’t visit Niagara-on-the-Lake without having at least one glass of wine.)

And speaking of vintages, Niagara-on-the-Lake is known for its elegantly appointed Vintage Hotels, a collection of historic inns (four of which are located in Niagara-on-the-Lake) that offer everything from spa services and fine dining to romance packages for grownups who want an indulgent weekend escape.

Teatotallers Will Love Niagara-on-the-Lake, Too

On this particular Sunday Henk and I opted instead for an indulgent Afternoon Tea at the Prince of Wales Hotel, which is my favourite place for afternoon tea in Southern Ontario and, in my opinion, one of the best things to do in Niagara-on-the-Lake. 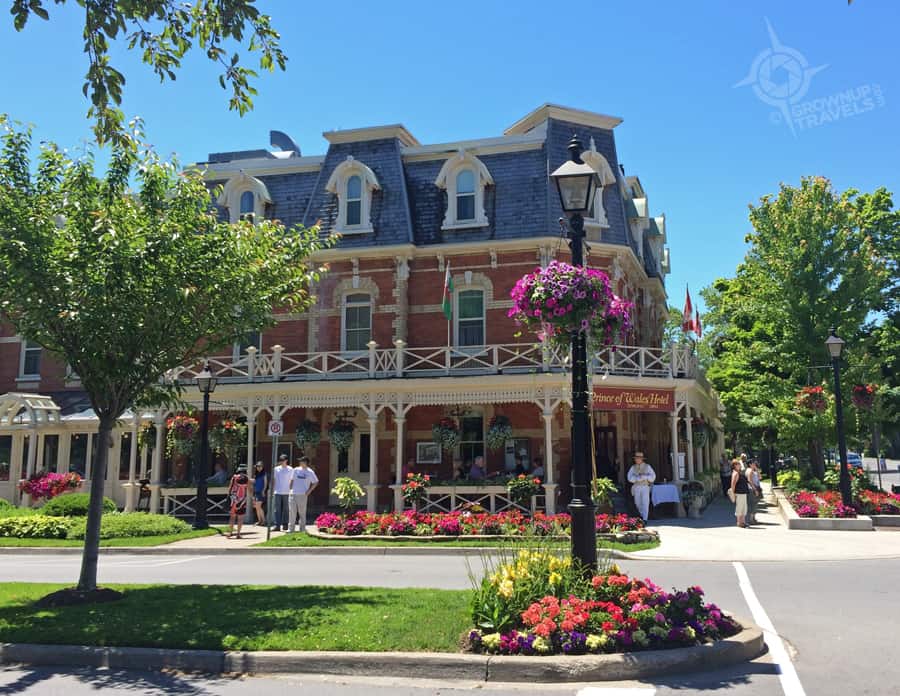 The Drawing Room where tea is served has all the trappings you would expect when you think of an English Tea Room, including fine bone china, silver servery, antique furnishings and decor and even a pretty sunroom that overlooks the street. The beautifully appointed Drawing Room at the Prince of Wales Hotel

Of course the tea itself and the English delicacies that go with it never disappoint. Sandwiches are as fresh and light as the pastries, the Devonshire clotted cream for the scones is as thick as the homemade jam that accompanies them and no matter how hard we try, we can never finish all the tiers of goodies, and end up taking some home. Worth the drive from Toronto

Niagara-on-the-Lake: Not Just a One-Street Town

Perhaps the best part about Niagara-on-the-Lake is that it’s more than just a one-street town. Yes, the specialty boutiques and art galleries that cater to the visitors are all found on Queen Street, with fudge shoppes and ice cream parlours almost as numerous as the pedestrians. But if you walk a few blocks off the main drag, you can stroll lush streets lined with 19th century clapboard-sided homes, many of which are now B&Bs, or just sit and enjoy a summer concert in the town’s beautiful Simcoe park, whose bordered gardens explode with colourful blooms.

Have a Drink Overlooking the Niagara River

Keep walking towards Front Street and you’ll arrive on the shore of the Niagara river at Queen’s Royal Park with its gazebo looking out across the water to the site of old Fort Niagara on the American side of Lake Ontario.

Or follow the river a little further west to the Niagara-on-the-Lake Golf Club, which boasts gorgeous views of its own and where you can end your day with a drink while watching sailboats float past. The best part: no membership required.

It all sounds too good to be true, yet no matter how many times I visit, I always find wonderful things to do in Niagara-on-the-Lake. Which is why this pretty little town always satisfies my craving for a perfect day trip from Toronto (and the perfect Afternoon Tea!).

TIP: Niagara-on-the-Lake is busiest in spring and summer (and prettiest with everything in bloom) but it also means rooms and restaurants can book up quickly. So if you are planning on making any kind of reservation during the peak season of May through September, plan ahead to secure your room – or your spot for tea!