As cozy as a snug in a pub: 3 authentic places to drink in Ireland The Irish can drink, there’s no doubt about that. In fact, after spending a little over a week there sampling the pub life, we had to go to Italy to sober up!

The Irish Pub is as iconic as the cloverleaf when it comes to symbolizing Ireland, but even if you’re a tea-totaller, there’s much more than just Guinness to drink in at one of these legendary establishments, whether it’s the history, the architecture or just the craic (conversation). Here are 3 authentic places to drink in Ireland that we would recommend for all those reasons and more. I’ll start with the Palace Bar, in Dublin’s Temple Bar neighbourhood. Heading into the city after spending time in the upscale fishing village of Howth just outside Dublin, Henk and I wrestled our hangovers to the ground enough to explore this area, famous for its bars on every corner. My criteria for choosing a bar was simple: nothing younger than 1850, and as luck would have it, Palace Bar not only drew me in with its exterior charm, but it nicely fit the historical bill as well, dating back to 1823.

Visually the bar is almost frozen in time since its Victorian origin, with rich woods and a stained glass ceiling skylight in the backroom where turn-of-the-century literati and later journalists from the nearby Irish Times would gather from the 1940s to the 1960s. It’s easy to see that conversation is the tradition here, because the bartender was more than happy to comply as I sipped a non-alcoholic iced tea. (the hangover won the day, I’m afraid.) It was the bartender who pointed out the history of the ‘snug’, small private rooms at the front of bars hidden from other patrons, and with frosted glass windows street-side, to prevent prying eyes of passersby. At a time when it was frowned upon for women to enter pubs, this provided both a discreet entrance and exit for them, as well as any other privacy-seeking patron who was best not seen quaffing a few (like the local priest, or police officer, perhaps.) 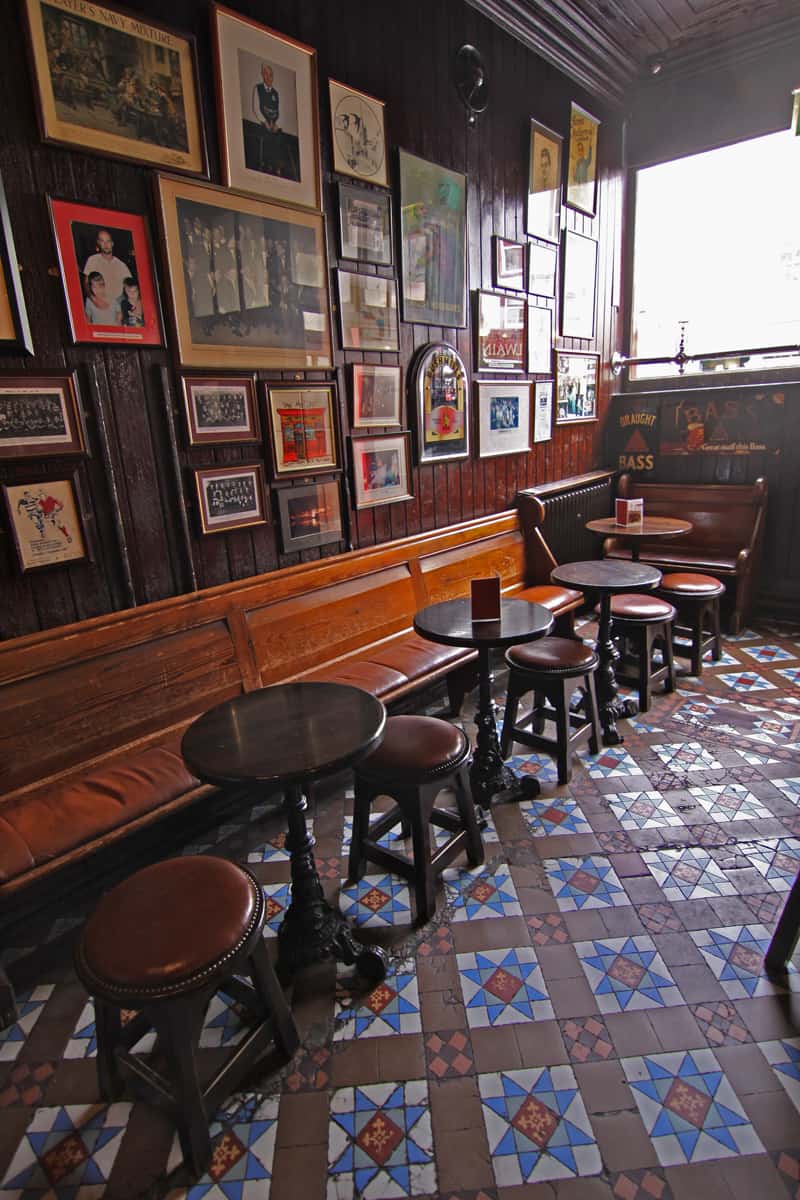 Interior of Blakes of the Hollow pub, Enniskillen, Northern Ireland

Blakes of the Hollow, Enniskillen

Northern Ireland offered us a different kind of discovery, in the William Blake pub, also known as Blakes of the Hollow in Enniskillen. Hearing that this was one of the oldest pubs in the area, we decided to make a stop in here on our way back from the Giant’s Causeway at the northern tip of the country. Sitting at the wood-panelled Victorian bar, we couldn’t help but notice a tiny sign that advertised Inniskillin wines. Coming from Toronto near Niagara-on-the-Lake, where there is a well-known Inniskillin winery, we had to ask the barkeep what the sign was all about. Not knowing we were from Toronto, he explained that his cousin runs a pub in Toronto (P.J. O’Brien’s), and had sent the wine over as a bit of a lark, given the similarity to their hometown’s name, Enniskillen. We told him that we knew both the winery AND the Toronto pub well, so we naturally raised another glass to celebrate the small world that it truly is. Getting behind the bar at William Blake’s pub From small world to small town, the town of Doolin was a must-do stopover on our way to the Cliffs of Moher in County Clare, but not just for its proximity to the spectacular cliffs. Speaking of which, are you heading to Dublin any time soon? If so, and you intend on seeing the iconic Cliffs of Moher, you might want to consider doing some research into scheduling a Cliffs of Moher tour from Dublin. No trip to Ireland would be complete without seeing this natural wonder after all. Known for its traditional Irish music and legendary craic, the tiny town of Doolin provided a great selection of music pubs, so we chose to spend the evening at O’Connor’s Pub. Dating back to 1832 (hitting my pre-1850 criteria nicely!), the pub may have lacked some of the grandeur of the Victorian ladies we had seen elsewhere, but the excellent music (and beer) made us forget the rainy night outside. When a local grey-bearded fisherman stepped up to join the band for an impromptu story and song, we couldn’t help but feel like we had found our neighbourhood ‘local’ even though we had come from over 3000 miles away. 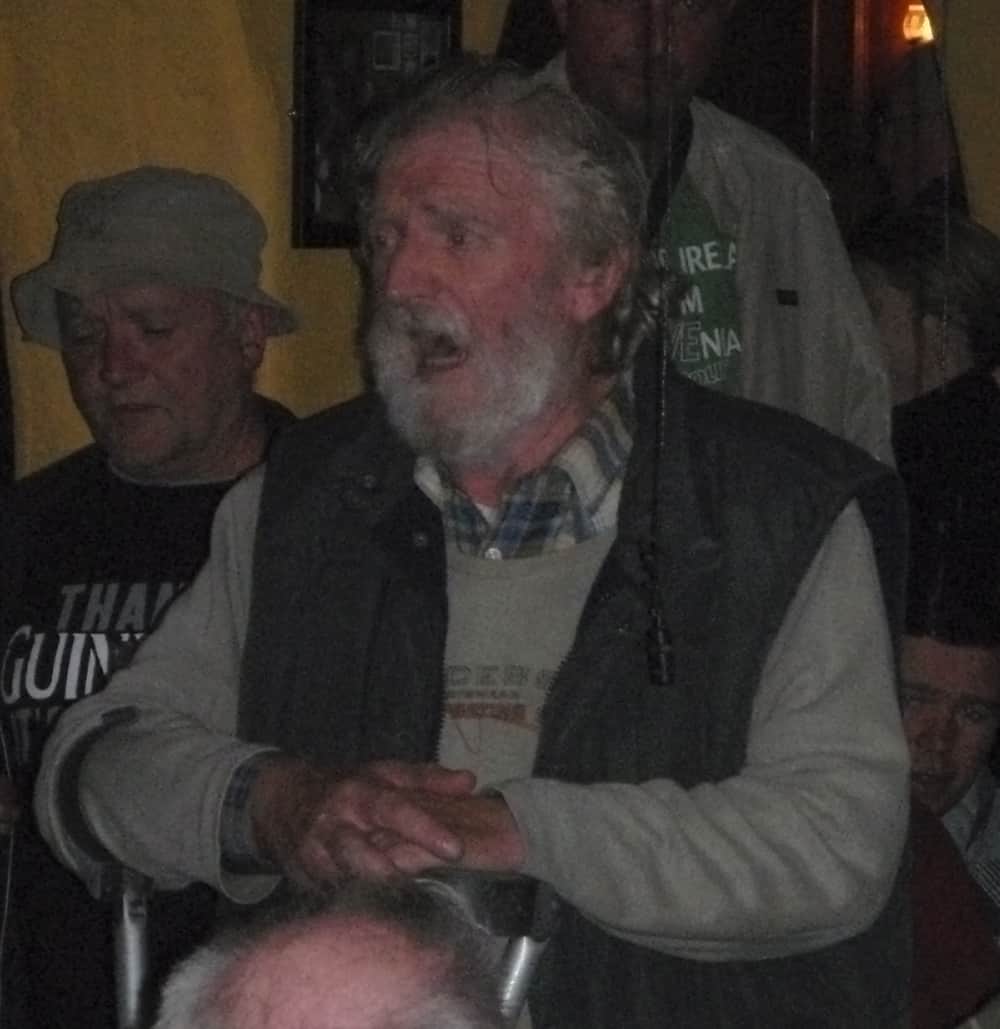 A local fisherman joined in for a song

Visiting Ireland wouldn’t have felt right without experiencing our fair share of the pub life ? it would be like going to Italy and not eating pasta. But after enthusiastically embracing the pub culture for 8 days or so and enjoying the warmth that it provided both inside and out, we were looking forward to taking on what Italy had to offer.

At least fettucine doesn’t give you a headache.

TIP: If you’re going to Northern Ireland, remember that the currency there is the British Pound, not the Euro that is used elsewhere in the Republic of Ireland, so try to have some on hand, or you might find yourself trying to pay for that pint with the wrong currency.