If you read the title and put the two words “Stupid” and “Colombia” together, it would be understandable if your imagination runs a little wild thinking of the worst possible scenarios that Henk might have gotten himself into.Things like: had he decided to dabble in cocaine and been arrested? Maybe he was flying his drone a little too close to a covert guerrilla base in the hills? Or maybe Henk just wandered a little too far off the tourist path in Medellin, a city once touted as the world’s most dangerous?

Henk’s ‘stupid’ was a split-second lapse of attention while framing a photograph. But that split second ‘whoops’ left me scrambling to find a pharmacy, having to leave a woozy husband on a concrete bench in the centre of Medellin. The mishap also reminded me of a few tips that even as healthy travellers we need to remember. More on that later, but first the accident:

An Easy Day in Downtown Medellin Henk and I had been going pretty hard for over a week, running around visiting most of Medellin’s sights and attractions with my typical enthusiasm to see ‘everything’. So having clocked more steps than even my Fitbit cared to count, we decided to make it an easy day and go for a stroll through the city’s downtown core. We had read that there were a few things to see there, and thought it would be a good opportunity to do some urban photography.

Taking the Metro to Alpujarra station, we weren’t sure what we were looking for exactly as we walked past some rather ordinary 80s-era government buildings, but as we climbed the stairs to an expansive plaza, an enormous sculpture suddenly came into view. Dominating the square in front of the José María Córdova Administrative Centre was the soaring concrete sculpture called the ‘Monument to the Race’ by Rodrigo Arenas Betancur. Betancur is a famous Colombian sculptor, well known for his heroic subjects who all seem to be reaching towards the heavens in dramatic postures.

Betancur’s sculptures all reach for the heavens, like the equestrian topper on his El Desafío piece Details in the concrete Monument to the Race Betancur sculpture

Needless to say, the cameras came flying out as both Henk and I approached the giant sculpture, snap-happy and all eyes focused on the soaring structure. The sculpture was so large, in fact, that I immediately headed off on my own to the far side of the square to try to squeeze it all into my iPhone’s frame, racing to capture some dramatic clouds that were rolling in as the perfect backdrop for the shot. 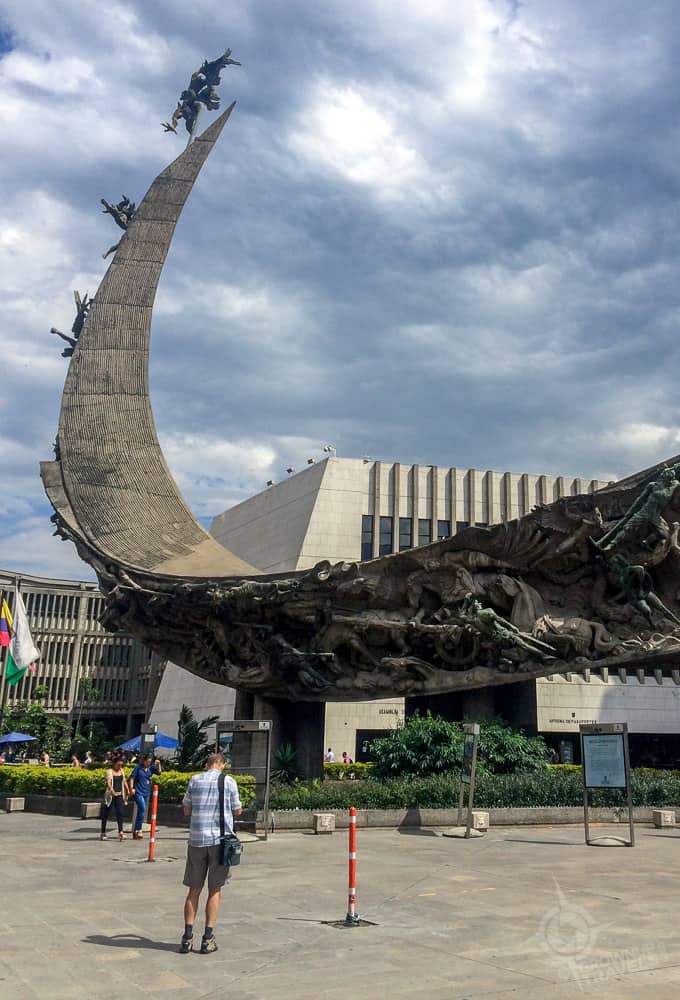 Henk focusing on the photo job at hand

A minute or two later, having snapped a few photos, I looked back for Henk, only to spot him at the base of the sculpture, limping over to a concrete bench and holding onto his leg while grimacing in pain. My first thought was that maybe the last week of walking had finally caught up to his knees, but when I reached him, his first words to me were: “I’ve cut my leg, and it’s bad. Really bad.” He had a wad of kleenex that he was holding to his shin, and he was looking white. Instantly worried, I helped him sit down on the bench, asking what happened and trying to understand what could have occurred in the few minutes I had been off doing my own thing.

A Split Second of Inattention

Henk explained that he had been looking up at the sculpture, watching those same clouds move behind it, all the while trying to compose the perfect shot in his camera’s viewfinder. It was a split-second lapse that did him in. Normally he is careful to always look ahead and around him before moving in for any shot, but this one time, he had kept his eyes locked on his camera instead, and walked right into the 90-degree corner of a concrete bench (the same offending bench he was now sitting on). But even as he fell to the pavement, leg split open, in true photographer mode, he acted quickly to ‘save the camera’ by tossing it into the plantings at the base of the sculpture. No Canons were actually harmed in the making of this article.

Now, here’s the thing with Henk that I’ve learned over the years: he’s not good with blood. Call it his Achilles heel, but blood is the one thing that can take him down, turning him into a woozy, white-faced weakling faster than you can call 9-1-1. One glance at the depth of his cut, and he knew he would likely pass out if he didn’t staunch the flow, so he quickly grabbed some tissues and jammed it against his shin. “I think I might pass out”, he tells me, as my mind now goes into I-don’t-speak-Spanish-do-I-even-use-9-1-1-here-what-do-I-do-in-an-emergency mode.

“I have to look at it”, I tell Henk, as I’m quickly trying to assess whether this injury calls for a first aid kit, a few stitches or an ambulance. He lets me peel back the kleenex, and I realize the cut is deep, but definitely not life-threatening, and if I can get a good bandage on it, he should be fine, at least in the short term. Henk can’t even look at the cut and is getting even paler.

“Okay”, I tell him. “I think it will be fine, but I’ll need to go somewhere to get a bandage. Are you going to be okay if I leave you here?”

“I think so”, he answers, but as he says this, I’m also now thinking: if I’m gone and Henk does pass out, there’s a lot of expensive camera equipment on him that makes him a pretty attractive target for even the most scrupulous of passersby. So I decide to grab his camera bag to secure the equipment, and off I race to try to find a farmacia, cameras and lenses bouncing along with me. There are many times when I love having a smart phone. (Mostly it’s so that I can prove to Henk that I’m right – right then and there – mid-argument.) But as a traveller, a smart phone has come to my rescue on many occasions. This time, it was thanks to a Google Translate app that I had loaded, which I fired up as I looked around for help, deciding to approach a professionally-dressed couple who looked like they worked in the area. Using the app’s English-Spanish translator, I explained that my husband was hurt and I needed to get a bandage. The couple directed me to a farmacia, which fortunately was not far from where I had left Henk.

Once at the farmacia, I was able to use my little translation app again to ask for gauze and tape (because who has THAT in your guidebook of useful phrases?!), and in less than 10 minutes after I’d left him, I was back at the square administering to Henk, who had gotten back his colour and was looking a little more like himself.

“Stupid, stupid, stupid,” was all Henk kept saying as I bandaged up the gash on his shin while he looked everywhere but. “I know better than to walk blindly when I’m shooting!” he berated himself. Alternating between this lament (and applauding himself for thinking quickly and saving his camera), Henk managed to limp over to a cafe where we sat down to regroup and decide whether we wanted to continue our day or head back to our rental apartment.

4 Emergency Tips to Remember When Travelling

Henk and I did decide to return to the apartment that day, more because the day had gone sour than due to his actual injury. In the end, Henk’s cut healed fine with a little antiseptic and no need for stitches. And we did return to downtown Medellin another day to capture more photos. Henk goofing around in downtown Medellin

But the entire incident was a sober reminder of one of the things Henk and I tend to take for granted when we travel – our health. It also made us realize that there are a few tips that every traveller should follow, regardless of their age or physical condition. Here are 4 of the most important emergency tips to remember when travelling:

Just as a final thought, I think Henk was being pretty hard on himself when he referred to this accident as his ‘stupid’ moment. This kind of slip-up can happen to anyone, anytime, anywhere.

Buying cocaine in Colombia, on the other hand – now that’s stupid.