8 Reasons Why You Should Visit Medellin, Colombia Several years ago when we visited Colombia for the first time, Medellin was not part of the itinerary. But contrary to what you might think, this had nothing to do with its ’90s reputation for violence, but more because our trip was focused on adventure, not urban culture. So this year, when Henk and I were lucky enough to win airfare to visit Colombia, we knew we wanted to focus on Medellin for almost our entire visit. Why, you might wonder, would we choose a former drug king’s hometown as our destination? Here is my answer, including 8 reasons why you should visit Medellin, too:

Let’s start with some context for just how dramatic Medellin’s turnaround has been and why this is a city on the rise: Despite having visited Colombia twice now, I have to admit that as an outsider, this country’s history of internal conflict is still a bit confusing to me, particularly when it comes to sorting out who is fighting who and for what reason. It’s no secret that Colombia – and the city of Medellin in particular – was once considered the most dangerous destination in the world, thanks in part to the likes of Pablo Escobar and his cocaine empire that was based here. But this drug smuggling component was only once piece of what I’ve begun to understand is a complex and multi-faceted puzzle when it comes to explaining the violence that has plagued Colombia for 50 years.

Like the proverbial chicken and egg discussion, the drug trade in Medellin is as much the result as it is the cause of much of the internal violence and instability that Colombia has endured for decades. Racial, social and economic injustice, political corruption, greed, and opportunistic individuals and groups all contributed to a perfect storm that resulted in a civil war in Colombia that saw the rise of guerrilla and paramilitary forces battling the goverment’s own military for control of the country, with corruption running rampant throughout all factions.

A powerful street art series reflects the citizen/guerilla changes in Colombia…but depending on whether you view from left to right or the opposite, there are 2 very different interpretations

Throw into this mix the rise of cocaine in the 80s and 90s as the drug of choice in North America combined with the perfect geographic and social conditions to allow for its ‘growth’ as an industry in Colombia’s isolated mountains – and the temptation for all parties to exploit this money-maker was just too great to pass up. The result was of course, an even more explosive period in the history of this already much-troubled country, with Medellin as its centre.

But all that has changed.

2. Transformational Change in the 2000s Transformation is a word you hear a lot in Medellin today, and there is good reason for it: the change that this city has undergone in an incredibly short period of time is nothing short of revolutionary (in the best sense of that word).

Pablo Escobar is long-dead (and his former palatial estates have been reduced to ruins where visiting gringos pay to play paintball – no joke, it’s a thing!); neighbourhoods once feared as breeding grounds for crime have been taken back by their own communities who have had enough of the violence; a transportation system that is the envy of South America now links once-isolated barrios with the rest of the more prosperous neighbourhoods; and most importantly, peaceful dialogue between government and guerrilla factions have resulted in a recently-ratified peace accord that was over 5 years in the making. If you didn’t know its former reputation, and came to Medllin for the first time as we did in 2017, it’s my bet you would be pleasantly surprised and impressed with this innovative Colombian metropolis – and metropolis it is. Greater stability and lower crime has been accompanied with a rejuvenation of Medellin’s downtown core with art installations, libraries and museums; and modern cultural and urban attractions (like the Planetarium, Parque Explora and the Botanical Gardens) mean there has been an influx of innovative architecture and construction in Medellin. Medellin’s Jardin Botanico Orchideorama canopy is beautiful from below… …and even more interesting from above

Medellin also boasts the only Metro system in all of South America, a modern transportation network that is more than just a way to move the millions who call this city home – it is also a great source of pride for its citizens. You will see no graffiti or vandalism on their Metro, no eating or drinking, no rambunctious or impolite behaviour, all self-regulated by the passengers themselves. In fact, this very civilized etiquette known as ‘Metro Cultura’ was actually taught in schools when the metro was first introduced (certainly some North American cities could take a lesson from Medellin’s example when it comes to teaching good metro manners…) Medellin Cablecars are an innovation in social accessibility

Beyond the Metro trains, one of the most innovative developments in Medellin’s transportation system is the installation of multiple cable car routes (and escalators in some neighbourhoods) that literally rise up the sides of the valley in which Medellin lies, and provide access to the residents of the steep barrios that are built up the sides of the mountains.

These neighbourhoods are some of the poorest, but the gondolas have provided access both physically and socially for barrio residents, many of whom now are now able to work or go to school in other parts of the city. And for tourists who are visiting Medellin, at less than $1.50 a ride, these gondolas are the best deal going if you want to take in some of the most spectacular views of the valley! It’s not just the poorer barrios that are benefitting from a more peaceful city: Medellin’s more affluent neighbourhoods are thriving as well, with the influx of foreign investment and visitors: El Poblado boasts the city’s best real estate, where a forest of modern condos rises between green spaces and where the city’s nightlife pulses till the wee hours on weekends. Parque Lleras and Parque Poblado are at the epicentre of this and more recently, Manila has grown its “restaurant row”  to include several blocks of trendy and high-quality newcomers (we loved this area in particular).

High-end shopping malls like Santa Fe and El Tesoro are here, too, and the ‘Golden Mile’ on Avenida Poblado remains the financial heart of the city and is home to 5-star hotels and restaurants. Other areas are emerging as the newly-prosperous city continues to grow, like Laureles, poised to become the ‘next Poblado’ as more people are investing in the city, and former residents are now returning from abroad. (We met one of these re-patriots whose family returned here 10 years ago after fleeing to the U.S. in the 90’s.) 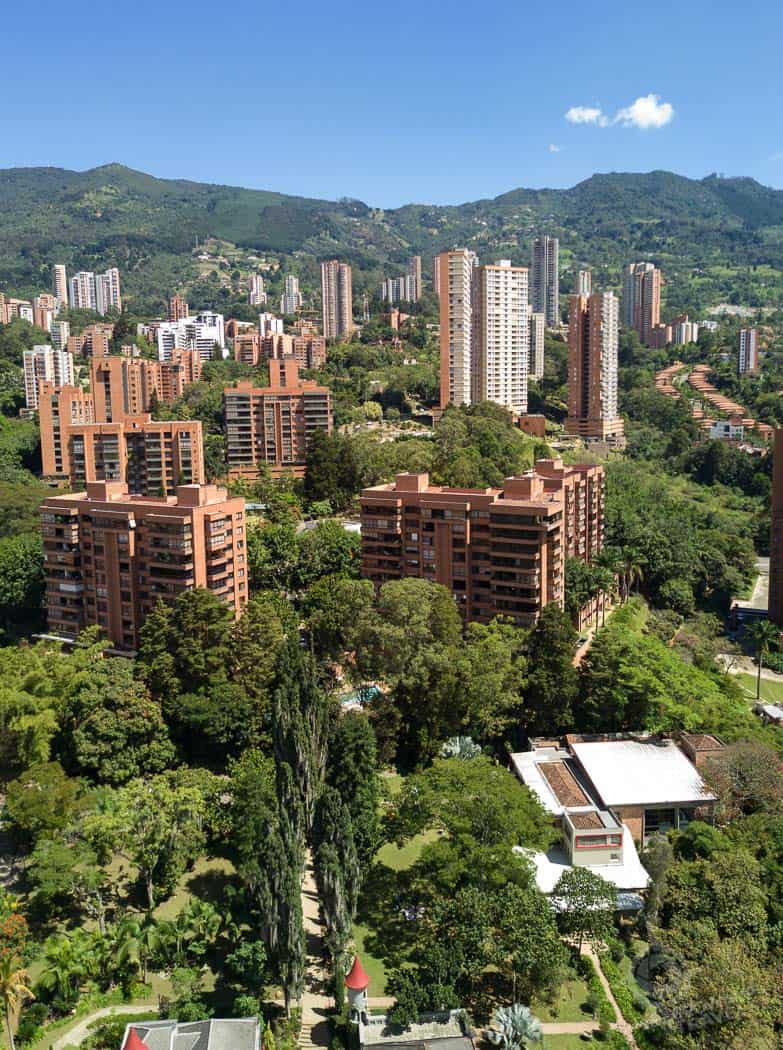 El Poblado is one of Medellin’s most affluent neighbourhoods, but others are prospering now as well

6. A Foodie Destination on the Rise You could live in Medellin for months and probably not eat the same meal twice, so great is the variety of restaurant offerings in this city. We sampled everything from Colombian fast-food arepas and empanadas at simple storefronts to 5-star sirloins served at luxe restaurants owned by European-trained chefs. If molecular gastronomy is your thing, you’ll find that here, too, and like the international city that it is quickly becoming, Medellin has its fair share of international cuisine represented here as well – all of this a testament to the tastes of both the locals who live here and the visitors who are coming in greater numbers.

Medellin is located in the beautiful Aburrá Valley

The first view you’ll get of Medellin is as you descend a mountain coming in from the airport, and it’s one of the best first impressions you’ll get of a city, day or night. Nestled in the Aburrá valley in Colombia’s Andes mountains, Medellin is spread out along the river, rising up both sides of the valley into the mountains on either side. With its contrast of red brick neighbourhoods against green hillsides, high-rises and winding streets, there’s no denying that Medellin is one pretty city. And with a climate that the paisas (locals) describe as “Eterna Primavera” (Forever Spring), it’s no wonder many foreigners are now investing in Medellin as a retirement destination.

Medellin has come far in a very short period of time and the future looks promising for this city. Even in the two weeks that Henk and I were there, we met foreigners who were looking to invest in real estate, we met re-patriated Colombians who have returned home after a 20-year absence, and we visited neighbourhoods where community leaders are engaging the next generation through art and music, collectively saying no to violence. Medellin is not perfect, by any means, and yes, there are still places that I would not want to venture after dark (the same can be said for many world-class cities around the world), but the good far outweighs the bad. And Medellin’s rise in recent years has become a source of pride not just for its residents, but for all of Colombia. I’ve offered up only 8 reasons why you should visit Medellin, Colombia, but this is just the tip of the iceberg (with more posts to follow about our time in the city). But I can honestly say that if someone asked me if I would return to Medellin, my answer would be “In a heartbeat.”

Because this city’s heart is literally pulsing with new life.

TIP: Right now, the exchange rate on the U.S. and Canadian dollar is particularly favourable in Colombia, even in a metropolitan city like Medellin, making all these grownup attractions that much more affordable! So what’s keeping you?