Killer Fashion and Shoes to Boot If you thought sky-high stilettos were painful, try strapping a little arsenic-laced silk around ‘the Girls’.

No, it’s not a new Sex and the City horror movie spoof, (although the last SATC sequel was pretty scary), it’s the Fashion Victim exhibit on now at the Bata Shoe Museum in Toronto. And its fashion items are to die for. Despite having driven by its crushed-shoe-box-inspired architecture countless times, I’d never visited the Bata Shoe Museum here in Toronto until this month. And although I’ve developed a bit of a thing for shoes in the past decade or so, what drew me instead to the museum was an exhibit of some intriguingly dangerous 19th century fashion. (Plus if I had to admit it, probably a bit of a personal fascination with torture as well.) But it wasn’t just the wearers who became fashion victims in this case, it was the manufacturers of these items as well. Here’s why: 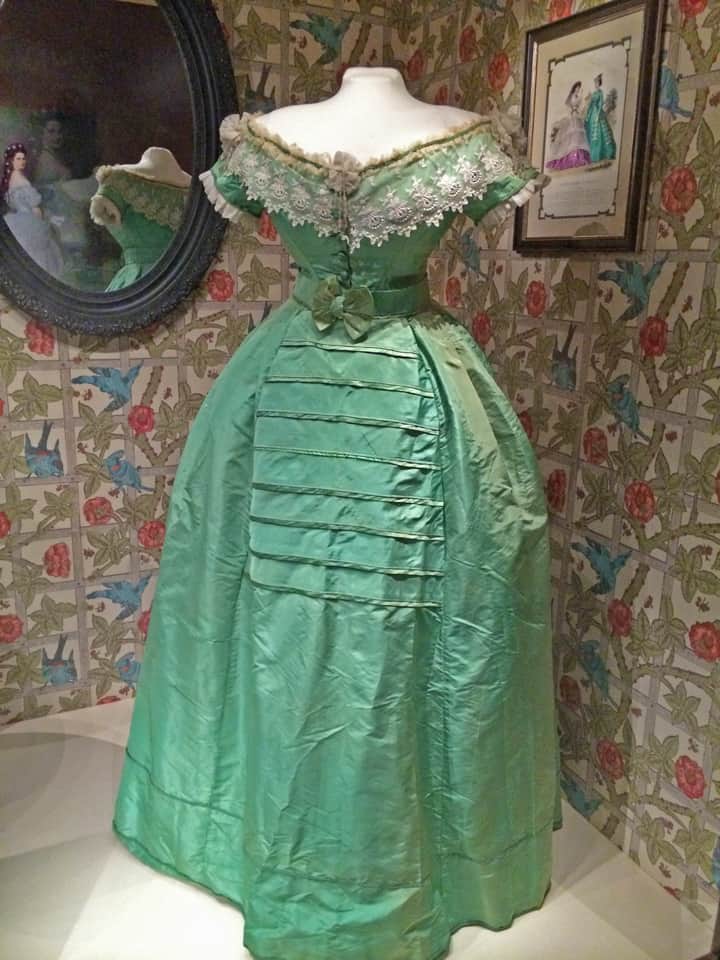 Arsenic and Old Lace. Deceptively benign-looking, this gown was doubly dangerous for the woman wearing it, first because of its fashionably infamous colour known as Paris Green or Scheele’s Green which became popular in the late 18th and early 19th centuries. The ‘drop dead’ gorgeous colour got its vibrancy thanks to arsenic in the dye which had wearers with sensitive skin breaking out in painful rashes from contact with the fabric. Dresses were actually less of a threat than stockings and underwear (yikes!), but the cases of women literally dying from inhaling the toxic arsenic particles released during normal ‘wear and tear’ became a sensationalized subject of the day. The Punch cartoon below even caricatured the risk posed to both man and woman merely by dancing in or near the garment. And thanks to the predominant use of arsenic in dozens of products, if the dress didn’t kill you, the equally fashionable green wallpapers of the day just might. (Even today Farrow and Ball have a paint colour called Arsenic which is thankfully free of the poison, but hideous nonetheless.) 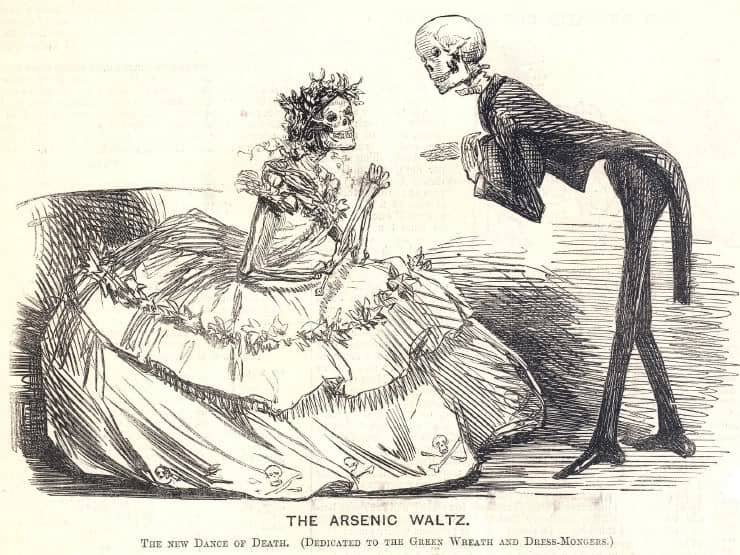 Fashionable Fire Traps. Beyond its toxic fabric, the hoop skirt and highly flammable crinolines beneath this poisonous dress presented another serious threat – from fire. With larger skirt circumferences all the rage, women were often unaware when their skirts brushed too near the fireplace, until suddenly the hooped enclosure they were wearing became a crinoline-fuelled fabric chimney. In the 1850s, nineteen women went up in flames in England in one 2-week period alone, and 9 ballerinas burned to death in Philadelphia shortly after. Like hair in the 1980s, bigger was definitely not better. “Mauve Measles”. If you are a fan of purple like I am, we are in good company. Purple has always been associated with royalty, since only the richest of the rich could afford the expensive dye used to produce garments of that colour. Which of course made it all the more desirable for all the wannabes. So in 1856 when a new manufacturing process using coal tar sludge made it possible to produce affordable dyes in brilliant, saturated colours, the mauve colour used in these boots became all the rage. The problem with this ‘poor man’s purple’ was that the sludge used in coal-fired Victorian England may have been plentiful, but it was also extremely toxic. It wasn’t long before the mauve mavens of the day soon developed violent skin reactions nicknamed ‘mauve measles’ after wearing the items. Not exactly a regal look. Heels start to get higher later in the century

Naughty Naughty. We can’t talk Victorian without talking about sex. Although it isn’t true that piano legs were covered up for being too scandalous, it is true that ladies’ legs were strictly off limits in fashion. Yet it is during this uptight era of high collars and long skirts that high heels emerged as the style of choice when it came to the boudoir and all things suggestive. Which is probably why this particular pair of boots was designed to look like a stockinged leg in a shoe, so that even a glimpse of these 3 inch gilt heels under those firetrap skirts would give any man a foot fetish. Or any woman a shoe one. Gams would look gorgeous in these gilt beauties.

Who Needs Toes Anyways? I get that 150 years ago, people were smaller, but just looking at the size of the footwear in this exhibit makes my toes cringe. I’m not sure what size these women (and men!) wore, but I would be lucky to fit 3 of my 5 toes into any of the shoes displayed in the exhibit – and not including my big toe. Apparently narrow, slender feet were a sign of refinement, to the point where fashionistas would pre-bind their feet in order to squeeze into these trendy booties. Looking down at my mauve-painted toes comfortably splayed out in flip-flops, I was quite happy to be part of the more pedestrian class of pedestrians. Skinny feet were a sign of elegance and style for both women and men of a certain class.

And speaking of binding. Although it was the Fashion Victim exhibit that drew me to the museum, I actually found the permanent collection equally interesting, particularly the historical displays showcasing shoes from different cultures and time periods. I was particularly fascinated by the beautifully embroidered and impossibly tiny ‘lotus foot’ shoes crafted to fit the mutilated feet of status-conscious women in China. The foot-binding practice that produced deformed, hoof-shaped feet originated as early as the 11th century and continued until 1949 when the Communists were finally able to enforce its strict ban and eliminate the custom once and for all. If nothing else, at least all the People’s feet were finally free. 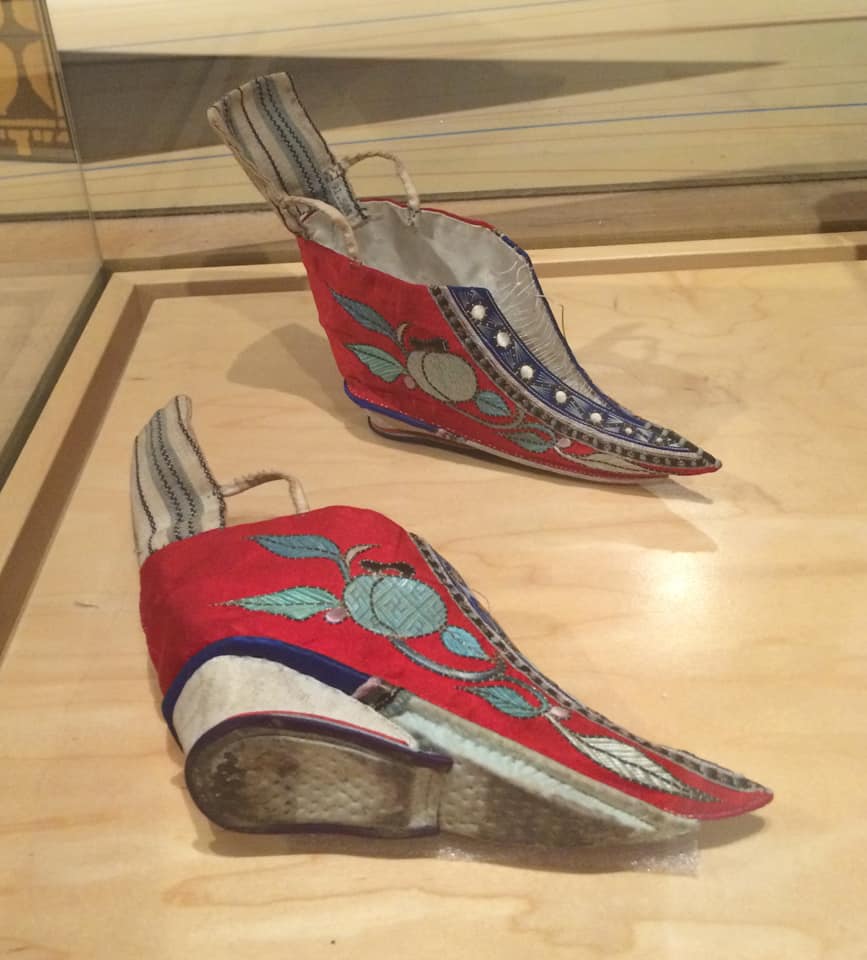 Lotus foot shoes. The idealized foot length for a lady was a mere 3 inches! When foreigners deemed foot binding barbaric, shoes were made to appear more Western.

From Chestnut Crackers to Beiber’s Kicks. The museum has its share of oddities and rare finds as well, whether it’s an actual moon boot worn by an astronaut, or a pair of red heels worn by Marilyn Monroe. There’s even a giant basketball shoe once owned by Shaquile O’Neal, and a pair of Justin Bieber’s high tops that trophy-hunting fans would kill to get their hands on. Fortunately, like all the originals in the museum, these are all kept well secured behind glass. These look like some sort of torture device, but are actually boots used for crushing chestnuts.

I have to admit that I was surprised that a museum devoted to one article of clothing would offer so much of interest, and I would recommend you visit even if you’re not a shoe fanatic. Because whether your style is Marquis de Sade or Sarah Jessica Parker, the Bata Shoe Museum is sure to have something that fits.

TIP: The Fashion Victim exhibit is on at the Bata Shoe Museum until 2016, and if you go Thursdays from 5 to 8, admission is by donation ($5.00 is suggested instead of the usual $14) so you’ll more than get your money’s worth.