Dilly-Dalí-ing at the Dalí Museum

It’s as beautiful a building as the artworks it contains, thanks to its architect, Yann Weymouth, who worked as Chief of Design on the Grand Louvre Project. And within its walls you’ll find the largest collection of Salvador Dalí artwork outside of Europe. But if you go looking for this museum in New York, or Chicago, you’d be looking in the wrong city – because the Dalí Museum makes its home in St. Petersburg, Florida. It’s understandable if St. Pete’s is not the first city that comes to mind when you think about fine art, and certainly not one that is associated with Spain’s most famous surrealist. Better known for its pristine white beaches and clear waters, St. Petersburg may have seemed an odd choice for the home of a Dalí Museum. But it was here, after a nationwide search for a location, that the collection’s owners, Reynolds and Eleanor Morse, chose to establish the first Dalí museum in 1982. And in 2011, twenty-nine years later, a new building was constructed to accommodate the growing numbers of visitors, and to provide a storm-proof home for Dalí’s art. Constructed with 18-inch thick concrete walls and 1.5 inch-thick glass, including a 75-foot tall glass entryway known as the ‘Enigma’, the museum boasts a graceful spiral staircase that carries you up to the permanent collection of Dalí paintings. Included here are 7 of the 18 ‘masterworks’ Dalí painted (large-scale canvases that took over a year each to complete) as well as hundreds of other oils, watercolours, drawings and photographs.

While there are too many works to feature everything in this post, here is a glimpse into some of Dalí’s paintings that impressed me the most and why I found them interesting: 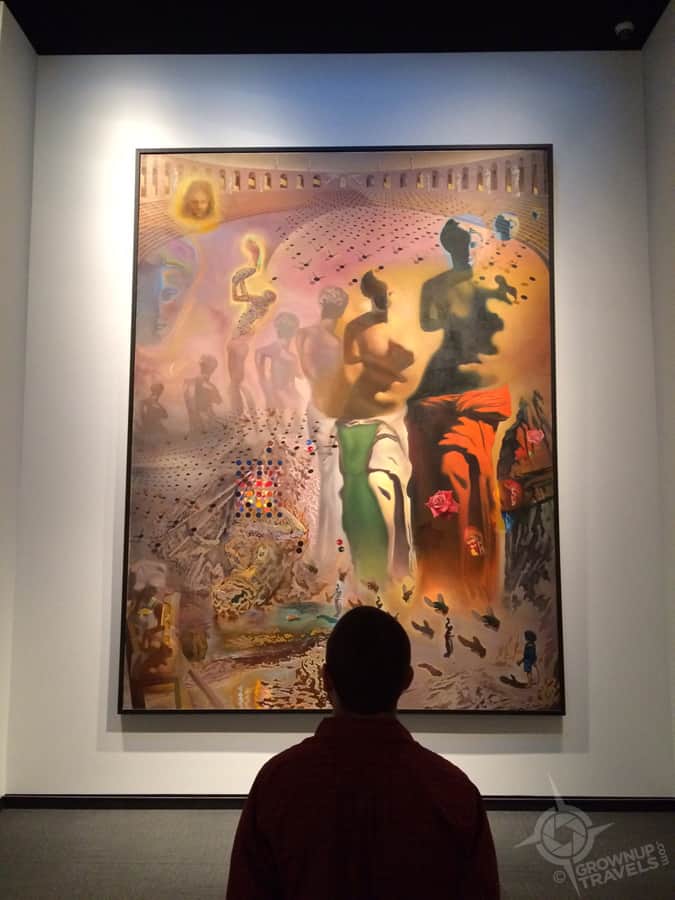 Dali loved to play with images-within-images, and does so in multiple paintings where if you look from a distance, another image emerges from the ones used to fill the canvas. Whether that was inspired by drugs, like the title of this painting suggests, the effect makes you look more than twice at these images. For example, do you see the image of the Toreador’s face created by the use of shadow on the Venus, and framed by a wide-brimmed hat? Like the Spanish bullfighter battling the bull, Dalí wages his own battle with these complex images to tell a visually layered story.

Another example executed in a completely different way is this masterwork which, when viewed close up, appears to be a woman (Gala, Dalí’s wife was his muse and model) looking out a window at a fiery sky and ocean. But when you stand back from this massive canvas, you see the face of Abe Lincoln emerging as a portrait. Dalí was inspired by an article in Scientific American that suggested that 121 pixels was all that was required to capture an individual’s face. So he painted those 121 pixels on a giant scale, and the effect is impressive to say the least. (Try squinting to see Honest Abe even better.) Standing back from the 8-foot high canvas ‘Gala’ you see a portrait of Abe Lincoln.

Dalí’s smaller works are equally complex, including this next one:

Slave market with the disappearing bust of Voltaire “Slave Market with the disappearing just of Voltaire” Salvador Dalí 1940

This 25-inch oil painting has all the complexity of the artist’s masterworks, in which Dalí paints Gala again, this time contemplating a bust of Voltaire (the white face) which appears to be dissolving into the figures of merchants at a slave market (the heads of the merchants form the bust’s eyes). According to the artist, Voltaire’s way of thinking made him a slave to the rational and removed the mystery in life. 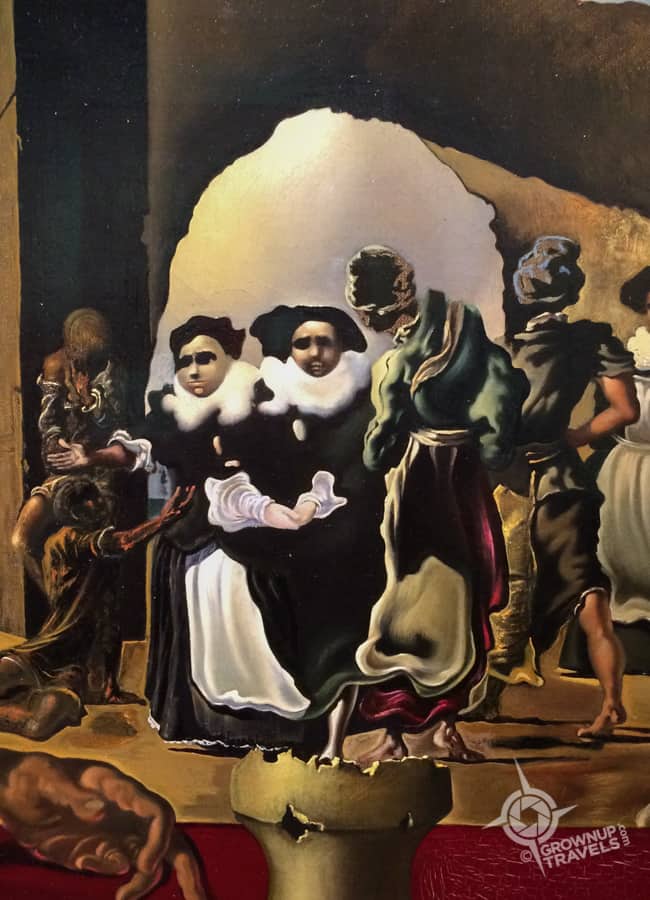 (Philosophical differences aside, I find it an interesting visual challenge to try to see each image in its own right and bounce back and forth between them.)

Portrait of My Dead Brother Dalí was clearly the product of a dysfunctional family, at least in the way he interpreted his role within it. Named after his father, Salvador Dalí Cusi, AND his pre-deceased older brother who died as a toddler, the artist Dalí considered his dead brother to be “a first version of myself” and believed that his parents wanted him to be a replacement. (No issues here!) As messed-up as that sounds, I was intrigued by the actual execution of his brother’s portrait, where the pattern used to create the face is actually made up of cherries. And apparently the two cherries that are joined represent the two Salvador brothers.

Finally, I have to include at least one painting in this post that is probably more recognizably ‘Dalí’ in its lighting, and distinctive technique, and this one stood out for me:

Geopoliticus child watching the birth of the new man Anyone who has seen some of Dalí’s most famous ‘melting clocks’ images will recognize his artistic technique in this painting, although when he painted this canvas, Dalí was actually breaking away from surrealism. In fact, he references the Renaissance as his inspiration and the emergence of America as a new nation (that’s the idea with the man coming out of North America on the ‘egg-like’ globe). And since Dalí had fled war-torn Europe in 1940 to make his home in the States, there is some speculation that he is the ‘new man’ emerging from the egg. Whether that is true or not, the fact remains that if Dali had not come to America, it is unlikely the Dalí Museum would exist, since it was in America that Dalí was introduced to many patrons and collectors, including the Morses. And the fact that such a collection makes its home in St. Petersburg, Florida means that this city can justifiably consider itself an ‘artsy’ destination.

TIP: Admission to the Dali Museum costs $24 for adults, with discounts for special ages and groups. This includes the audio guides (definitely a MUST if your visit doesn’t coincide with a scheduled tour. Call Visitor Information to find out when these happen). Your ticket also includes any special exhibitions as well, so give yourself enough time to take everything in!

Special thanks to Visit St. Petersburg/Clearwater who hosted my visit to the Dalí Museum.