A few nights ago, I stumbled on the BBC documentary Attenborough And The Giant Dinosaur, the story of the fossil discovery and reconstruction of a new species of Titanosaur, and the world’s largest known dinosaur. I was surprised to learn that while Argentina may lay claim to being the home of this behemoth of the prehistoric world, Trenton, Ontario has bragging rights of its own: this small town is home to Research Casting International, whose job it was to produce casts of the original skeleton for a life-sized model of the 35-metre long Titanosaurus built during the 2-year filming of the show.

This was quite a coup for the Canadian company, but then again, they’ve been providing replicas of dinosaur skeletons to many of the world’s most important museums for decades, including our own Royal Ontario Museum here in Toronto (the ROM). Lucky for me, I had a chance to see some of their incredible work when I was allowed to tour the ROM’s Age of Dinosaurs Gallery recently. The best part? I was invited to ‘shoot’ these beasts before the museum even opened to the public, as part of the museum’s ‘#EmptyROM’ event for photographers and instagrammers!

What’s longer than a Futalognkosaurus? The massive Futalognkosaurus, one of the titanic sauropods that roamed prehistoric earth.

Few museums make the kind of first impression that the ROM does with this guy, the Futalognkosaurus, a 26-metre long sauropod who stretches almost the entire length of the atrium-like entrance hall. There aren’t many museums that can house a dinosaur this size, but thanks to the Crystal addition, the ROM can showcase this skeleton in all its glory – making Futalognkosaurus the perfect introduction to the museum’s dinosaur collection. (Of course, this Cretaceous giant is still metres shy of the Titanosaurus’ height and length, whose life-sized cast is currently on display at the American Museum of Natural History where it doesn’t quite fit into their gallery.) 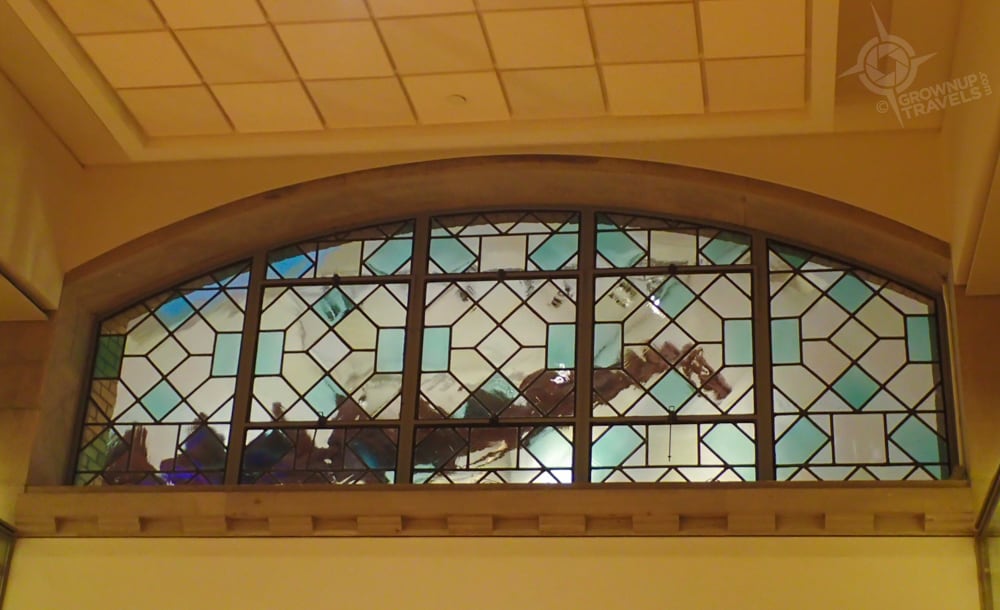 How would you like to look up and see a Futalognkosaurus walking by your 3rd story window?

Upstairs at the ROM’s main Age of Dinosaurs gallery, a 27-metre long Barosaurus dominates the space. Impressive not only because of its size, this Barosaurus is also the largest dinosaur skeleton in Canada built with actual fossil bones (50% of the dinosaur’s bones are real), and one of only three Barosauruses on display in the world. 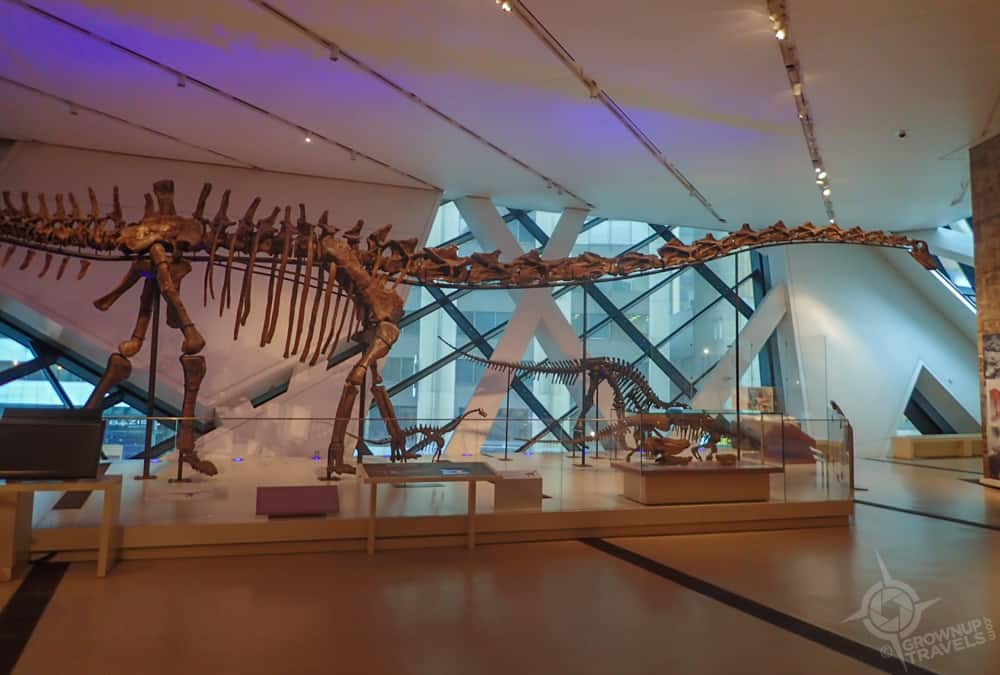 “Gordo” as this Barosaurs is known, is made with 50% real fossil

Ironically, the fact that this Barosaurus belonged to the ROM was discovered almost accidentally. Apparently, the bones had been in the museum’s possession since the 60s, but they hadn’t been catalogued as those belonging to a Barosaurus and had been scattered in different displays around the museum. Now fully assembled in the upstairs space, the skeleton has been nicknamed ‘Gordo’ in honour of the ROM’s former curator, the late Dr. Gordon Edmund, who organized the acquisition of its skeleton decades ago.

My own personal Jurassic Park

Having this entire gallery to myself during  #EmptyROM felt very ‘Jurassic Park’, as I wandered between Triceratops and Stegosaurus skeletons that I remember learning about as a kid, still trying to capture – and comprehend – their immense size. Staring up at these creatures, I kept remembering a line from the first Jurassic Park movie where Tim Murphy reassures a nervous young visitor that a brachiosaurus isn’t dangerous because “It’s a veggie-saurus, Lex!” 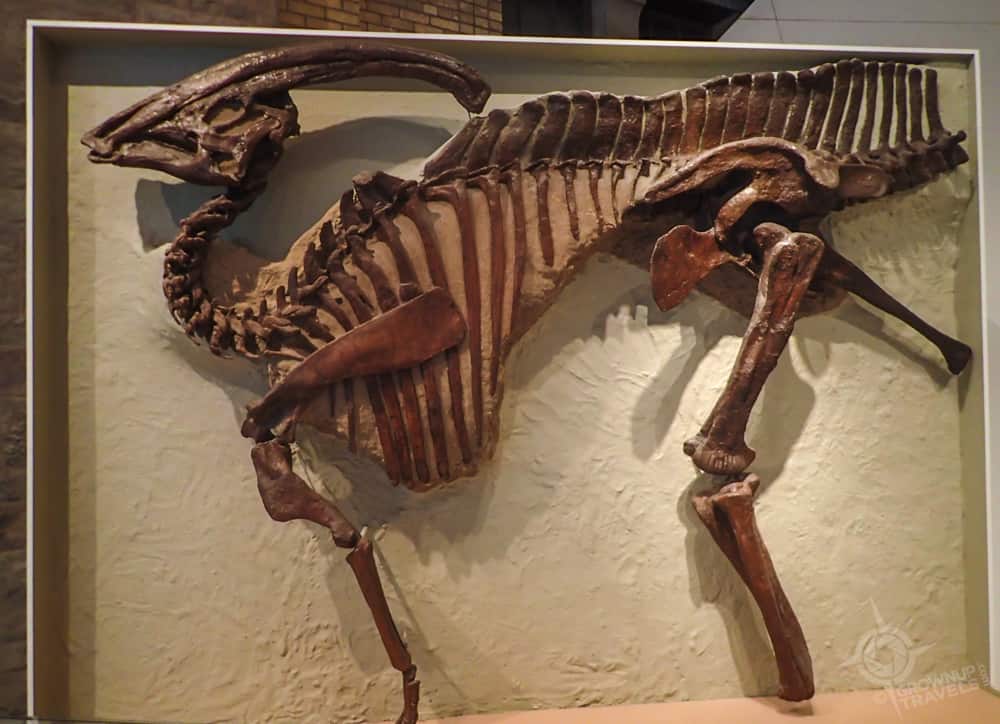 Don’t be fooled – this ‘little guy’ stands about 6 feet tall at the shoulder. Thankful this one’s a herbivore – and long-extinct –  because his head is twice the size of mine.

Of course, mention the word ‘Jurassic’ and you can’t help but think of Tyrannosaurus Rex (T-Rex to the hip crowd), one of the ROM’s  original dinosaur stars before the movies made him one – and now a favourite in visitor selfies. Tyrannosaurus Rex, the star of Jurassic I and II

Wandering around an #EmptyROM meant I had the opportunity to check out other giants as well as the dinosaurs, like this West Coast Totem, one of 4 that have been at the ROM since the 30’s, and which were actually installed before the building was completed around them. Roaming the Halls of the #EmptyROM

The ROM is known for its extensive Chinese collection as well, so I took advantage of my #EmptyROM morning to poke my head into this Gallery for a quick glimpse of some of their statues and stone carvings, which only served to whet my appetite to return for a longer visit. Would you spend a night at the museum?

Since I’ve been referencing movies throughout this post let’s not forget Night at the Museum (where all of the statues and artifacts come to life overnight). Sadly, there is no proof that the ROM’s displays do this, but rumour has it that some paranormal activity does take place in the halls once the public leaves and darkness falls. For example, just above the entrance to the Rotunda is a balcony with the door to what was once the second-floor office of the ROM’s original Director, Charles Trick Currelly. Currelly was a workaholic who spent many a late night at the museum and often slept on a cot he had placed in his office. Director Currelly’s office door is on the left of this now-closed off balcony at the ROM’s Rotunda Hall entrance.

Although this balcony and office have been sealed off for decades, there are many reports of staff seeing a man wandering the halls (the Asian gallery in particular) or pacing the balcony in a nightshirt. There are even employees today who, while working late themselves, feel his presence or hear vintage radio music playing like the kind that Mr. Currelly would have listened to during his own late nights.

If you want to check out these ghost stories for yourself, you can always apply to get into one of the ROM’s grownup Sleepover events, where you can actually spend a night sleeping inside the ROM. The museum organizes separate events for kids and adults – which for obvious reasons sell out quickly, ghosts notwithstanding! The gilt vaulted ceiling of the Rotunda

Like any museum visit, an hour flies by before you know it, and even with no other visitors my #EmptyROM experience was over too soon. But it did serve to remind me that the ROM is truly one of Toronto’s treasures. And while It might have been the dinosaurs and Egyptian mummies that drew me here as a child visiting from out of town, my curiosity to rediscover the rest of its treasures, gallery by gallery, has only increased now that I’m a grownup.

…and those dinosaurs are still waaay cool.

TIP: Visit the ROM on Fridays when the museum is open until 8:30 and get a $7 discount on admission after 4:30pm. For more information on the ROM’s hours and pricing, visit the website.

Special thanks to the ROM for inviting me to participate in their #EmptyROM event.