Getting Steampunked in Coldwater, Ontario! “What is ‘Steampunk’?” was the question almost everyone asked me when I told them I was going to the Steampunk Festival in Coldwater this summer. And the second question hot on its heels was ‘Why Coldwater?” Hosting such a quirky festival was not what you would expect from this tiny village in the heart of Ontario’s Lake Country – but that turned out to be part of its charm.

For those who like to explore local fairs and events, Steampunk is not your typical small town Festival, where you might expect to find oversize pumpkins, antique tractors or classic car collections. So the question “What is Steampunk?” was a fair one to ask, and the answer I cobbled together was this: Steampunk is an aesthetic that combines Victoriana with a Jules Verne-ian vision of the future. This manifests itself in the imaginations of costumed enthusiasts who create and model their outfits and their futuristic ‘inventions’ (which usually involves a lot of mechanical, clockwork or steam-powered inspiration.) Got the picture? Okay, now add in a Wild West Theme on top of it, (because apparently you can ‘steampunk’ just about any subject matter!) and you get an even more creative spin on Coldwater’s 5th annual 2015 Steampunk Festival which drew thousands of people to their tiny town one August weekend. 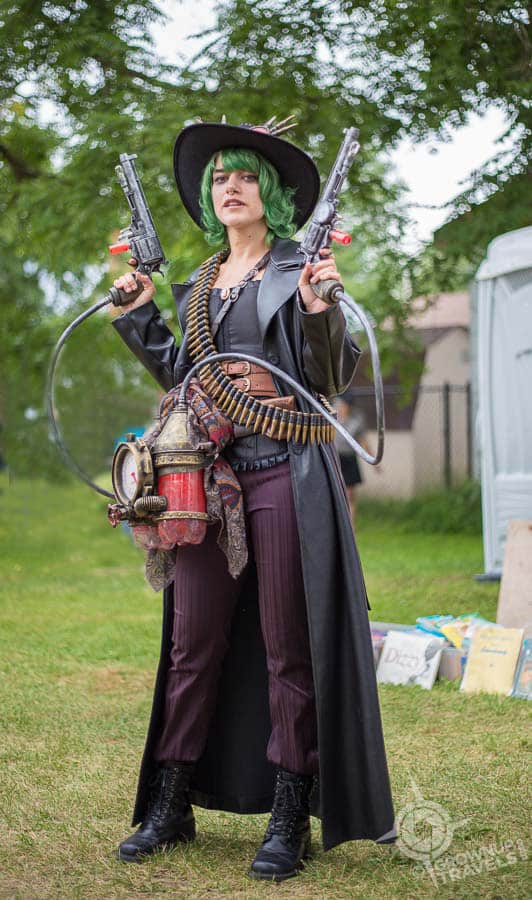 Annie, Get Your Steampunk Gun!

Why Steampunk? Why not? It’s totally fun, whimsical, and as evidenced by the people who showed up for the day, a real family affair. This whole family got into Steampunk fever!

Why Coldwater? The answer from the passionate organizers behind the event was again, why not Coldwater! The village of Coldwater has been reinventing itself for the past decade or so, with new businesses infusing more life – and fun – into the small town. And if the Steampunk Festival is any indication, they’ve been successful in a way only a small town on a mission can be. In the 5 years that the town has been doing this, attendance has exploded, and on this particular Saturday, you’ll find vendors selling everything from Steampunk fashion (think corsets and fascinators) to taxidermy. Throw in some in-season local produce, homemade baked goods, barbecued favourites, local bands and a group of medieval knights, and you’ve got all the makings for a funky family festival. Taxidermy came into its own in Victorian times, often using whimsical subject matter for parlour displays like these mice from SwordintheStone.ca

This festival is really all about visual creativity, and one of the best things about the Festival is that the people who participate are very proud of their creations, and absolutely love having their photos taken! The costumes they put together are intricate and involve a lot of work, so they are always flattered when someone wants to capture them, and are keen to tell you how they made them (with a few exceptions who keep their ‘secrets’ to themselves!) Even the Red Hatters were represented by Faith, Penny and Jessie, 3 Steampunked Society gals who rocked it! And who doesn’t love a Knight in Shining Armor – these ones from the Barrie Swordplay Association!

I’m always up for any excuse to dress in costume, so with only a little tweaking of my regular wardrobe, I was able to get into the Steampunk spirit and be part of all the wild west fun. This Time Traveller kept the secrets to the inner workings of his machine to himself.

The day-long Festival took over the main streets in Coldwater, as well as the Canadiana Heritage Museum, a 6.5 acre outdoor museum just up the road from downtown that houses historic buildings and homesteads from the 1830s (and yes, even those tractors you might expect to find in a small Ontario community.) There was even an authentic sideshow where the protagonist lay on a bed of nails and performed the ‘Human Blockhead’ spectacle of hammering a spike into his nose, much to the chagrin of his partner, Charlotte Tann. Mental Floss Sideshow’s ‘Human Blockhead’ act had the Professor actually hammering a spike into his nose! This tractor came with its own Steampunk engineer! Where else but the Steampunk Festival could you find a Theremin musician?

If you had asked me what I’d be doing this August, I certainly wouldn’t have expected to find myself sashaying around the streets of Coldwater as a Steampunked Saloon Girl, but after hearing about the festival I knew I had to go – and I had an absolute blast! And judging by the rest of the people who flocked to the town, I certainly wasn’t alone.

TIP: The Coldwater Steampunk Festival is held each year in August and is free, and although costumes are not mandatory, they certainly make it more fun for both participants and spectators. Special thanks goes to Ontario’s Lake Country Tourism board who first told me about the event and who hosted my weekend.