I have to admit, there’s a part of me that wishes I had been born just a few years earlier, so that I could officially have been part of the Hippie Generation. I’m sure I’m just romanticizing the era, (or maybe it’s the recent resurgence of bohemian fashion everywhere), but I’m a little envious of the transformation and freedom that came with the 60s, probably because I was too young to experience it. Sure, I wore the bell bottoms and psychedelic patterns, but there was no Woodstock to claim as my generation’s ‘Happening’, or no “Ban the Bomb” rallying cry that defined my politics (after all, I was in grade school.)

Instead, my rebellious twenties were spent wearing shoulder-padded jackets and big hair like the poster children for the Yuppie Generation – corporate climbers pursuing a great paycheck and everything that came with it. How many people look fondly back on that group of radicals? This generation-envy probably explains my fascination with the Burning Man festival in California, and why I feel drawn to go there. Admittedly, the photos that I’ve seen of the art installations and exotic costumes worn by the ‘Burners’ appeal to the creative side of me, but there’s also something about this independent, self-sustaining week-long community that feels very 60s. At least this is my impression from the outside looking in. And there’s certainly lots to look at. 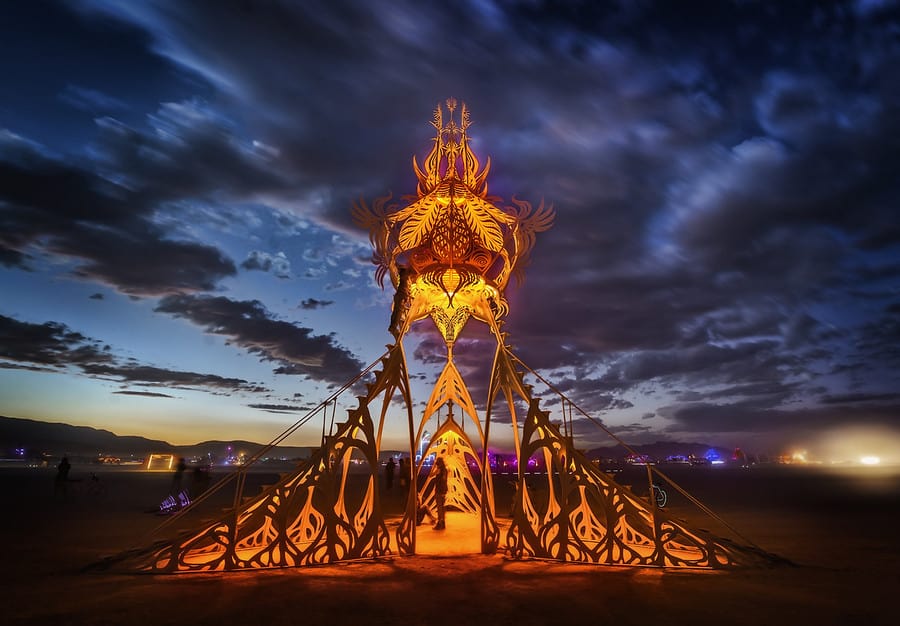 Art on the Playa Image by Trey Ratcliff/ www.stuckincustoms.com Seeing these images of the various art installations on the Playa, what creative person wouldn’t want to put this festival on their bucket list! Especially now before some mega-brand or institution sinks their claws into it, robbing Burning Man of its authenticity. Even though the festival adamantly tries to keep itself free from corporate exploitation, already, wealthy attendees are foregoing the camping in favour of fly-in, catered luxury ‘glamping’, and some brands have surreptitiously used the event for their own advertising – really missing the point of the whole festival. But then, when I think about the fact that a) I’m not a camper, b) I’m not particularly counter-culture, c) I’ve become less and less a fan of crowds the older I get, and d) the chances of me riding a bicycle wearing nothing but blue paint and feathers are pretty slim, I can’t help but wonder if I’m just kidding myself. Have I become too ‘grownup’ for Burning Man, and did I once again miss the boat by one generation?

All of this reminds me a little of the discussions we hear so much of in travel writing circles, especially the part about getting to a country before it gets ‘ruined’ by tourism. There’s also a lot of talk about the ‘best way’ to go out there and explore the world, slow travel versus fast, how and where to get the most authentic experiences, is the younger backpacker style more ‘real’ than cruising or hotel hopping, etc. etc…

I think the reality is, when it comes to exploring the world, the important thing isn’t the how or the when, it’s the why. And if your reason for travel is to satisfy your curiosity, expand your horizons, open your mind to another way of seeing or doing things, or just drink in something that is beautiful, foreign, or exotic, that’s as authentic as it needs to be. It’s okay to be a voyeur sometimes, as well as a voyager.

So maybe I don’t need to be the ‘Burner generation’ to appreciate Burning Man – as long as I appreciate it, it’s not a generation thing at all. After all, anyone who knows me at all knows that I’ll be all over that blue paint and feathers look.

I just need to figure out the camping part first. TIP: Since I haven’t been to Burning Man yet to take my own photos, I’m showcasing the images of Trey Ratcliff, a super talented photographer behind stuckincustoms.com. If Henk and I can get anywhere near the calibre of his photos on our visit to the festival, we’ll be over the moon!