The Pressure to Perform in “Safari School” When we headed to Tanzania for a safari, Henk and I fully expected to be wowed by the wildlife. From African antelopes to big cats, we were hoping to see everything the country had to offer, armed with cameras and lenses to capture them all. What we didn’t expect was that we had unknowingly enrolled in ‘Safari School’.

Getting Schooled on Safari

I’m kidding – there is no ‘Safari School’ – and certainly no amount of studying that can really prepare you for the incredible amount and diversity of animals that you will encounter when going on an African safari. Of course, everyone searches for the Big Five (lion, leopard, rhino, Cape buffalo and elephant) to check off their list, but these animals are a no-brainer to identify – after all, who doesn’t know what an elephant looks like? And even if you’ve never seen a Cape buffalo before, there isn’t anything really similar to confuse you when you do see one. No, the real challenge comes with trying to identify the other more unfamiliar animals, of which there are many, including dozens of African antelopes, birds, even creepy crawlies, most of which we had never seen before in our lives. And we had to spot them and note their differences all while riding around for hours in a pop-top jeep on the Serengeti.

Of course, we weren’t without help. Our guide, William, had eyesight equal to one of the high-flying predator birds cruising the skies, and he could spot a group of snoozing cheetahs under a tree hundreds of yards away that we didn’t see until we were practically on top of them. How many cheetahs do YOU see?

It was because of William that I found myself wanting to prove myself a good student, by showing him that I was doing more than just observing during our game drives – I was actually learning to identify the differences in appearance and behaviour of the animals we were spotting. It killed me when I would mis-identify one antelope for another, and get a ‘tsk tsk’ of disappointment from William. I soon realized that I wanted to be that ‘A’ student from grade school all over again and impress the teacher! And it seemed that it might just be all those African antelopes that might earn me that ‘A’ grade I wanted so badly. ‘Studying in the field’ in the Serengeti

Identifying each different species of antelope is much harder than you’d think, but I was prepared to rise to the challenge. And I thought I would share what I’ve learned (should you want to study in advance for your own safari), with this collection of photos of the beautiful and graceful antelopes we encountered. I think once you see some of them, you’ll begin to see how confusion could easily set in.

Impalas were one of the first African antelopes that we saw, and they are very similar to the deer we have here in North America. Like our deer, only the males have the nice curvy horns, and the bachelors like to hang out together until they can find a herd/harem they can make their own. Once they do, they form larger herds of 20 or more animals, making it easier to identify impalas from other, more solitary species. Male impalas hanging out looking good for the ladies Then there are the Thomson’s gazelles, or as the cheetahs like to refer to them, ‘Dinner’. About the size of a young deer, they travel in large herds, and their distinctive black stripe makes them easy to identify – or does it? Take a look at the springbok…. Young springbok has similar horns and markings to the Thomson Gazelle

When you see how similar Thomson’s gazelles and springboks are, you begin to see how difficult it is to be that “A” student after all. Of course, some African antelopes are easier to identify than others, like the waterbuck, which has a shaggy fur throat (very pretty, actually), and a recognizable rear-end which looks like it sat on a freshly painted toilet seat. We saw our first female waterbuck at the Ngorongoro crater, and then later a herd of them with a male. (he’s the shy guy by the bushes with the impressive horns). This waterbuck was a little skittish, but we managed to snap this shot before she bolted. The hartebeest is a large antelope that became easy to recognize, even from a distance, because of its large ears that made it look like it had two sets of horns (or 2 sets of ears, depending on how you look at it, I suppose.) Count the ears/horns on this hartebeest

Tanzania has some smaller species of antelope as well, like these dik-diks, which we always considered to be the romantic antelope, since you only ever see them in pairs with their mates. Tiny and delicate, about the height of a cocker spaniel, we often spotted dik-dik pairs in the early morning. If you see one dik-dik, look for another.

If you think spotting brown wildlife on the brown grasslands is tough, try finding them in the bush – like this aptly-named bushbuck (which is a bit larger than the dik-dik but no less shy). Definitely not easy pickings when it comes to seeing these wee ones. 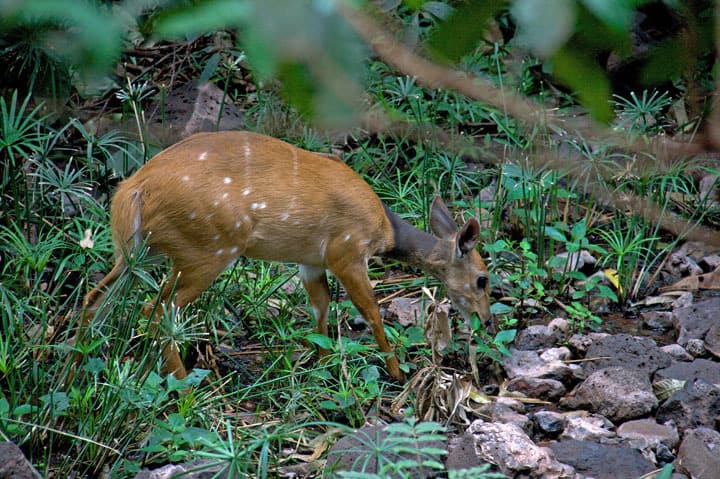 The antelopes you are seeing here aren’t nearly as close in real life as they seem in these photos, making it even more difficult to see which one is which. But I have to admit, by the end of our 10 days or so on safari, Henk and I had begun to impress William with our field guide expertise. We even started calling out the animals before he could point them out. But my Achilles heel was always the Grant’s gazelle: I never did quite manage to get this antelope right (which I think secretly made William happy to know he was secure in his job!)

C’mon, it wouldn’t be school if there wasn’t a Pop Quiz! Time to test your antelope identification skills from what you’ve just seen and read:

Can you name the African antelopes in these two photos? (without cheating and checking the answers below). It’s a little harder from a distance to know what you’re looking at, isn’t it? Did you get them right?

Answers: If you guessed waterbuck and impala in the two photos above, congratulations! It might be time for you to graduate to the ‘real thing’: a safari in Tanzania! And if you didn’t get them right, then you definitely need to go on a safari! Because no matter whether you know come home knowing one antelope from another or not, a safari is one bucket list experience that always gets an ‘A’ for Awesome!

TIP: We were given this book, African Safari Journal before leaving, which became our go-to ‘textbook’ for a number of reasons: part guidebook, part planner, part journal, we used this book to check off animals we saw, record where we saw them, write notes and thoughts, and even used it as a pocket phrase book! Even William was impressed with it! You can get one here on amazon.com.