Why our mountain of camera gear now includes Olympus Only Mt. Olympus’ gods have this little camera’s powers.

It seems that the more you talk photography with people, the more everyone divides themselves into two camps: Camp Canon and Camp Nikon. But Henk and I are an exception to this rule – because like the legendary mountain that a pantheon of gods called home, “Olympus” has made its way into our lexicon of camera gear as well.

Why Olympus? Our reasons are very different, depending on whether you talk to Henk (the techie photographer) or me (the tech-challenged photographer). And while our new Olympus cameras may never completely replace other members in our ‘camera family’, Olympus cameras work hard for us in many situations.

My camera: the Olympus Tough TG-4

Before smart phones replaced many a camera for their convenience and image quality, Henk and I owned an Olympus – one of those shockproof, bullet-proof, ‘Jane-proof’ models that could get dunked, dropped, frozen, baked, etc, and still perform. And our little Olympus performed really well for years, whether it was capturing underwater images in Zanzibar or getting a bird’s-eye view of the turquoise waters of the Caribbean. Sea Urchin at Pongwe Beach, Zanzibar – shot underwater in about 2 meters of salt water. Can your camera do that? Parasailing in the Dominican Republic – going where no smart phone should ever go!

But eventually our Olympus went to join the other gods in camera heaven, leaving me at a bit of a loss when it came to taking adventure photos. Because although I had an iPhone that I loved, the last thing I want to do is to ruin or worse yet, LOSE, that phone! Damaging my phone would mean losing more than just photos: I would be losing data, contacts, emails, connectivity, EVERYTHING!

Olympus Tough TG4 lives up to its name

Needless to say, I was very happy to receive my Olympus Tough TG4 as a birthday gift shortly before travelling to Florida last fall – having this robust little camera along meant I could leave my iPhone securely elsewhere whenever I wanted to do something that I considered too risky for my phone. Like when I went kayaking in the mangroves in St. Petersburg, with water mere inches away from the hull, and plenty of splashing going on while I paddled to capture wildlife perched on the water’s edge. A juvenile Stripe-Backed Bittern that I shot while kayaking in the mangroves of Fort De Soto Park.

Not every camera is as forgiving as the Tough when it comes to moisture, because this little waterproof puppy is equipped to capture images underwater as well – up to 50 feet, in fact. But even walking along a sandy beach photographing wildlife has other hazards, like salt-spray whipping through the air, which can be a risky adventure for cameras that are not equipped to deal with these elements. Again, the Tough needed no special treatment to protect it. If the waterproof feature isn’t impressive enough, my little Olympus Tough recently braved FRIGID temperatures at the Québec Winter Carnaval, and performed beautifully. I’m not sure if Olympus had Canadian winters it mind when they designed this camera, but it captured images and even video in temperatures when my spoiled little iPhone wouldn’t have stood a chance. (In fact, my iPhone just up and quit on me, refusing to do anything until I brought it back indoors.) To view a 15-second video I shot with the Olympus Tough TG4, click here. Performances are part of the parade at the Quebec Winter Carnaval, and my Olympus Tough TG4 captured it all, even in -25C!

No tripod or flash needed in low light With the Olympus Tough there is a ‘SCN’ setting which allows you to shoot in different lighting conditions.

Let’s face it – some places just don’t want hordes of people carrying tripods around, like the interiors of churches or museums, for example. Ditto for using a flash. This was not a problem for my little Olympus Tough. I just put it into ‘Hand Held Starlight’ mode (one of the preset options for low lighting situations), held it against a church pew, and captured this image of the inside of the Basilica of Notre-Dame de Québec. The camera shot a dozen or so exposures in rapid sequence, stacked them all in-camera, and produced this single image. Voilà! (Aren’t computers a wonderful thing?) 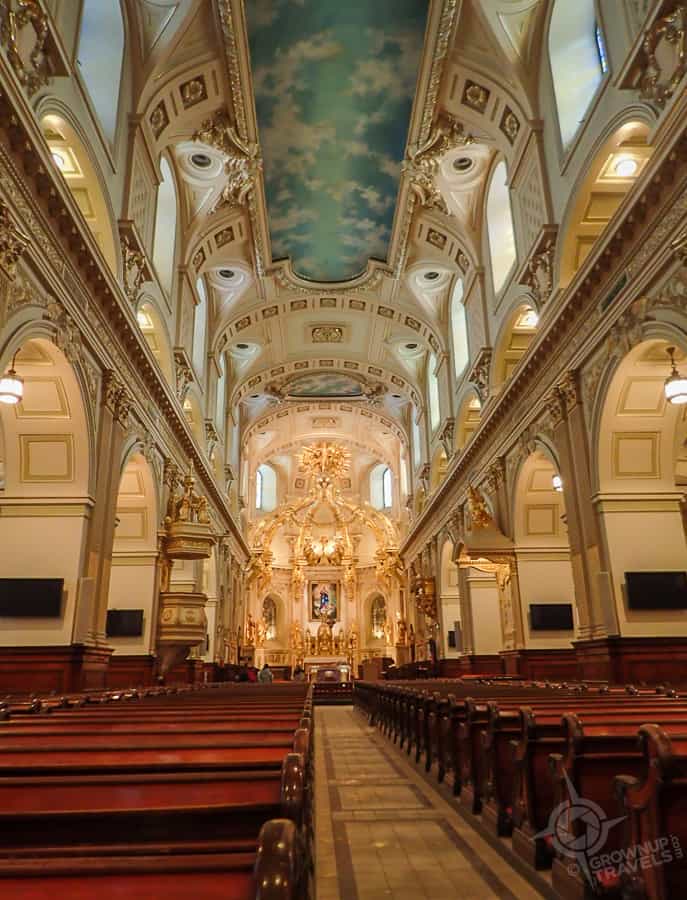 Interior of the Basilica of Notre-Dame du Québec shot without tripod or flash, and super sharp!

Okay, this is getting into techie-territory, where Henk is more comfortable, but basically this means that you can shoot photos in a format (‘RAW’) that allows WAY more flexibility for adjusting and improving the image quality. But don’t worry, it’s not a mandatory thing, just an optional setting if you are into that sort of computer/photo manipulation. For the rest of us, the Olympus Tough TG4 has an automatic mode that is as simple to point-and-shoot as any camera phone. Shooting in RAW means you can adjust images after with more flexibility. Check out this before and after.

I know it sounds ridiculous, but something as simple as a wrist strap to secure this camera means that if I’m trying to capture a photo while leaning out of a hot air balloon, I am not going to drop my camera. This is an expensive piece of equipment after all, but even at $400 or so, it’s still a fraction of what some smart phones cost, and they don’t have any way to secure them unless you want to Krazy Glue them to your hand. I know a wrist strap isn’t technical but it’s just plain smart. Besides having a practical strap, the Olympus Tough TG4 comes in a sexy red (or black)!

There are plenty of other features and technical gadgetry that the Olympus Tough TG4 offers, but I like it because it has the flexibility to take great photos in plenty of situations, or operate as a simple point-and-shoot camera. No messing with lenses, no need to decipher apertures and shutter speeds, and it even has wifi so I can upload photos through my smart phone when I want to share them.

My phone isn’t going anywhere anytime soon, but now that I’ve got my Tough, I can take this little Olympian where smart phones fear to tread!

HENK’S CAMERA REVIEW: While my Olympus Tough camera was a birthday gift, Henk actually won an even more advanced digital camera at a Toronto Travel Massive blogging event. His win was based on photos he submitted to an Instagram contest sponsored by Olympus (you’ve never seen a bigger smile on anyone’s face when Henk won!) Henk’s prize was the just-released Olympus OM-D E-M10-ii camera, and he has been experimenting with it ever since he received it a few months ago. If you are tech-savvy and into more complex equipment, you can read Henk’s much more technical review of this camera and how it performs.