Decades before Disney romanticized the world of snow and ice in its Frozen fairytale, I have childhood memories of seeing a larger-than-life snowman with a red sash and huge smile, waving at crowds of people from a glittering palace made entirely out of blocks of ice. I’m not talking about Olaf, of course, I’m talking about Québec’s ambassador for the world’s largest winter carnival, Bonhomme Carnaval.

Unfortunately, my memory comes from seeing the carnival on TV, not in real life. So I was thrilled when I finally got the opportunity to go to the Québec Winter Carnival this year, see the Ice Palace up close, and actually meet Bonhomme. Even as a grownup, Carnaval was just as much fun as I had imagined it would be as a child.

Bonhomme is THE Man at Carnaval

So much more than a ‘mascot’, Bonhomme is to Carnaval what Mickey Mouse is to Disney: a symbol of all the fun and imagination that winter can bring out in people of all ages, and like the carnival itself, a true Québec original. Every January/February for the past 62 years, this giant snowman acts as the de facto mayor of Québec City. Bonhomme’s likeness even comes on the badge or ‘effigy’ that is your ticket to everything from tours of his famous Ice Palace, to entrance to the official winter carnival grounds, to discounts at local restaurants and attractions. (These little effigies have understandably become collector’s items – you can even view all of the previous years’  effigies on display at the city’s Marie Guard Observatory.) Bonhomme Carnaval effigies from years past

But Bonhomme is more than a figurehead – he is one busy snowman, hosting brunches, showing visitors through his home, riding in parades, and posing for photos throughout the city at many of the 200 Carnaval activities and events. Coming to Carnaval and not getting a hug from Bonhomme is an opportunity missed, especially since he makes the Québec celebration unique in the world. But if you can’t get the real deal, there are statues around the city willing to pose for a selfie! The real Bonhomme and I at Le Graffiti restaurant – and a ‘poser’ at the Hilton Hotel (with a ‘BonFemme’ lookalike!)

Part of what makes Bonhomme unique is his signature red toque and colourful sash, known as la ceinture fléchée. Translated as the ‘arrowed sash’ because of the chevron patterning in its weave, these sashes were once a part of traditional 19th century French-Canadian clothing, but it is believed that the design and finger-weaving technique originated with the aboriginal tribes of the area much earlier. Made of wool, the sash was both fashionable and practical, and was worn by upper (bourgeois) and rural (habitants) classes. It was used to cinch clothing to help keep the cold out, hold gloves or tools, and even support the backs of fur traders hauling heavy loads. Nowadays, aside from being a part of Bonhomme’s costume, it is a symbol of Carnaval and its signature design appears everywhere. The very idea of a fantasy castle carved out of ice that will eventually disappear forever is something that appeals to the imagination of everyone, and was probably the reason why seeing images of it left such an impression on me as a child (and like every other fan of Frozen, I haven’t “Let It Go!” even as an adult). The Ice Palace certainly is the visual centrepiece of Carnaval, with the design changing every year, and the site itself acting as a venue for many of the carnival’s official ceremonies and events. Technically the home of Bonhomme for the duration of Carnaval, this year’s Palace included a frozen Man Cave, complete with pool table and an icy fireplace, but there was also an art gallery and displays that described the history and technique used to make the famous ceinture. Giant yarn ball in the Ice Palace at Winter Carnival

Make sure to go by the Ice Palace at night, when the site is filled with music and people, and coloured lights illuminate the palace with a spectrum of colours, adding even more magic and sparkle to the experience. The Winter Carnival’s Ice Palace is illuminated with colours that change. A few blocks from the Ice Palace is the main entrance and site of the carnival’s outdoor activities. Here’s where fun in the snow really comes to life in every imaginable activity – and some that you wouldn’t even think of….like giant ‘bowling’ where participants get inside the bowling ball and roll down a hill towards the pins. There are snow tubing runs where you can race down a snowy slope on an inflated tube, a ferris wheel and other traditional carnival rides, and even a life-sized foosball game where you can strap yourself into the game and test your soccer skills on the snow with a dozen other players.

There are snow sculptures to admire, giant marionettes on display, horse-drawn ‘sleigh-train’ rides that run a circuit around the Plains of Abraham, and lots of sweet treats to sample, including a high-octane port-like aperitif for grownups known as Caribou – definitely a Québec original. (A couple of these and you’re sure to warm up!)

Of if you prefer the more traditional winter activities to get your blood flowing, there are snowshoe and ice skate rentals so you can hit the snow and the ice with all the right gear. 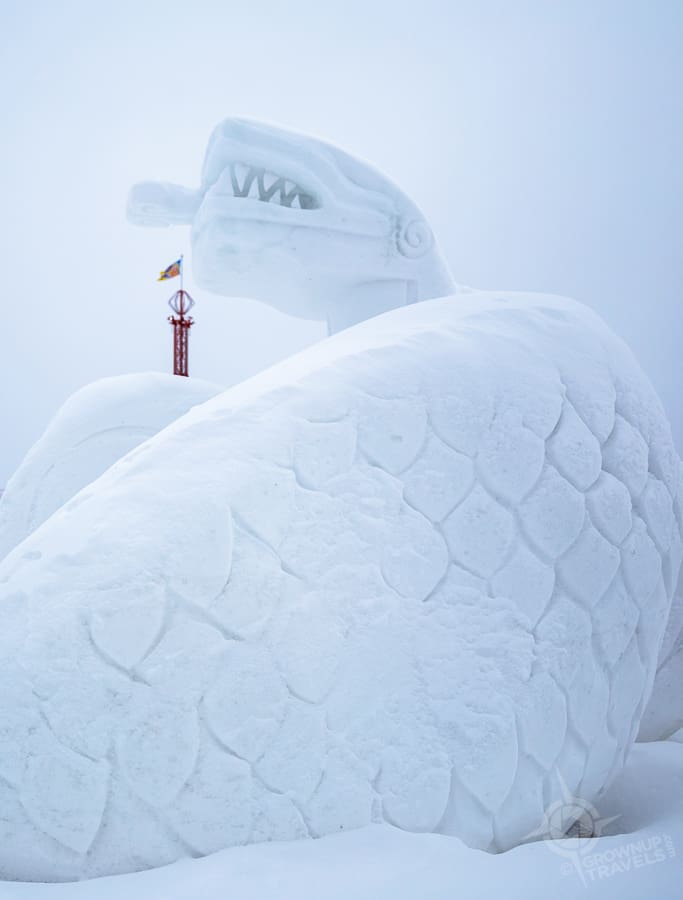 Even if you think you’ve seen enough parades in your life, don’t miss one of the Winter Carnaval night parades. With a history of creative circuses  in its blood (Québec City is the home of Cirque du Soleil after all), Québec doesn’t put on just any old parade. Bonhomme may be the host of Winter Carnaval, but it’s the Québecois and the visitors who flock here that make this global attraction a real winter party. There probably isn’t another place in Canada (or perhaps the world) that celebrates life the way the people of Québec do. It doesn’t matter where it’s music, comedy, circuses, food or film, people here will use any excuse to have a festival in any season – so celebrating les joies de l’hiver (the joys of winter) is no exception.

Never mind that the temperatures dip below zero (Celsius and occasionally Fahrenheit!) – that just keeps the snow sculptures and ice carvings from melting. Forecast calling for snow? Great! After all, what would a quarter-mile-long toboggan slide be without some snow to grease the runs? All that snow and crisp air will put some welcome colour in your cheeks, especially if you remember this advice from a local resident, “There is no bad weather; there is only bad clothing.” So bring along your Canada Goose coat (yes, you can finally justify that outrageous price tag), a good pair of winter boots made for walking (this is a great walking city), and put aside fashion for fun the way only the Québecois can and celebrate a Joyeux Carnaval!

(You might even see some celebrity visitors (like Canada’s Prime Minister, Justin Trudeau and family, who just happened to stop by to shake my and Henk’s hand!) 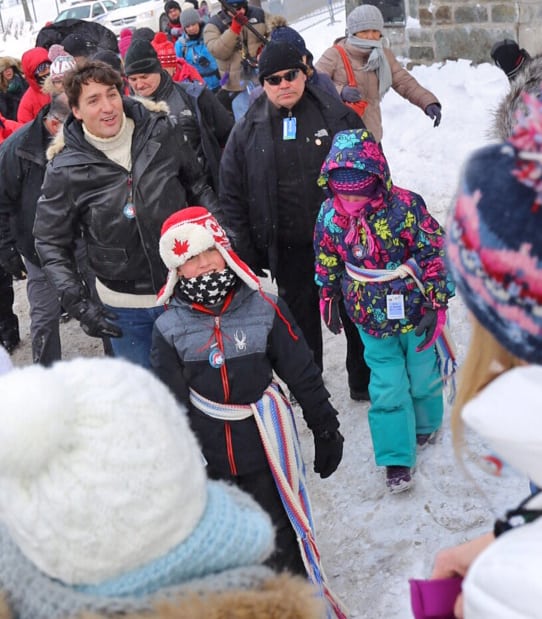 Justin Trudeau making eye contact with me in the coloured toque – Bonjour!

TIP: WHAT TO WEAR It can get REALLY cold in Québec City this time of year, so dress for winter success: a down-filled coat; synthetic layers underneath like fleece or wicking underwear (don’t wear cotton since it gets damp and cold); a warm hat that covers your ears; waterproof mitts; warm lined boots; snow/ski pants; and a scarf to pull up over your face. It ain’t pretty, but even the locals know that warmth trumps fashion (‘la mode’), as this local brand so accurately sums it up! Special thanks to City of Québec Tourism and the Carnaval de Québec for hosting my stay and providing a warm welcome at all of the activities of Carnaval! And thank you, Bonhomme, for inspiring my own fashion choices!