Years ago (and I mean YEARS ago!) when I attended Guelph University and lived in one of the on-campus housing complexes known as South Residence, I was told that our multi-tiered concrete community had been modelled after the Habitat 67 housing development built for Montreal’s World Exposition of 1967. I was always curious about Habitat 67 as a result, but it wasn’t until thirty-five years later that I finally got to see the original complex for myself, when Henk and I visited Montreal’s on the 50th anniversary of Expo 67.

The idea for Habitat 67 came to life during a period of futuristic optimism in Montreal, with the city celebrating other modern achievements like its brand new metro system and soaring skyscrapers, and plans were well underway to host Expo 67. So it wasn’t such a stretch of the imagination that a then-unproven 25 year-old architect named Moshe Safdie was granted permission and government funds to construct his radical re-imagining of the traditional apartment building. Safdie’s vision was to use cast concrete modular units that could be assembled into not just an architectural complex of efficient living spaces, but an actual neighbourhood where every home had a garden and the residents would be connected physically and socially to one another. It would be the perfect hybrid of urban amenities and suburban access to outdoor space and light. 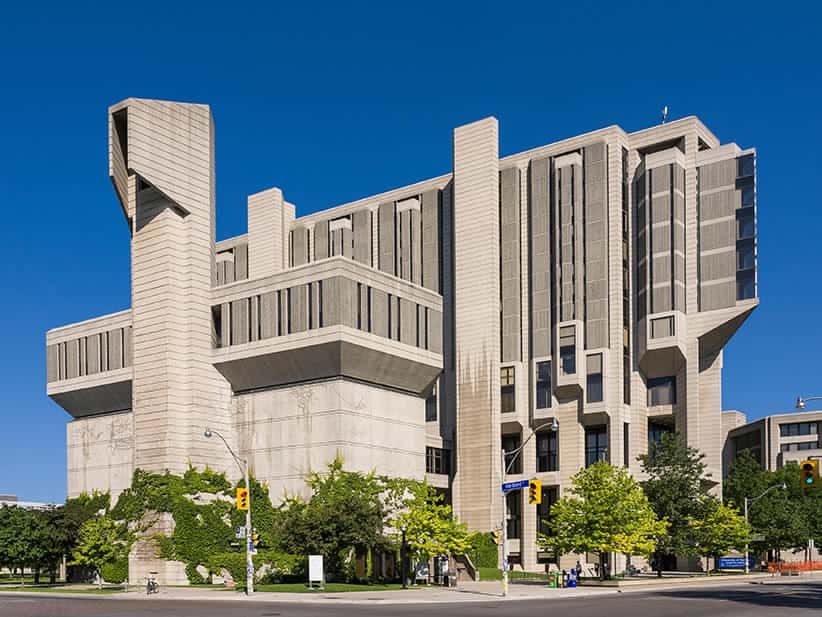 University of Toronto’s Robarts Library – a Brutalist ‘peacock’ in more ways than one *Photo Macleans.ca

There are probably more Brutalism critics than fans of the style, and its fans are more likely modern ones, as time has provided the perspective needed to appreciate the modernity and ‘honesty’ of this type of design. Certainly when the first Brutalist buildings began appearing in the late 1950s to the 70s, most people viewed them as “concrete monstrosities” giving another negative interpretation to the term ‘brutalist’.

Reinforced cast concrete was the principle building material at Habitat 67 As intrigued as I was by Habitat 67, and curious to see what these cubes looked like today both from the inside and the outside, it didn’t look like this was going to happen on the weekend that Henk and I were visiting Montreal. I soon learned that Habitat 67 is all privately-owned condominiums now, and although not quite a gated community, visitors are not permitted to wander the complex. There is a public tour that can be booked, but Henk and I were out of luck as the tour wasn’t available on weekends.

Undeterred by my lack of foresight or planning, I decided that I had to see the complex regardless, so we hopped in an Uber and made our way to the man-made peninsula opposite Montreal’s Port, taking our chances that no one would notice our presence.

Henk and I weren’t on the grounds of Habitat 67 more than 15 minutes when we were spotted on a security camera by a guard stationed in one of the lobbies. (This should be of great comfort to the residents, by the way.) “Uh-oh”, I said to Henk, “I think we’re busted.” Sure enough, the security guard came up to us and told us we weren’t allowed to be there as this was private property. Genuinely apologetic, albeit guilty, I did what I usually do in these kind of situations and started talking – talking about my days at the University of Guelph, the architectural interest I had in the building and Safdie, our bad timing re: the tours, etc. etc. blah blah blah.

Next thing I knew, our security guard was calling one of the long-time residents of the complex, who not only came to meet us, but after hearing about our interest in the complex, offered to take us on an impromptu tour of the buildings. Yep, I had talked my way into a private tour of Habitat 67!

Accompanied by our enthusiastic and well-informed resident/guide (whom I will call ‘Raymond’ so as not to get him into any trouble!), Henk and I began to get a deeper appreciation for the design of Habitat 67.

From an engineering standpoint, the complex is definitely a beast: 354 concrete cubes are precisely balanced, stacked and cantilevered over one another so that they look suspended in space. All of them are reinforced with a steel skeleton, and the modules on the lower levels are made of thicker concrete than those on the upper tiers. Connected by covered walkways whose heated floors keep them free of ice in the winter months, individual homes are made up of at least one of these 600-square foot ‘modules’, with some as large as 7 units, spanning 4200 square feet over several floors. And of course, true to Safdie’s vision, there are terraces and gardens for every unit, many with unbeatable views of Montreal. Hows this for a terrace with a view of Montreal? (even on a grey day) There is definitely beauty here in both the creativity of the design and the structural ingenuity of its working parts: even a modern take on a downspout is part fountain, part function.

Our tour was an unexpected treat, but the real bonus came when ‘Raymond’ wanted to show us one of the homes that are usually open for public tours: he quickly realized that the set of keys the security guard had given him were for Moshe Safdie’s PERSONAL apartment instead, which was currently undergoing a complete restoration.

Now officially breaking ALL of the rules, Raymond ushered us into the suite/construction site, and allowed us to clamber over exposed floor joists and up staircases, exploring the 2-level penthouse Safdie himself had actually lived in. Plans are for the home to serve as a museum of sorts, with 1960s decor and all the original fittings, including the kitchen cabinets and appliances designed by Safdie. There are even several of his one-piece molded fibreglass bathroom units still in the suite, a concept that was decades ahead of its time.

Whether you love or hate the aesthetic of Habitat 67, there’s no denying its place in the architectural history books, and with the insight we gathered from Raymond, Henk and I were able to appreciate more of its design from the perspective of someone who has lived here for decades. Still a prestigious address, Habitat 67 condos come up for sale rarely, and are both expensive and chic (based on my browsing of recent real estate listings). But there’s definitely a sense that this is a community more than just a collection of cubes. So perhaps Moshe Safdie’s experiment has been a success in many regards after all. Photo from a Habitat 67 condo listing by DuProprio Realty

As Henk and I thanked Raymond for his impromptu tour and left Habitat 67 on the complex’s private shuttle to downtown Montreal (there are perks to being the guests of a resident!), one of Raymond’s anecdotes that I particularly liked stuck in my mind: he told us how in recent years when Moshe Safdie has come back to visit Habitat 67, the elderly architect has been seen walking around the complex looking up at the buildings with the same look of amazement that many visitors do.

Perhaps even Safdie can’t believe that he launched his career with a building as radical and risky as Habitat 67.

TIP: I don’t recommend you go rogue like Henk and I did by visiting Moshe Safdie’s Habitat 67 without permission, as this is private property and you will likely be sent packing. To be on the safe side, contact Habitat 67 about organized tours.