It is the crown jewel on a piece of prestigious real estate named after another jewel – Cap Diamant (the ‘diamond cape’) – and its unmistakable turrets with their verdigris copper roofs have made it one of the most photographed hotels in the world. This is Québec City’s Fairmont Le Château Frontenac, one of Canada’s most historic and elegant grand railway hotels, and as close to a castle as you can get in this 400-year-old city (or anywhere in Canada, for that matter!) So with Canada marking its 150th birthday, it seemed like the perfect excuse for Henk and I to check in and check out Le Château Frontenac, stop #3 on our Château-Hopping Tour of 2017!

History of the Château Château Frontenac before and after the Tower was added

This tower differentiates the hotel from its similarly-turreted predecesor, the Banff Springs Hotel (after which the Château was modelled), and has since become part of Québec City’s internationally-recognized skyline.

Fairmont Banff Springs Hotel is the 2nd oldest of the CP Rail hotels. The Frontenac is the third oldest. *Photo courtesy of website

As a side note, the original roof of the Château was recently replaced, but some of these historic copper plates have been reimagined and repurposed by talented artists whose work is on display in the hotel. I was also delighted to find a piece of the hotel’s original roof waiting for me in my room as a memento of my visit! My memento as a guest of the Fairmont Le Château Frontenac: a piece of their roof!

While the Château Frontenac may not date back to the founding of Québec City, other structures that once stood here do, including the Saint-Louis Forts from the 1600s and the Château Haldimand from 1784, which served as the residence of the British Governor General and his family. 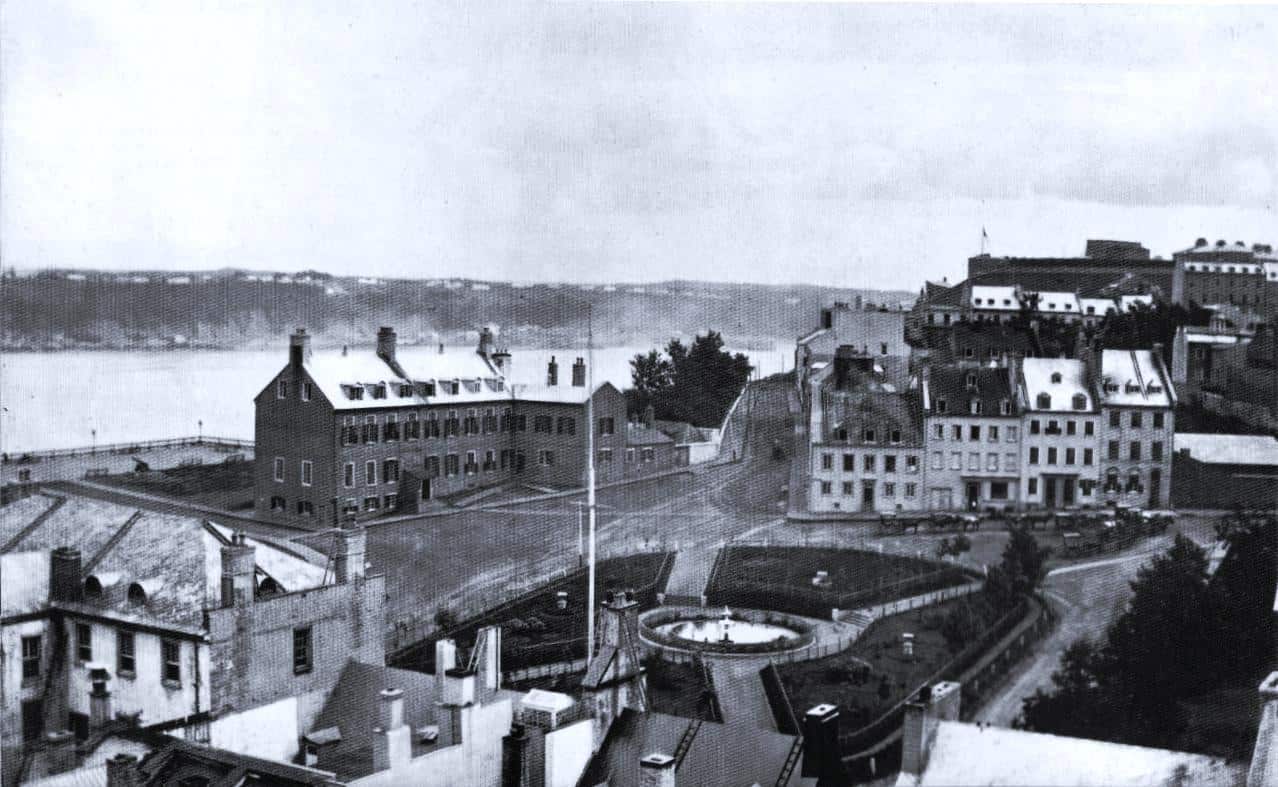 Château Haldimand is the building on the left in this 1866 image.

The archaeological remains of these buildings are located right in front of the Château overlooking the St. Lawrence River, and have been recognized as a National Historic Site and turned into a visitor attraction. You enter this ‘underground museum’ by way of a stairway right in front of the Château that takes you below the Dufferin Terrace to a series of rooms and stone foundations. It is worth exploring as it gives you a glimpse into the daily life of the upper class residents who lived here in the 1700s. Among the artefacts found on the site are pieces of china and serving ware (some of which have survived intact), and you can see the location of a cleverly-constructed ‘refrigerated storeroom’ that used ice taken from the St. Lawrence River to keep foodstuffs fresh. A cold storeroom was constructed by storing blocks of ice from the St. Lawrence River in a chamber below

TIP: You can get into the ‘ruins’ below Chateau Frontenac for free until the end of 2017 if you use your free-to-order Discover Parks Canada Pass. The Frontenac’s main entrance is off Place d’Armes

Québec City has the distinction of being a UNESCO World Heritage site as the only walled city in North America, and Château Frontenac with its tower stands like a sentinel in the centre of this historic district within ‘walls’ of its own: the hotel’s main entrance is located inside a central courtyard enclosed by the wings of the hotel, which adds to the feeling of being inside a medieval castle. (except for the luxury SUVs parked here of course!) If it wasn’t for the polished brass revolving doors at the entrance and the presence of elevators, you might actually believe the hotel was built 400 years ago. Elevators give away the fact that the Château is not medieval.

Host to the Rich and Famous

The Château Frontenac has hosted its fair share of celebrities and royals over the years, including Princess Grace and Prince Rainier of Monaco (who seem to have a fondness for Château-hopping as well, as they have also stayed at Château Montebello). Stars like Sting, Angelina Jolie and Céline Dion have stayed here, and Sir Paul McCartney brought his whole retinue when he gave a performance on the Plains of Abraham. So if celeb-spotting is your thing, or you want bragging rights to say that you’ve shared the same air as those folks, the Frontenac is definitely where you’ll want to stay.

The good thing is that regardless of how famous you are or aren’t, the Fairmont staff will treat everyone as a special guest. And while my Deluxe River View Room was not huge, the luxurious linens and the view out over the Terrace to the river made me feel as pampered as any princess. (of course if you are a Fairmont Gold member, there are many more perks waiting for you like a private lounge, complimentary breakfast, snacks and more!) As a modern-day base for exploring Québec City, the Château Frontenac couldn’t be better positioned: its picturesque location anchors the graceful Dufferin Terrace promenade, where you can stroll and admire the views over the St. Lawrence; a few feet away is the Place d’Armes with historic inns, restaurants and a handy Tourism Information Office; and fifty feet from the hotel is the funicular which takes you down to the Petit Champlain Quarter with its cobbled streets filled with boutiques and restaurants. Petit Champlain Quarter is at the base of the Château Frontenac Shopping for a pelt, anyone? You can find it in the Petit Champlain Quarter.

Whatever you want to do in Québec City (and there’s a lot TO do!), the Château Frontenac makes a luxurious starting – and ending point – for your visit. After all, if you’re going to visit one of North America’s most historic cities, where else would you want to stay but in one of Canada’s most famous castle hotels?

RESTAURANT TIP: Think ‘outside the walls’ when it comes to dining out in Québec City: you’ll discover places where locals like to eat and drink, not just tourists. Try Les Salons d’Edgar for a funky, boho-chic atmosphere that’s perfect for a casual drink or meal. Or dial it up a gastronomic notch at La Gueule de Bois just a few doors down, where you can enjoy sweetbread gnocchi and veal carpaccio in a similar loft-like atmosphere.

If you love reading about Canada’s historic hotels, check out Stop #1 (Château Laurier) and Stop #2 (Château Montebello) on our Château-Hopping Tour of 2017.