Why do we always seek to go off the beaten path? There is a game in the boardrooms of ad agencies called Buzzword Bingo, in which meeting attendees count the number of times that clichéd business terms are tossed out in a meeting. Words like ‘synergy’, and ‘offline’, and ‘media agnostic’.

In the world of travel we have our own expressions: ‘off the beaten path’ being the worst offender. Which got me to thinking:

Why are travellers more and more obsessed with off-the-beaten-path travel?

Is it because we want to avoid the crowds, and not be lumped in with a thousand other ‘tourists’?

Or is it that we hope to find places where Justin Beiber means nothing, thankfully, and where we can escape the influences of our own culture that are unfortunately becoming the influences of the entire world?

For me, it is both, and I would add in a third: there are times when I actually LOVE feeling like a foreigner! Here’s why. My husband and I had just hiked to Machu Picchu on the Inca Trail, and were exploring the ruins of the fabled city, me poking around on one particular part of the site, while he was off photographing something else. Before long a local group of 12 and 13 year-olds joined me on the plateau for what must have been a school field trip of some kind. I became a stop on the local school field trip.

Apparently, being a tall blonde foreigner in a country of shorter dark haired people was even more interesting than the 500 year old set of ruins, because before long a young boy asked me if he could take my picture! I was a little surprised, but said of course, and no sooner had he taken a photo of me, than he was joined by his friend, and within moments, half of the class were gathered around me, taking photos and asking questions. I did my best with my limited Spanish to ask them their names and ages, and was as delighted as they were with the ‘conversation’. I was loving being so foreign that the curiosity of these kids had drawn them to me! And my husband, returning to where I was, caught the encounter in his camera. 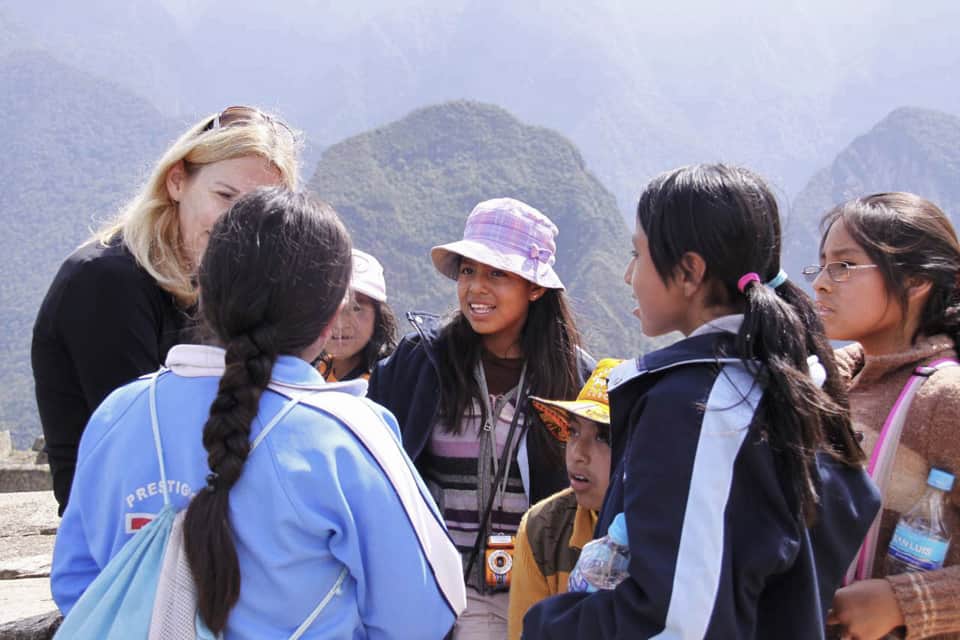 Conversation was limited, but that didn’t stop us from trying!

This, I think, is why being a ‘stranger in a strange land’ can be so rewarding: taking the less travelled road indulges our innocent, human curiosity, and encourages our Inner Explorer to search for the truly unique, the extremely different, the most foreign of foreign destinations – where we ourselves become the ‘curiosity’ to the people who live there.

It is this 360 degree perspective that makes us look a little differently at our own world, and not just the differences, but the similarities we all share. And isn’t that the idea of travel in the first place?