Two thousand year-old Roman ruins, a chapel decorated with over 5,000 bodies’ worth of bones, and the chance to wander around on the top of a medieval cathedral/castle: these were just 3 of the reasons why we put Évora on our Portuguese itinerary, and why this small town is a UNESCO World Heritage Site.

Nestled in the heart of the Alentejo region of Portugal, and with historic significance that dates back to Roman times, Évora may be the capital city of the region, but it is still a small town at heart. And that’s what makes it such a delight to visit. Evora is the capital of the Alentejo region, known as the rural heart of Portugal

First off, the walled city is charming and easily walkable, with narrow cobbled streets running alongside 400 year-old aqueducts, (some of which have shops and homes built beneath and between the arches). 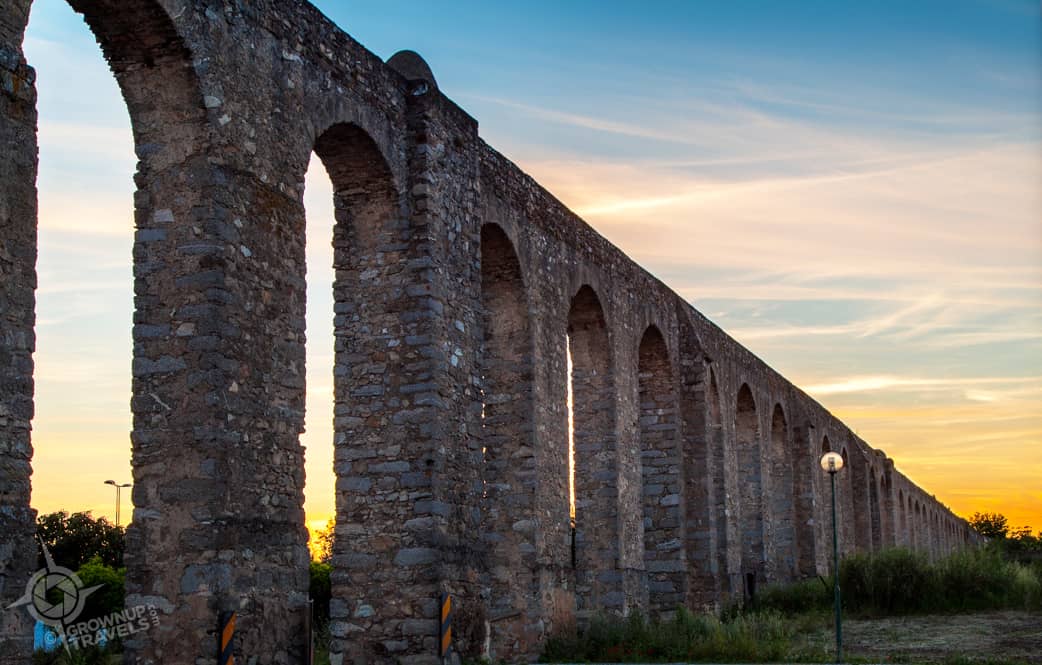 There are plenty of hidden nooks and crannies where you can sample Alentejo specialties, stop for a leisurely drink, or shop for locally-made cork products. A good place to sit and admire some of the pretty 16th century buildings and churches is in the pedestrian-friendly Praca do Giraldo, the historic centre where all roads in town lead. It’s hard to imagine that this peaceful place was once a seat for the Spanish Inquisition, and the site where King John II executed his brother-in-law, the Duke of Braganza, in 1484. The Roman Temple of Évora The Roman Temple in the heart of Evora is impressive and imposing, despite its age and condition.

The place that holds the most magic for me in Évora is the central square on the highest point in town where the remains of a Roman temple take centre stage.

Dating back to the 1st century AD, this temple has managed to withstand invasions, earthquakes and even over-zealous urban planners who modified and repurposed it over the centuries (it functioned as a temple, defense tower, and even a butcher shop for almost 500 years until 1836). In the late 1800s, the medieval add-ons were finally removed, and what remained of the original Roman temple was restored to what you see today. Surrounded by other historic buildings, an elegantly restored monastery that is now an exclusive pousada, and a pretty public garden, this square is a great place to take in the view over Évora below, enjoy a drink at the small outdoor café in front of the temple, or even take a romantic stroll after dark when the temple is illuminated and the square is all yours to enjoy. By night the Temple is even more evocative The Cathedral tower seen through the Roman Temple, by day and by night This chapel contains the bones of 5000 souls. Set up to inspire contemplation of the transitory nature of life.

Speaking of ancient remains, Évora boasts one of the more unusual (read: creepy) chapels I’ve ever visited: the Capela dos Ossos, or chapel of bones, adjacent to the Church of São Francisco. 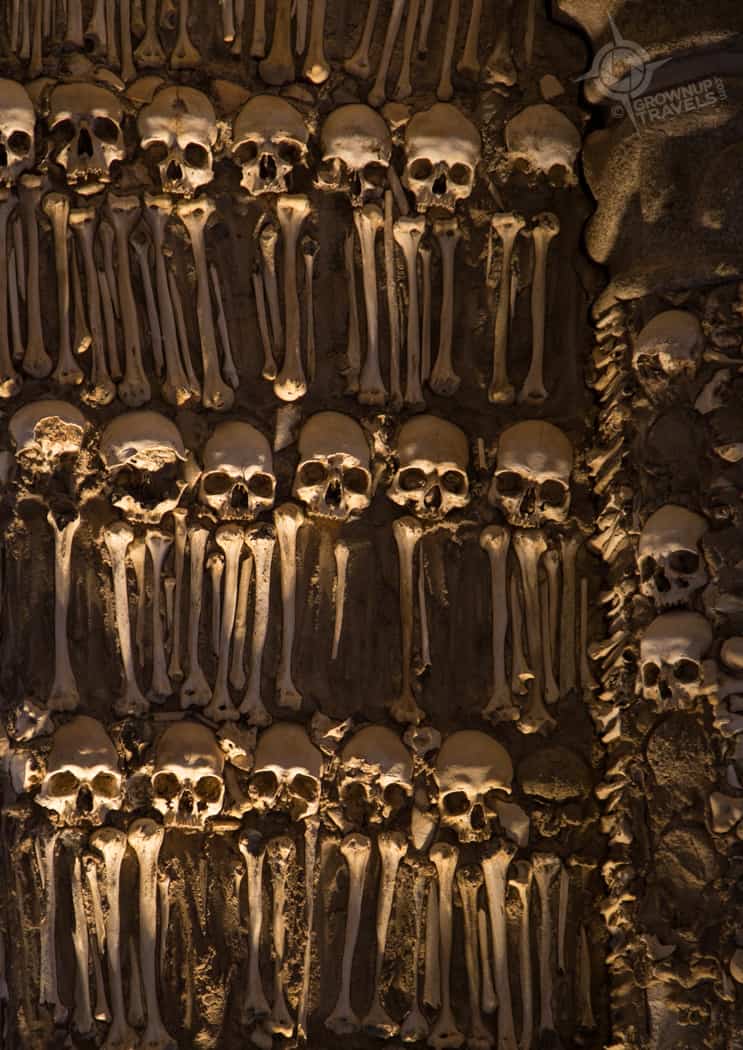 The bones of 5,000 bodies are on display, used as decorative details on columns, arches and walls.

The story here is that by the 16th century, there were over 40 cemeteries near Évora taking up some pretty prime real estate, so the monks at the church of São Francisco decided to relocate the bones of the buried to free up that land. The monks also thought it was an opportunity to send a humbling message to the wealthy upper crust, by putting the bones on display as a tangible reminder of the transient nature of our existence on earth. The ceiling’s ‘borders’ framing the frescoes are actually skulls

Inspired by an Italian chapel of similar design, (San Bernadino alla Ossa in Milan) the Capela dos Ossos in Évora contains the bones of an estimated 5,000 bodies, all of which are arranged artistically on the walls, ceiling, and pillars in the sixty-foot long room. The Bone Chapel adjacent to the church of Sao Francisco This mummified body has been removed from the chapel and is currently being tested and preserved. (This is an archive photo)

Even creepier are 2 mummified bodies – an adult male and a child– that were hung in the chapel some time in the 17th century by no-one-knows-who, and are rumoured to have been cursed by a wronged wife/mother. (the mummies have been recently removed for preservation and DNA testing that might eventually shed some light on if they are in fact related to one another.)

Whether you find the chapel fascinating or frightening, the message the original monks wanted to send 500 years ago is still relevant today, and visible in the inscription over the chapel’s entrance which translates to: “We bones are here, waiting for yours.” A sober reminder that life here is fleeting… The Sé Cathedral in Évora, the largest in Portugal

When do you get the chance to climb up to the rooftop of a medieval cathedral/castle and wander around its turrets and towers while enjoying a 360-degree view of the surrounding countryside?! Visit Évora’s Cathedral de Sé, and you’ll be able to do just that.

The Cathedral and Cloister

This cathedral itself is the largest in Portugal, with an imposing, sturdy-looking exterior reflecting the Romanesque additions to its original Gothic design. But once inside, the soaring gothic vaults of the interior and the arched loggia surrounding the serene cloister give a much more inspiring sense of the church’s space and grandeur, and it is clear that this is meant to be a place of worship as much as it was a defensible structure. While you won’t need to spend a lot of time in the church itself, don’t miss one of the more unique statues you’ll find here: a rare representation of a heavily pregnant Virgin Mary, one of few that survived after a conservative 15th century Pope ordered them all destroyed. A Statue of the virgin Mary showing her pregnant. Most were destroyed as inappropriate representations.

It is after you climb the tower’s narrow spiral staircase and emerge onto the cathedral’s roof, that you get to a vantage point that will take your breath away. (And I challenge you not to feel like a kid as you explore the stone terraces and ramparts on the massive roof!) These roof lookouts are more than just functional platforms with spectacular panoramic views of the city and countryside: the terraces are decorated with elegant architectural details and ornaments that make them beautiful in their own right. This is also the only place where you can get this close to the cathedral’s two asymmetrical towers to admire their design and tilework, or get a birds-eye-view of the cloister below. View of the Cloister from the roof of the Evora Cathedral

With so much to see, it’s easy to spend an hour just wandering on the roof of the Cathedral, so get to the church early enough before it closes so that you won’t be rushed. (Hours are from 9am – noon and 2-4 pm) Cathedral tower details framed in the balustrade terraces on the roof.

If you are going to visit the Alentejo region of Portugal, Évora is a place you won’t want to miss: although it draws plenty of tourists to visit its historic attractions, the pace here remains relaxed – and with the friendly locals extending a warm welcome to visitors, you’ll be feeling at home in Évora in no time.

TIP: Évora is about 1 ½ – 2 hours from Lisbon by car and train respectively, and many people make it a day-trip destination, but if you want to keep from feeling rushed, an overnight stay would be a more relaxed way to experience the city. If you do drive, note that parking is restricted within the walled historic centre of Évora, especially overnight, so it’s best to leave your car just outside the walls in one of the large free parking lots. (just take the normal precautions of removing your belongings.)