3 of Porto’s Most Beautiful Treasures So much Porto, so little time.

There’s a saying in Portugal that goes like this: “Porto works, Braga Prays, Coimbra studies, and Lisbon gets the money”. But don’t think that this means Porto is just an unattractive workhorse of a town: beauty is everywhere here, not just in the city’s geographic location at the mouth of the pretty Douro River, and in its architecture, particularly some of its early 20th century buildings. Here are 3 of Porto’s most beautiful places that I think that no visitor should miss.

“The Most Beautiful Train Station in Europe” 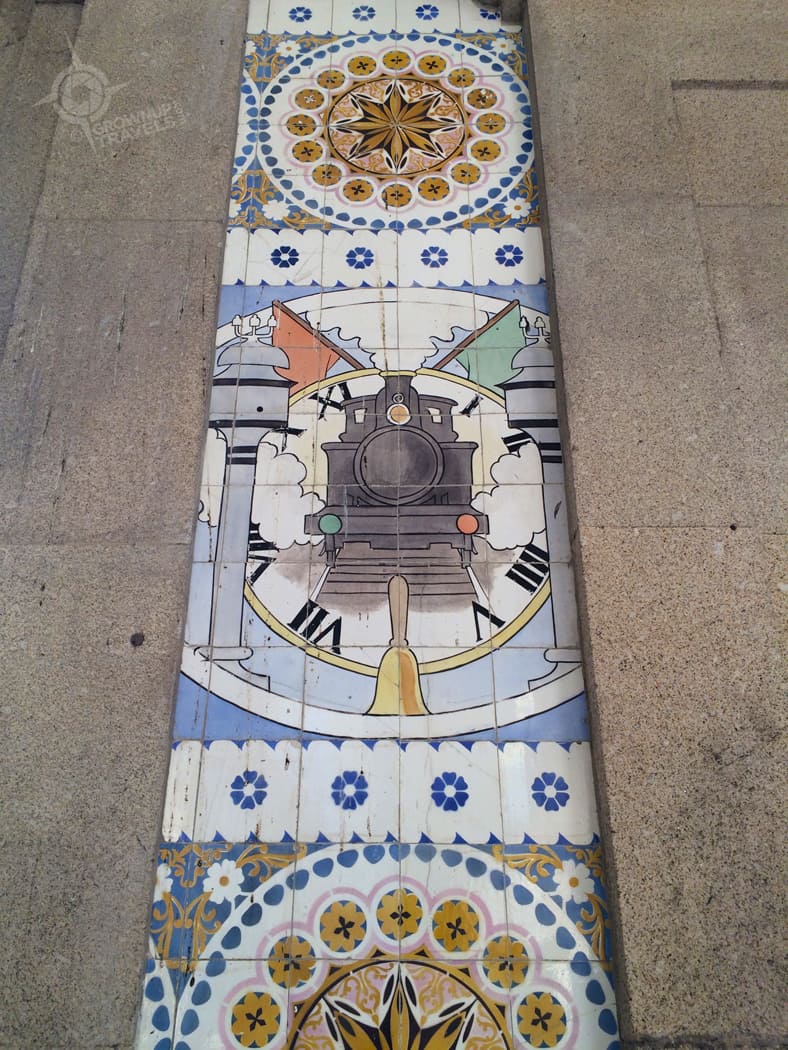 That was how the Sao Bento Train Station was described to us when we asked what were some must-see attractions in Porto, and after seeing it for ourselves, it’s hard to argue with this claim. Built at the turn of the last century, Sao Bento took 16 years to complete, partly due to the work that went into its interior decor. And when you see it you’ll understand why.

In the main entrance hall surrounding enormous floor-to-ceiling stained glass windows, over 20,000 traditional azulejos (Portuguese tiles) decorate almost every surface. Train-themed vertical tiled ‘banners’ fill the space between the windows, huge blue and white murals fill the wall opposite the windows and on either end, and a colourful frieze runs along the perimeter just below the detailed plaster ceiling. Painted by Jorge Colaco, the most renowned tile painter of the day, the scenes depict historical battles, everyday life in Porto, and significant events from Henry the Navigator’s life. Even after 100 years, the colours on the tiles are as vibrant as the events they illustrate, and with the sun streaming in through the huge windows of the western facade and illuminating the artwork, this hall feels more like a museum atrium than a commuter station. Yet, Sao Bento is still very much in use as the transportation hub it was built to be, and there’s something both nostalgic and exciting about seeing people coming and going through the train station’s entrance, arriving or departing on their own adventures. And with the station looking the same as it must have a century ago, it’s easy to imagine that bygone era when train travel was the most elegant and romantic way to travel.

The Most Beautiful Bookstore I’ve Ever Seen

And speaking of imagination, the Livraria Lello & Irmao Bookstore in downtown Porto is hands-down the most ornate and creative interior for a bookstore that I’ve ever seen. The enchanting interior of the Livraria Lello in Porto

When they opened their bookstore in 1906, owner-brothers Antonio and Jose Lello and their engineer designer Xavier Esteves hoped that the space they had created would foster intellectual thought and creative inspiration. So they brought this vision to life in the design of the Library itself.

It’s hard not to be enchanted when you enter the bookstore and the first thing you see is the Lello’s incredible organic staircase with its elaborate carvings, winding stairs and what appears to be a floating, ballustraded bridge spanning the two-story atrium. The balcony appears to be floating. (Notice the tracks on the floor to the left for a book ‘wagon’ to roll along.)

The staircase is deceiving in other ways beyond its gravity-defying construction: although it appears to be made of carved wood, it is actually made of reinforced concrete (the first time this technique was introduced in Portugal), which was covered in carved plaster and painted to look like wood. The same technique was used on the ceiling above, and it is this balance of ornamentation and innovative engineering that is part of the magic of the Lello’s interior design. What appears to be wood is actually carved plaster covering concrete

Rumour has it that it was this kind of creative thinking and ‘magical’ aesthetic that inspired JK Rowling to write her own Harry Potter books. (Rowling did live in Porto and was a frequent visitor to the library but she has never confirmed or denied the claim.) Regardless of whether it is true or not, the JK Rowling connection attracts even more visitors to the Livraria Lello to admire its Neo-Gothic decor (up to 3000 people a day come here in high season). It has become so busy, in fact, that the bookstore now charges a 3-euro admission fee to help manage traffic and offset curious visitors who only come here to see and not to buy. Since the vision is to keep the Lello as a functioning bookstore and not a museum, this admission fee is a smart way to earn revenue so that the store can purchase more rare and diverse books to add to their 120,000 book inventory, and help cover the maintenance of the building. (And if you do buy a book, the fee goes towards your purchase.)

While admiring some of the books, I struck up a conversation with Rui, a passionate employee who remembers coming here as a child and being left for hours to read while his brother was at classes in the nearby university. His grandfather also worked here, so the passion has been handed down through the generations and Rui’s love for the bookstore and what it represents was a delight to hear.

Everything here from the floor-to-ceiling bookcases, to the ‘wagon track’ that was originally used to shuttle freshly-printed books from one end of the store to the other, has history, meaning or purpose. Like its motto in the stained glass skylight above the Lello Livraria proves that “Decus in Labore” (There is honor in work) or work of art, in the case of this store. (This is a replica of the actual skylight which was being restored at the time of our visit.) Our last stop before leaving Porto was at another storied location dating back to the Belle Epoque – the aptly-named Cafe Majestic on Santa Catarina Street. Opened in 1921 to much praise, but under the name “Elite”, the cafe soon became a favourite destination for the well-heeled patrons who frequented this pedestrian shopping street. But ‘Elite’ carried with it a hint of the monarchy at a time when the people of Portugal were exploring a more republican future, so the name was changed to Cafe Majestic instead to appeal to these left-leaning intellectuals.

Designed in the Art Nouveau style of the times, architect Jose Queiroz layered on the embellishments inside, with carved plaster ceilings, curved window frames, elaborate bevelled mirrors and embossed leather banquettes and chairs. 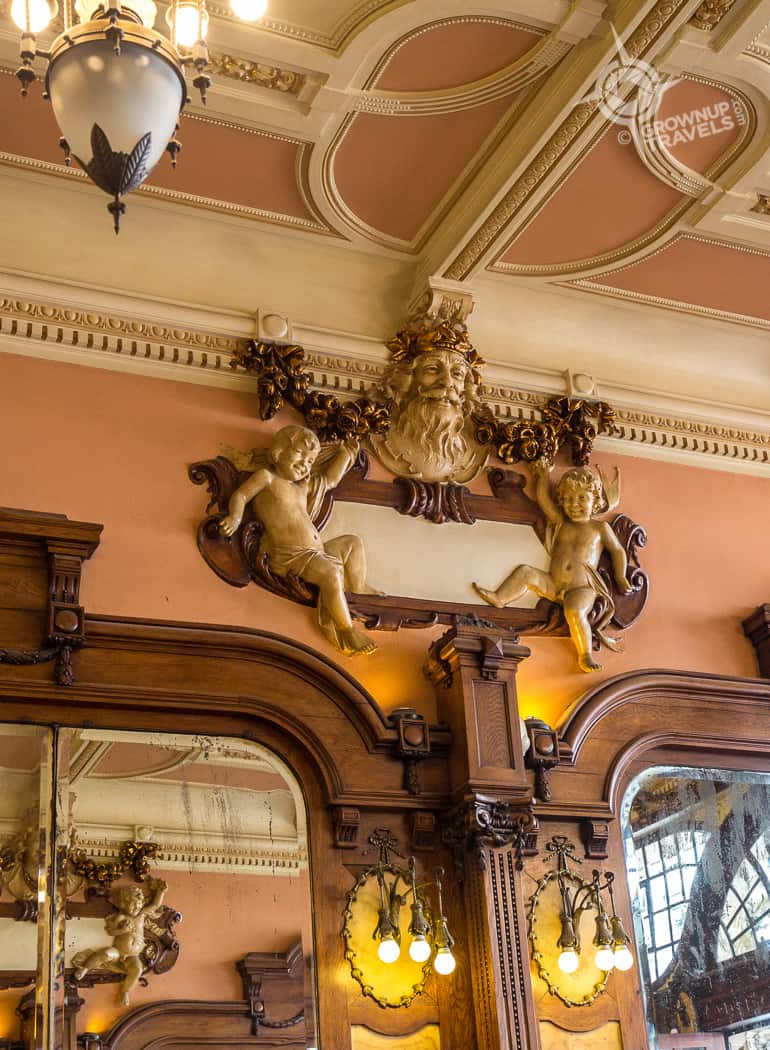 Outside, an equally gracious facade invited passersby to come in and indulge in Afternoon Tea, a popular Portuguese institution, or perhaps a glass of absinthe like in the popular Parisian cafes after which the Majestic was modelled. Today there is no absinthe, but plenty of visitors and locals come here to indulge in other decadent treats (after all, you can never have too many pasteis de nata when you’re in Portugal!) What’s a few more calories when the cafe is this pretty?

Visitors to the Cafe Majestic have the city of Porto to thank, because it was the local government who recognized the significance of the cafe and rescued it after decades of neglect. Painstakingly restored over 2 years from 1992-1994, the Cafe Majestic is once again the stylish destination it once was. And yes, it’s a little pricey, but if that is the cost of bringing an historic landmark like Cafe Majestic back to its former glory, I don’t mind paying a Euro or two more to enjoy this kind of eye candy.

Even with a mere day and a half to spend exploring only a few of its highlights, Henk and I found Porto to be a city full of delightful surprises. Ironically, we were so busy seeing all these other beautiful treasures that we didn’t even have time to sample one glass of port, the fortified wine that the city is known for! (Fortunately, we remedied this while visiting the Douro Valley in the days that followed.)

TIP: Tickets for the Livraria Lello bookstore can be purchased just opposite the store at a kiosk which opens at 10am every day, 11am on Sundays. (Map is here) You can also buy your ticket in advance and go directly to the store when it opens in order to avoid the worst of the crowds.
Note: we visited in May 2016 and the facade of the building was under scaffolding and the stained glass skylight was also being restored with a replica in its place instead.