The initiation Well at Quinta da Regaleira in Sintra

It’s rare that the same thing that makes me exclaim “I HAVE to see this for myself!” inspires Henk to say the same thing. But that’s what happened when we both saw photos of the Quinta da Regaleira ‘Initiation Well’ in Sintra, Portugal. What was even more surprising is that we were both so impressed with this marvel and the estate where it is located that we visited it twice in the same trip. Here’s why.

Anytime I hear about any place that is linked to – or is rumoured to be linked to – the Templar Knights, the Masons, or anything else in the realm of Christian mythology, I’m in. Not because I’m particularly Christian, but because I love a good mystery, especially one that involves quests. And in many ways, a quest is what Quinta da Regaleira is all about. But although there are only a few rumours and architectural references relating to the Templars, and none that suggest there is a holy grail on this property, there IS a quest that visitors to these gardens embark upon (more on this later). But first, the palace!

Fussy, fantasy architecture with plenty of squiggles and swirls

I’m no minimalist, I’ve discovered. The more embellishment and decoration there is on a building, the more I seem to like it. And the palace at Quinta da Regaleira delivers all of that and more. Even though it is not the most historic palace in Sintra, (where you can’t throw a stone without hitting a King’s residence of one sort or another), it is one of the most visually elaborate. Built in the late 19th and early 20th centuries by Antonio Augusto de Carvalho Monteiro, a wealthy ‘Brazilian-aire’, Quinta da Regaleira was an expression of the owner’s own love for Romantic gardens and neo-manueline architecture. His Italian architect, Luigi Manini, was equally mad for both, and it shows in both the palace and the grounds of this 10- acre estate that he designed. Carved wooden ceilings in the palace, designed by Manini

Known for his set designs at La Scala in Milan where he worked, Manini poured the same kind of operatic drama into both the palace and the chapel that are built on the estate. Decorative arches, swirls, pillared windows, ornate columns, gargoyles and turrets are everywhere, as are stained glass, inlaid wood ceilings and mosaic floors. Vibrant, detailed mosaics depicting the hunt in the palace at Quinta da Regaleira

Here and in the little chapel not far from the main house, there’s no such thing as ‘too much’. It is on the grounds and elaborate gardens of the estate where the real magic of Quinta da Regaleira lies. A true Romantic garden, the design of these pathways and structures and the symbols and ornaments found within it, are all part of an allegorical journey that each visitor experiences in their quest to ‘know thyself’. Romantic structures are found throughout the gardens.

At the centre of this quest is the spectacular ‘Initiation Well’, a ‘subterranean tower’ that sinks over 100 feet into the ground, and acts as a vertical “bridge” between the depths of the earth and Heaven above. Visitors descend the 9 levels of the well on a spiral staircase that takes you on a symbolic journey deep into your inner self, where only by exploring your darkest truths can you be redeemed into the light, mirroring other literary references like the ones you’ll find in Dante’s Inferno, which had 9 levels of Hell. Standing at the centre of this incredible vertical passageway, even with other visitors around, you do feel a sense of isolation from the world so far above the moss-covered stairway. 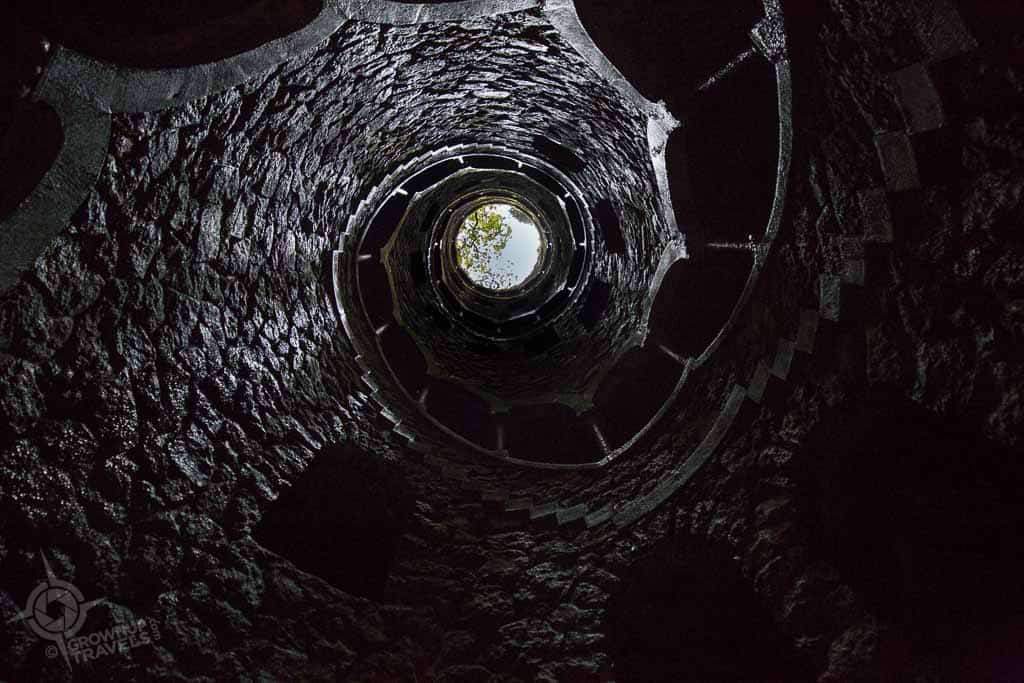 Like the journey of self-discovery represented by the Initiation Well, the way out of the depths is through darkness, via labyrinthian tunnels that lead you past lagoons and waterfalls before you can emerge into the light. And the exit path where you must cross over water is reminiscent of other mythologies where only by crossing rivers are individuals redeemed (the river Styx in Greek Mythology, for example.) Walking on water is part of the journey into light.

Allegorical quests aside, Henk and I both agreed this was one of the coolest places we’ve ever been. But the Initiation Well was only one of many other incredible features here which must have cost an absolute fortune to construct. There are other grottos, other labyrinths, (even another unfinished initiation well), as well as quiet places to just sit and enjoy the beautiful greenery and fountains. And for the kid in each of us there are castle-like structures and turreted towers to explore. (Don’t miss climbing the Regaleira Tower for a view of all of the surrounding palaces in Sintra.) 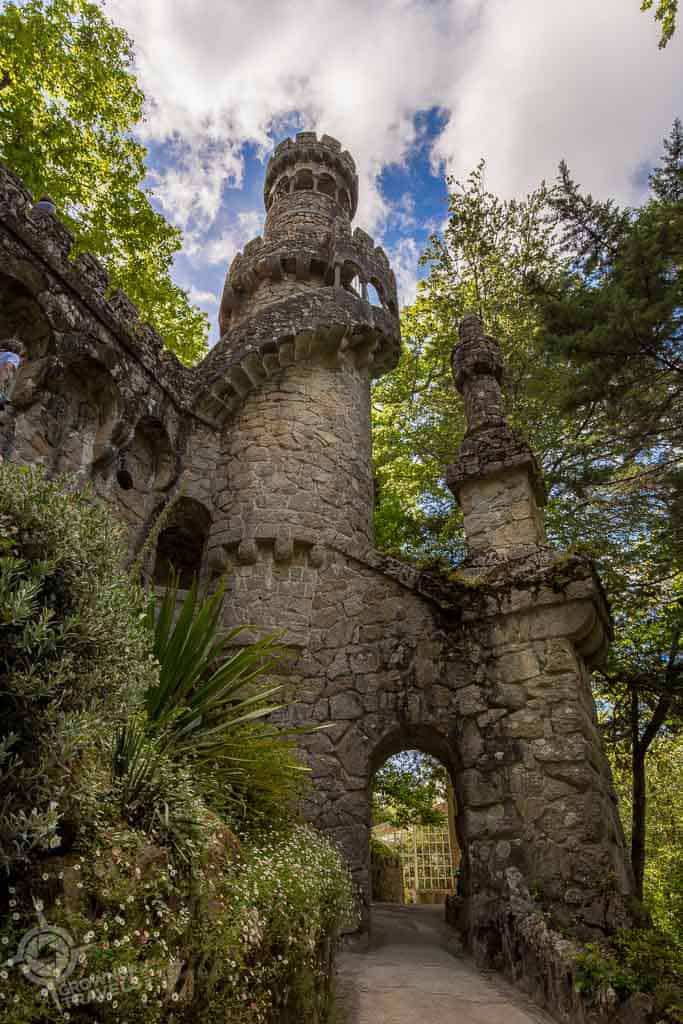 Henk and I didn’t have nearly enough time to explore all of Quinta da Regaleira on our first visit, and it obviously left us both wanting more – because two weeks later, on our way back to Lisbon before flying home to Toronto, we took an unplanned detour so that we could pay this magical place another visit. Someone else admiring the beauty of Quinta da Regaleira

It’s not often that a place or event lives up to your expectations, but Quinta da Regaleira is one of those places. Like the town of Sintra itself, there’s so much here one visit just isn’t enough.

TIP: To get the most out of your visit to Quinta da Regaleira, allow at least a half day. Explore the grounds on your own self-guided tour (admission is 6 Euros), or consider a guided tour (worth the extra 4 Euros you’ll pay for the insights and history).