For anyone who has been to Ireland, you will know that pub culture is a good part of Irish culture. Young and old gather at their favourite ‘local’ to socialize, down a pint, and enjoy a bit of ‘craic’. So any visit to the Emerald Isle should include a decent amount of time immersing yourself in this tradition, a goal that I managed to achieve quite handily on a visit to Belfast last fall. My late September visit coincided with the city’s annual arts and culture festival known as Culture Night Belfast, a dusk-to-dawn one-night event that brings out the absolute best of the city.

With over 300 free events taking place at 150 locations across town, Culture Night offers everything from elaborate mural painting to musical performances to interactive family-friendly activities happening all around the city. Of course, I also hit up some of the most iconic and interesting bars in the city (all in the name of research of course) and was smart enough to jot down their names before I forgot them so that I could let others follow in my footsteps. Here then is your Culture Night Belfast Pub Crawl Guide for Grownups!

Before and After mural painting at the Bullitt hotel in Belfast

Technically speaking, the Dark Horse isn’t called a pub, but instead describes itself as a coffee house and great spot for lunches. But of course it is fully licensed and it’s interior couldn’t be more classic pub with its rich mahogany ceilings, plenty of antique mirrors, a polished pewter bar and all kinds of decor items and artefacts collected from some of the city’s historic buildings. Come Culture Night Belfast, it’s the Dark Horse’s location right in the HalfBap area of the Cathedral Quarter that makes it the perfect place to start your pub crawl as it puts you squarely in the heart of the action. What also makes the Dark Horse a must-see stop on your Culture Night Belfast Pub Crawl is that it is one of the few bars in Northern Ireland boasting a Game of Thrones wooden carved door. Made from the wood of fallen trees that came from the country’s Dark Hedges (also seen in the TV series), there are 10 of these magnificent doors installed in several pubs around Northern Ireland where the series is shot, each one with a different themed carving. They are absolutely worth seeking out even if you aren’t a GOT fan, but if you are one, I just gave you another great idea for a pub crawl! You’re welcome. Right opposite the Dark Horse (well, that makes it easy for a pub crawl, doesn’t it?) is their sister pub, the Duke of York, both of which share a private courtyard that almost qualifies as its own destination, making this stop a “pub-and-a-half” on my crawl. An umbrella canopy ushers visitors in from the narrow, pedestrian-only alley known as Commercial Court to a space that is lit with fairy lights overhead and decorated with murals featuring local residents. An umbrella canopy welcomes you into the Dark Horse’s courtyard Murals in the courtyard of the Dark Horse include local residents

During Culture Night, the space functions as an outdoor music venue and impromptu dance floor, with patrons of all ages dancing and singing along to favourite tunes, both of which are a mandatory in my mind for any good Irish pub crawl.

Local music is as much a part of John Hewitt’s pub as the ciders and Guinness on tap, whether the pub is hosting the finest Irish Traditional music on their Saturday afternoon sessions, or contemporary artists the rest of the week. Located in the Cathedral Quarter, the John Hewitt prides itself on its great gin, but on Culture Night Belfast last September, it was the Irish cover band Finvola playing there that won me over. Not sure whether it was the red-headed lead singer with her fairy-green dress, or the fact that she had her daughter and friends join her on stage, but I became a fast fan. (This was also the 3rd stop on our crawl so I was definitely getting into the spirit of Culture Night!)

What would a Belfast pub crawl be without including the oldest pub in the city? Kelly’s Cellars has stood on its spot in Bank Square since 1720, and in keeping with its grand tradition, the owner and staff still speak traditional Irish. With it’s whitewashed walls, low doorways and cozy firelit interior, it’s easy to imagine this as the watering hole it once was almost 300 years ago (except of course for the band playing ‘I will survive’ which I happily belted out in full voice along with them.) 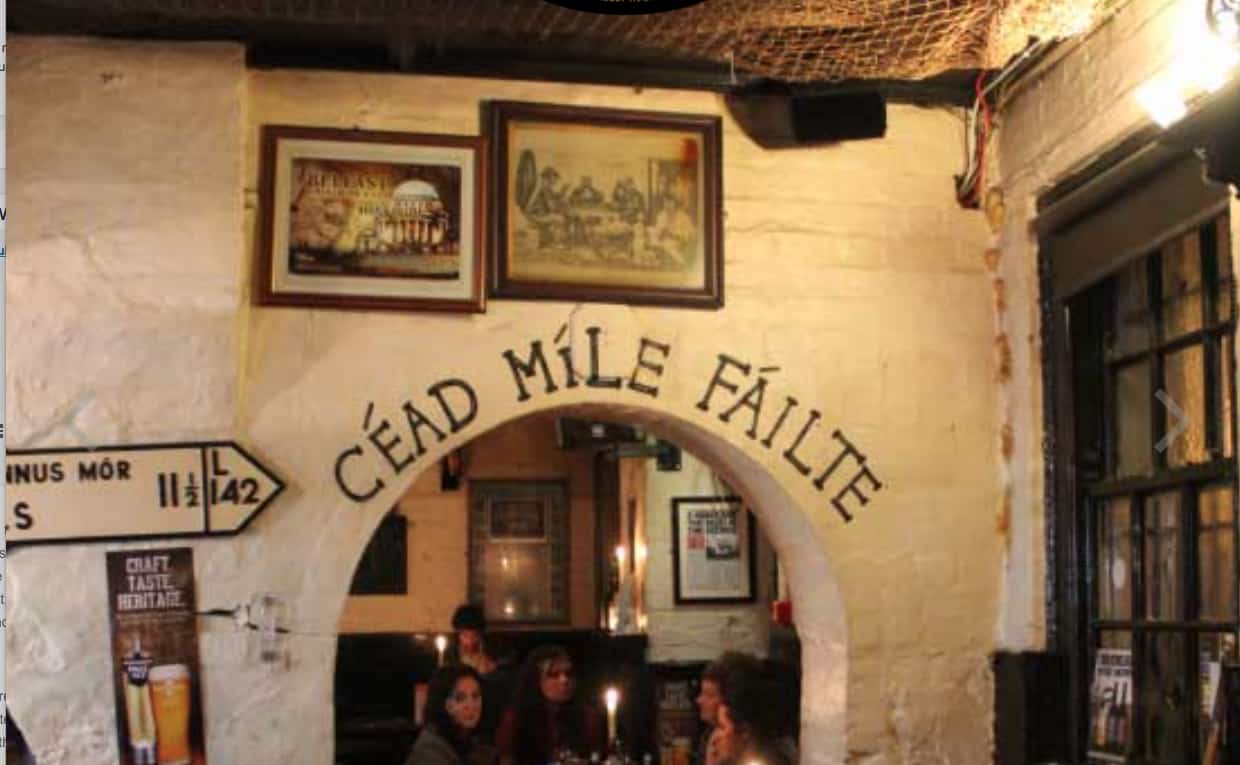 Kelly’s Cellars is Belfast’s oldest pub – and most charming. *Photo from website

I’m not sure whether they lived up to their promise of serving “the best pint of Guinness in Belfast”, but Kelly’s Cellars was without a doubt the most charming pub we hit on Culture Night. (And according to their Facebook page, Ed Sheeran likes to pay the odd visit, too!)

The last place we hit for my Culture Night Belfast pub crawl likes to refer to itself as a ‘simple corner pub’, and stands on a site where there has been a public house for over 100 years. But what made the Sunflower Public House stand out for me was that it is one of the few pubs in the city that still keeps a security cage on its front door, a holdover from 1980s Belfast when violence ruled much of the city. Thankfully there is no longer any need for these ‘caged’ entrances to control who enters the bar, and the new owners who opened the place in 2012 can focus instead on providing good beer and good music, which they do 7 days a week. But I think that it’s pretty cool that the Sunflower actually fought to preserve their cage as a part of the city’s social history. The real surprise inside this simple corner pub is the expansive beer garden/courtyard at the back. Since its opening in 2014, it has clearly become a huge hit with locals where even in winter if the craft brews and ciders don’t keep you warm, the wood fired pizza just might. As our last stop of the night, the Sunflower was the perfect way to top off a great night of Irish drink, song and dance.

Culture Night Belfast: THE Street Party of the Year Belfast has plenty of great reasons to visit at any time of the year, (their beautiful Titanic Museum for one), but Culture Night Belfast is one night you shouldn’t miss. People and music spill out into the downtown streets and squares, you never know what art awaits you around the next corner, and the entire city comes to life celebrating all things Belfast. This is one pub crawl that is as much about fun, friends and culture as it is about Guinness, so go find your new ‘local’ and pretty soon you’ll soon feel like one yourself.

TIP: This year marks the 10th anniversary for Culture Night Belfast which takes place on Friday, September 21, 2018. For more information on specific actives and events, check their website a little closer to the date or just plan to be in Belfast and join in on the fun.