Titanic, Belfast: A Museum That Does The Story Justice 1932 Sinking of the Titanic by Willy Stoewer *Public Domain

“As the smart ship grew In stature, grace, and hue, In shadowy silent distance grew the Iceberg too.” (excerpt from Thomas Hardy’s poem about the Titanic, The Convergence of the Twain)

There’s something about the story of the Titanic that draws me in, no matter how much I know about what happened, or how many documentaries or movies I’ve seen about the disaster. Perhaps it is the hubris in the claim that something created by man was ‘unsinkable’; perhaps it was the sheer scale of human tragedy that makes this story so gripping, not unlike the attacks of 9/11. The huge loss of life, the stories of the people lost, and especially the fact that so many of those killed knew for hours that they would die makes these types of disasters incredibly poignant for me.

So when I had the chance to visit Titanic Belfast last week, I was not at all surprised by how moved and fascinated I was by my visit, or why this museum/experience has been named the World’s Leading Tourist Attraction. Titanic Belfast was opened in 2012, to mark the 100th anniversary of the sinking of the ship, and just last year was named the World’s Leading Tourist Attraction, a pretty impressive honour when you consider it was up against the likes of Machu Picchu and Mt. Kilimanjaro. But after my visit, I can certainly understand why it has received such critical acclaim. Let’s start with the building itself:

Rising to the exact height of the deck of the great ship herself, the structure of Titanic Belfast is beautifully designed, from the rusted, cut-out steel letters of the name that greet you out front, to the “ship-shape” of the building whose silver and white faceted exterior is a stylistic nod to both a ship’s bow and the icy waves of the North Atlantic. The building’s location is literally meters away from the original slips where the Titanic and its sister ship, the Olympic, were built, now a concrete plaza with symbolic designs that remind visitors of what was once there: looking down from an observation room within the museum, you can see the white outline that comes to a point, representing the famous mega-ship and where it would have rested. There is also a map of the Northern Hemisphere blocked out in two colours of stone pavers that shows the route of the Titanic. Even more meaningful are a circle of wooden benches around the building, some short, some long, that represent the Morse code distress signal sent out from the Titanic saying “Come Quickly Distress”. Wooden benches around the building represent the dot-and-dash distress call sent out from the Titanic.

The experience within the museum is a self-guided one that takes you through 9 Galleries, starting with the first gallery that introduces the visitor to ‘Boom Town Belfast’. This gallery puts into context the role that shipbuilding played in the industrial and economic boom of the early 20th century that saw Belfast’s population swell to over 300,000, with more than 35,000 working for the Harland and Wolff shipyards who build the Titanic. The original gates from the Harland and Wolff shipyards

Continuing through the subsequent galleries, the museum chronicles the construction of the ship itself with the Shipyard ‘Ride’, a unique, immersive experience where visitors get into roller-coaster-type cars that travel up, down, and through a mockup of the Titanic’s construction site, with audio and video presentations that make you feel like you are actually at the shipyard itself. The sound of the white-hot rivets being pounded into the steel plates of the ship is just loud enough to help you understand why many workers were left permanently deaf after working the yard, and why the sound of the riveters could be heard kilometres away from Belfast.

Feel the Engines for Yourself

Technology has been used in both powerful and subtle ways within the museum to bring the Titanic back to life for visitors. While standing on a reconstruction of the First Class Passengers’ Promenade Deck, I could actually feel the deck moving slightly below my feet, and when I placed my hand on the deck rail, I could feel the pulsing of the engines below. A reconstructed Promenade Deck allows you to feel the pulsing of the engines when you grab the handrail.

The Humanity of it All

Technology aside, the most compelling part of my visit to the museum had to have been the galleries where the focus was not on engineering, but on the Titanic’s passengers themselves. I was fascinated looking at the 3 reconstructed cabins, representing 1st, 2nd and 3rd class accommodations, finding it impossible not to imagine the people who might have occupied these quarters. Even the 3rd class passengers enjoyed luxuries like running water, and 5 meals a day, something they would never have enjoyed in the homes they were leaving behind. Performing Until the End

One of the most romanticized stories surviving the Titanic is how the musicians were asked to play for the passengers as the ship was sinking, in an effort to calm the rising panic as the ship was going down, and there is a nod to this at the Museum as well. In the 2nd class cabin exhibit, we see a tribute to Wallace Henry Hartley, the bandmaster and violinist who heroically played until the very end and died in the waters of the North Atlantic. A second class cabin, like the one Hartley would have had

His violin was actually recovered from inside a large valise that was strapped to Hartley’s body, and is one of the most treasured artefacts found after the sinking. It’s hard not to read this without imagining these last moments of bravery and sacrifice. 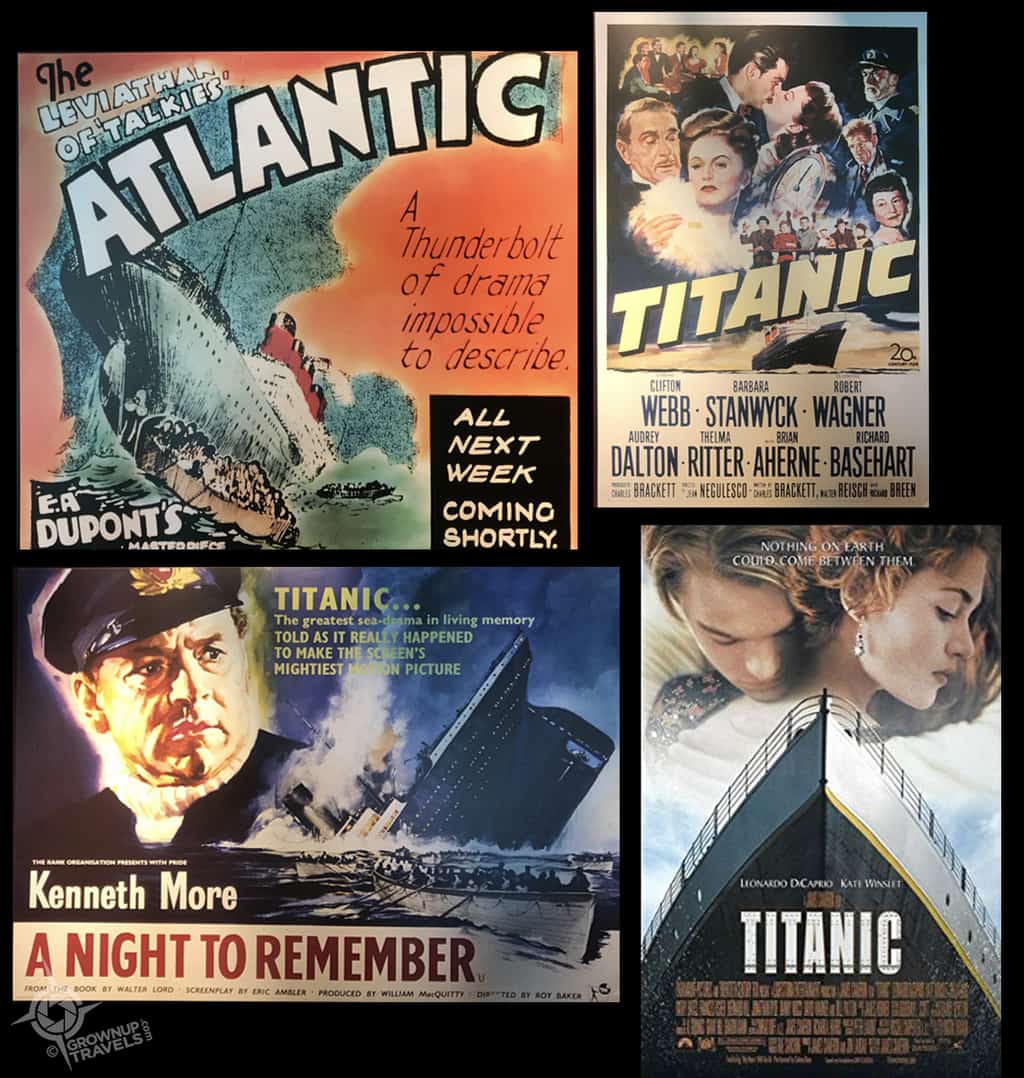 With this kind of pathos and drama, not to mention the prominent ‘cast’ of A-list passengers onboard, it’s no wonder Hollywood’s fascination with Titanic has continued throughout the years. The Museum documents the movies made about the Titanic over the past 100 years as well, with posters from the earliest ‘talkies’ to the most recent blockbuster with which we are all familiar (when I saw this poster, it immediately triggered Celine Dion’s soundtrack in my head.) I have absolutely no doubt that James Cameron’s version will not be the last of the Titanic movies to be made. We all know the fate of the Titanic, but few people may know that there is still one surviving vessel from the White Star Line, the SS Nomadic, which is also in belfast’s Titanic Quarter. Originally serving as the tender for the Titanic, the Nomadic no longer shuttles passengers to and from shore, but instead lies in permanent dry dock a short walk from the main museum building. Entrance to the Nomadic is included in your admission ticket and the ship is well worth visiting for its historic value alone. Walk down the gangplank and you are free to explore the ship above and below decks, watch interactive displays that bring the history of the ship to life, and see some of the same finishing details that would have been on the Titanic itself.

As the last ship of the White Star Line, the SS Nomadic is the only place where you can walk the same decks that Titanic’s passengers once did. Scrollwork on one of the windows of the SS Nomadic

You might even run into a modern-day ‘Molly Brown’, Gayle Campbell, who is one of the guides on-board and an actress who plays the famously unsinkable survivor in local Belfast productions of Titanic. Last But Not Least: Titanic House While it’s not part of the Titanic Belfast attraction, the newly-opened Titanic House is a boutique hotel in the restored Harland and Wolff administrative building adjacent to the Museum. It is here where Thomas Andrews, the managing director and naval architect for the Titanic actually worked, overseeing the drawing room where draughtsmen laid out the designs of the ship, meticulously detailing everything from the thickness of steel plates to the ornate staircase. This historically-significant room has been beautifully preserved and now is the central bar and lounge for Titanic House, and although I didn’t have time, I would have loved to have stopped for a drink here to absorb everything I had just seen. With the ‘bow’ of the Titanic Museum looming large outside its 3-story windows, I can’t imagine a more appropriate way to end my visit to the Titanic Museum than staring out at this impressive vignette while sipping a cup of tea or a glass of wine. View of Titanic Belfast from inside Titanic House

My visit to Titanic Belfast exceeded my expectations, but with one exception: I didn’t get to spend enough time there – which means that I would definitely visit this place more than once, as I’m sure many visitors do. For whatever reason, my fascination with this 100 year-old tragedy never seems to diminish.

Perhaps it’s because even Hollywood can’t write a script as powerful as the true story that is the Titanic.

TIP: Entrance to Titanic Belfast costs 18 Pounds Sterling for adults (as Northern Ireland uses British pounds, but they will also accept Euros and credit cards). Admission includes a visit to the SS Nomadic as well. For more information on location hours and more, visit the website.

Special thanks to Tourism Ireland, who hosted me on my visit to Titanic Belfast (and indulged me when I wanted to take a peek inside the drawing room in Titanic House!)