Navigating the Sunshine Coast with BC Ferries: Getting There is Half the Fun With mountains as a backdrop and a dramatic shoreline that runs the length of British Columbia, Canada’s West Coast is one of the most beautiful regions in the country – and possibly the world. With more than 40,000 offshore islands and hard-to-reach peninsulas jutting into the ocean, there’s no shortage of beautiful places to explore. But getting around BC’s island beauties and isolated coastline takes a bit of planning when it comes to logistics. Fortunately, when Henk and I were planning a visit to the Sunshine Coast, one of the more popular regions on the coast, BC Ferries provided plenty of options to take us there. And we learned that getting there really was half the fun.

Our Sunshine Coast Route with BC Ferries

This being Henk’s first trip to the West Coast, I was determined that we make the most of it, by seeing not just Vancouver Island but also a bit of the Sunshine Coast and the city of Vancouver itself. In order to do that, a road trip was in order, so along with mapping out an overland itinerary on Vancouver Island, we also needed to coordinate our passage across the waters and back to the mainland. Our route from Vancouver Island to the Sunshine Coast to Vancouver

Our plan was to spend a week or so touring Vancouver Island, then head over to the Sunshine Coast (with a name like that, who wouldn’t want to explore it a bit!), where we had booked a beautiful boutique hotel near Halfmoon Bay. From there, we would head to Vancouver before flying back home to Toronto. This itinerary meant we needed to take 3 ferries, so we needed to research not just the ferry departure times that would take us from point A to Point C, but also the driving times between to ensure we had enough time to make our connections.

TIP: If you Google ‘Driving Times Between X…and X’, you get a good idea of the time you need to allow for each driving leg of your trip (but be sure to add extra time if you are moving between larger cities during rush hour – fortunately not a problem on the Sunshine Coast!)

Meet Salish Orca, 1 of 3 Eco-Friendlier Ferries in the Fleet The Salish Orca, 1 of 3 natural-gas powered vessels operated by BC Ferries

The first leg of our journey was from Comox on Vancouver Island over to Powell River, taking Henk and I across the Salish Sea (part of the Georgia Straight between mainland BC and the Island.) Luckily for us, we would be guests aboard one of BC Ferries’ newest vessels, the Salish Orca. All three of the new Salish vessels in the fleet are powered by natural gas, a more eco-friendly alternative that reduces emissions annually by as much as the equivalent of 633 cars. Considering that the Salish Sea has been an important resource for the West Coast Salish people for thousands of years, this respect for the waters and the environment is good to see.

Indigenous Art is Part of the Salish Fleet 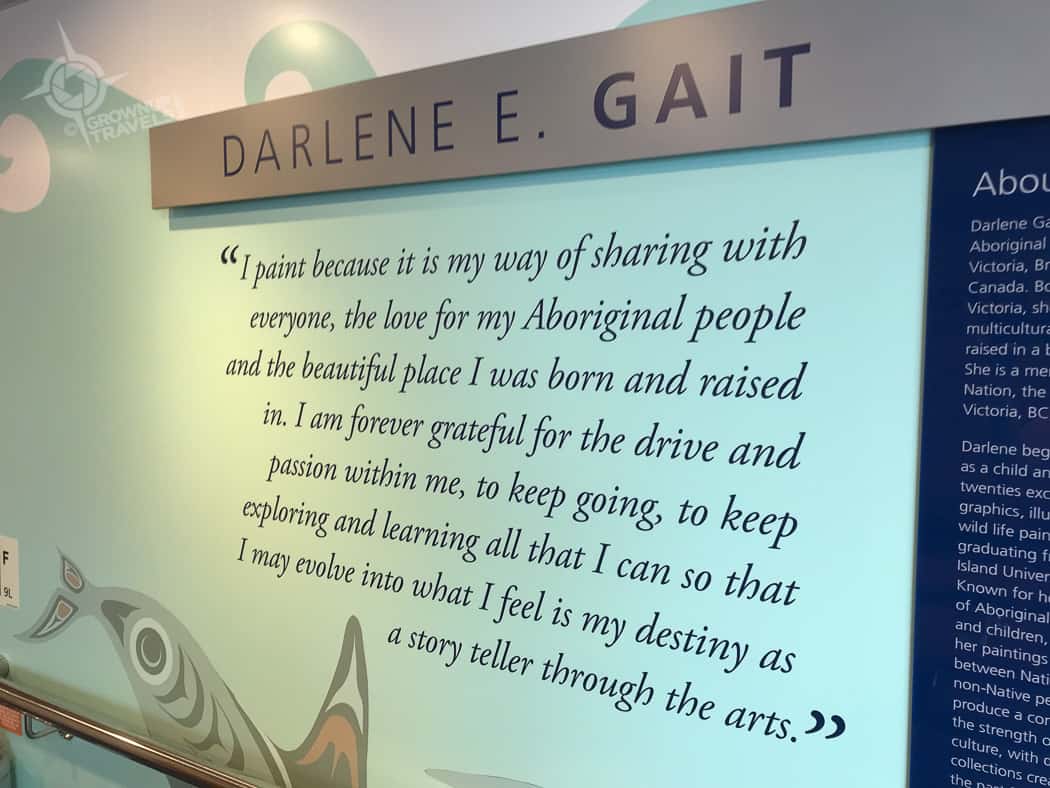 Darlene E. Gait is the Salish artist who designed the Orca’s artwork

Not only is each Salish vessel more eco-friendly, each acts as a canvas for a local First Nations artist, whose designs decorate the exterior of the ships. In our case the art adorning the Orca is the work of Darlene Gait from Esquimalt Nation, a celebrated Indigenous artist whose work also appears on a collection of coins from the Royal Canadian Mint. Being privately owned, BC Ferries takes customer satisfaction seriously, and offers more than just a service to move people and goods from place to place: making the journey as pleasant as possible is important too, and they’ve taken care to provide amenities to ensure that. We found everything we needed and more on board the Orca.

Forgot to hit the bank before embarking? No problem: there are ATMs on board. Have some work to do while on board? Study carrels with charge ports for your laptop and phone are provided as well as free WiFi. There’s a play area for the kids, and a good retail store in case you didn’t pack that extra fleece. And of course, if you are hungry, the Coastal Cafe can provide hot or cold self-serve food options. But the best part of our ferry trip was that Henk and I could both take in the views, relax, read a book, process some photos and let Orca do the driving and navigating!

Disembarking was quick and efficient at Powell River, giving Henk and I more than enough time to drive the 20 minutes or so to Saltery Bay where we would catch our second ferry over to Earls Cove on the north end of the Sechelt Peninsula.

The Sechelt Peninsula on the Sunshine coast is part of mainland British Columbia, but it might as well be an island: there are no roads to this area and the only way to get to the Peninsula is by air or sea. Because we were driving, the ferry was a great option that not only allowed us to seamlessly move the car between destinations, but we also got to enjoy great views from the water as we navigated around the islands and coastline. Plus our late afternoon departure from Comox meant that by the time we departed Saltery Bay, we were just in time for a “sunset cruise” at no extra charge. (Timing is everything!)

TIP: The Saltery Bay ferry terminal is small and has no place to shop or eat, so until you get on the ferry, you’re on your own food-wise so you might want to pack a snack if you’re prone to getting ‘hangry’ like I am.

Langdale to Horseshoe Bay, then on to Vancouver

After spending two nights enjoying a little glamping, dining and hiking in Halfmoon Bay, Henk and I set out for our final ferry hop from Langdale over to Horseshoe Bay, from where we would drive to Vancouver.

We allowed much more than the 45 minutes needed to drive to the Langdale ferry terminal from Halfmoon Bay, in order to explore the town of Gibsons, best known as the location where the Beachcombers TV series was filmed back in the 1970’s. Henk and I both remembered watching this series growing up, and we couldn’t resist grabbing a bite at the former set of Molly’s Reach, which has been renovated and operates as a present-day restaurant with plenty of Beachcomber memorabilia inside. 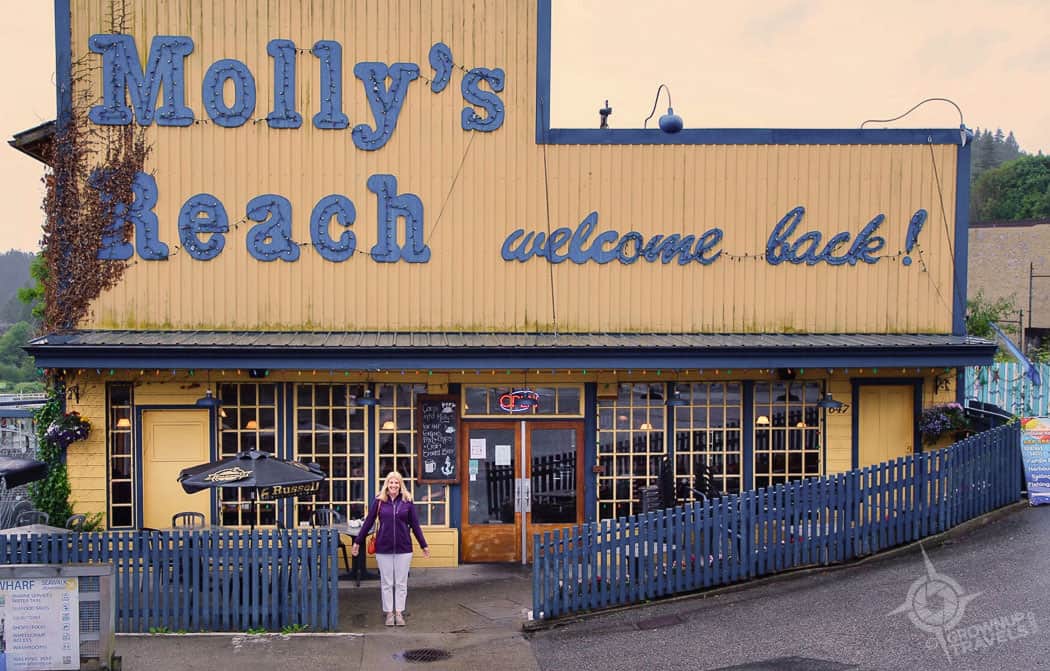 Here on the waterfront hub known as Gibson’s Landing, there are also several cute boutiques and galleries, and of course the wharf which has a few charming features as well, including a floating house or two.

Leaving Gibsons behind, Henk and I headed to Langdale, and enjoyed our final ferry ride past Bowen Island to Horseshoe Bay, about 30 minutes’ drive from Vancouver. Our last ferry was a peaceful way to end our visit to the Sunshine Coast before returning to the hustle and bustle of the city of Vancouver.

When it comes to planning your own escape to the West Coast, it’s easy to get all the information you need in terms of ferry schedules, fees, etc, from BC Ferries website. But it does mean you need to do some planning to coordinate your ferries, research and find accommodations, allow for driving time, etc.

TIP: If you book your ferries ahead of time and not last minute, you can save a little on the ferry cost.

If all that logistical planning sounds like too much of a headache for you, there are also packaged vacations that BC Ferries Vacations has put together to make it easier for you. They literally do all the work, by organizing the ferry transportation and hotels for everything from 1-night getaways to multi-destination holidays.

Regardless of whether you plan your itinerary yourself, or leave the planning to them, one thing is certain: when it comes to getting around the West Coast, getting there with BC Ferries is definitely half of the fun.

Special thanks to BC Ferries who provided ferry transportation for Henk and I on our Comox-to-Horseshoe Bay itinerary.