I’ve officially become a Tree-Hugger. Actually, I think Henk and I have both become Huggers following our recent trip to Vancouver Island. It seemed only natural to want to wrap our arms around giant trees when we found ourselves surrounded by Douglas Firs and Red Cedars that are hundreds of years old and hundreds of feet tall. These old souls are one of the West Coast’s endangered treasures, and our touchy-feely affection for them developed after we explored two of the most beautiful old growth forests on Vancouver Island, one a little-known gem near Port Renfrew, and one so accessible that hundreds of people drive right through it every day.

Two hours or so north of Victoria following a scenic drive along Vancouver Island’s West Coast Highway 14 lies Port Renfrew, a collection of seaside communities almost too small to be called a ‘town’ proper. It may be small in population but the Port Renfrew area is huge when it comes to natural attractions, including wild Pacific coast beaches and a beautiful old-growth forest that has only recently been saved from the lumberman’s axe: Avatar Grove. 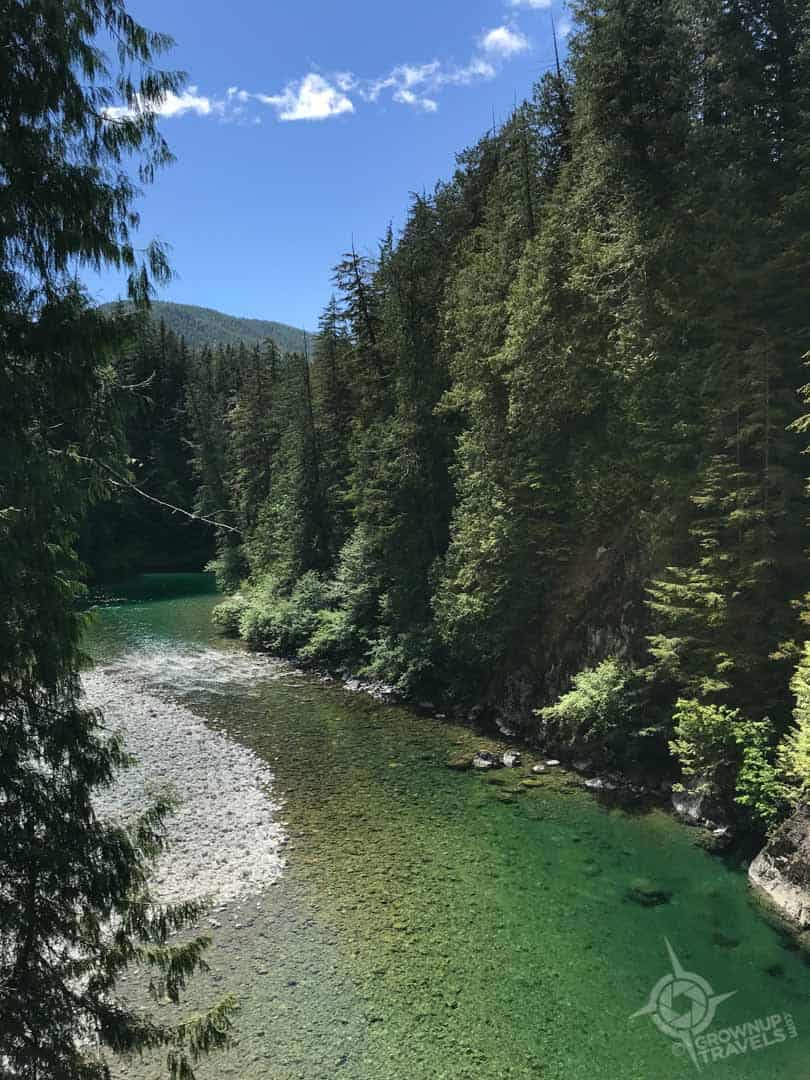 The scenery near Port Renfrew is pristine and beautiful

Avatar Grove’s history is both a long and a short one, depending on how you look at it. Some of its oldest trees have stood as silent witnesses to natural and human evolution here for over 1000 years. Even the Pacheedaht First Nation who have called this area home for hundreds of years probably remember these trees as always being part of the land. But it is only in recent history that Avatar Grove’s legacy has been brought to light and preserved, thanks mostly to the efforts of “big tree hunter” TJ Watt. A local resident and photographer, Watt was on the search for old growth trees near the Pacheedaht territory at Port Renfrew when he spotted the telltale silvery ‘candelabra’ tops that signified the presence of old red cedars – really old ones. Hiking off the old logging road he found magnificent old growth Douglas Firs and burly Red Cedars. What Watt also discovered were tags indicating that the grove was actually slated for logging. Watt immediately set out to lobby for the grove’s protection with the help of Ken Wu and other members of the Ancient Forest Alliance, a non-profit organization that he co-founded in 2010 to help preserve old growth forests and promote sustainable forestry practices in BC. The AFA was successful in saving the forest in 2012 and subsequently named Avatar Grove after the James Cameron film where the planet’s ‘Hometree’ plays a significant part in the story. Our guide to Avatar Grove, Sheenah Duclos, who runs nearby Wild Renfrew resort.

Avatar Grove is still mostly a wilderness area, but thanks to the Alliance’s volunteer efforts, work has begun to make the forest more hiker-friendly with boardwalks and defined trails that will help protect the trees as well. Trails run on both sides of the road and each have unique features worth discovering like the Upper Avatar Grove’s ‘Canada’s Gnarliest Tree’, a giant burled red cedar with forked trunks that spring from its bulbous trunk. Interesting Fact: Some Indigenous groups would mark significant events in the lives of their community, such as a young girl’s first menses, by cutting a young tree in such a way that two trunks would grow from the ‘scar’. These are considered to be culturally modified trees, and some believe that the Gnarliest Tree with its forked trunk may be one of these. The trail to Lower Avatar Grove on the opposite side of the road starts at a viewing platform before descending to the forest floor. The climb is definitely worth it as the lower trail is beautiful with giant fallen trees acting as ‘nurse logs’ to hundred-year old ‘saplings’. It might also be home to Canada’s ‘second gnarliest tree’ (given that these designations are more arbitrary than official). In May of 2017, the Ancient Forest Alliance announced more good news: they’d identified another beautiful old growth forest on Vancouver Island not far from Avatar on the Juan De Fuca trail, which includes a tree they estimate to be between 500-1000 years old. Nicknamed “Jurassic Grove” for now, plans are in the works to protect the 130 hectares, 40 of which are still vulnerable to logging. Until then, the specific location will not be made public, but the new location is apparently even more accessible than Avatar Grove.

TIP: The hikes to upper and lower Avatar Groves are intermediate level with plenty of roots and logs, and slopes that can get quite muddy after it rains. Wear appropriate footwear and know your ability. For directions on how to get to Avatar Grove, check the Ancient Forest Alliance website.

While Avatar and Jurassic Groves may off the beaten track, it’s impossible to miss Cathedral Grove if you are driving across Vancouver Island on Highway 4 – because you will literally drive right through it. Cathedral Grove’s trails are well marked and easily accessed from the road.

You’ll know you’re getting close to the Grove when it feels like it is getting darker, thanks to giant trees creating a forest canopy above the road (the parked cars along both sides of the highway are also a dead giveaway.) But don’t think that something this accessible is not worth a stop: Cathedral Grove is one of the most beautiful old growth forests on Vancouver Island and you should allow at least a couple of hours to explore it.

Located in MacMillan Provincial Park, the trails through Cathedral Grove are very hiker-friendly with interpretive signs identifying tree species, boardwalks and bridges (some of which are literally constructed on the tops of fallen logs). Despite the high winds that ripped through here in 1997, shattering and uprooting dozens of trees in what’s known as a ‘windthrow’, this natural event has helped the forest regenerate by allowing new growth to spring up in the open, sunlit spaces. In 1997 high winds uprooted and shattered trees, flinging them into piles called ‘windthrow’

Even with the popularity of Cathedral Grove and its easy access, it’s just as easy to find a private bit of forest to yourself by hiking a little ways in. Henk and I actually wandered a little off-trail by accident, which led to some interesting discoveries of our own…

Could Lord of the Ring’s Treebeard be living in Cathedral Grove?

The Biggest Tree in Cathedral Grove

The trail you don’t want to miss is the one that takes you to the Park’s largest tree on the south side of the highway, an 800-year old Douglas Fir which you really have to see to believe. I’m not usually a fan of including people in photos of nature and landscapes, but it’s only by seeing a human beside these trees that you can put the massive scale of these giants into perspective. Humans are needed for scale with trees this big

Saying Hello and Goodbye? to the Most Beautiful Old Growth Forests on Vancouver Island

Only about 5% of old growth forests remain on southern Vancouver Island, a sad statistic that means these magnificent trees will one day be gone forever. Walking amongst them, their branches dripping with old man’s beard and other mosses, you can’t help but fall hard for Mother Nature. She had us at ‘Hello’ when she invited Henk and I into her oldest forests, surrounding us with their majestic beauty – so it felt only right to return her embrace with a hug of our own. Trees this old deserve a hug

Special thanks to Victoria Tourism who invited Henk and I on a press trip to Avatar Grove, and to Wild Renfrew Resort who hosted our stay nearby.