An Artefact That Speaks to the Fragility of Earth’s Creatures The Story: I typically make it a habit not to purchase anything while I am travelling until the end of any trip, for fear that anything fragile or precious may not survive while I am still on the move. (I am, in fact, notorious for bringing home objects that are either extremely heavy, cumbersome or fragile – and went through a few hilarious antics trying to describe bubble wrap in a language I didn’t speak – but that’s another story!)

I made an exception to my end-of-the-trip-only purchase rule when I saw this 14-inch hand-carved wooden Maasai giraffe in a local craft shop on mainland Tanzania. I decided to purchase it before leaving for the island of Zanzibar where we were going to spend another 5 days or so, because I was worried that I wouldn’t find anything like it on the island and there would be no chance of returning to the mainland before flying home. The decision to buy my little giraffe turned out to be a good and bad one: good because when it comes to hand-made art, every single item is a little different, and no two are ever exactly alike, so if you fall in love with something unique, you should grab it while you can. In this case, there was something in particular about this giraffe’s subtle details that made me choose it – I think it reminded me of the Maasai people after which this giraffe species was named: elegant, graceful and beautiful.

The bad came later: four flights later, in fact, when despite all my precautions, I unwrapped my little giraffe to discover that it had suffered a broken neck en route to Canada.

Fortunately, a little repair was able to fix the break with no visible damage, but it made me stop and think about the fragility of the actual creatures we had been privileged enough to see in the wilds of Tanzania. Incredibly graceful despite their seemingly awkward height and proportions, these animals are the national animal of Tanzania, and represent everything that is wild and beautiful in Africa. It was always a surprise when we first saw one, then two, then a dozen, and even more surprising when we ‘lost’ these 14-foot tall animals behind the acacia trees, as they grazed freely in the country’s many national parks. In fact, one of the highlights of our trip was when I got to ‘walk with giraffes’  in Arusha National Park, without having to ride in a jeep. I got pretty excited about that, because being on the ground with these animals is somehow very different than viewing them from a vehicle. 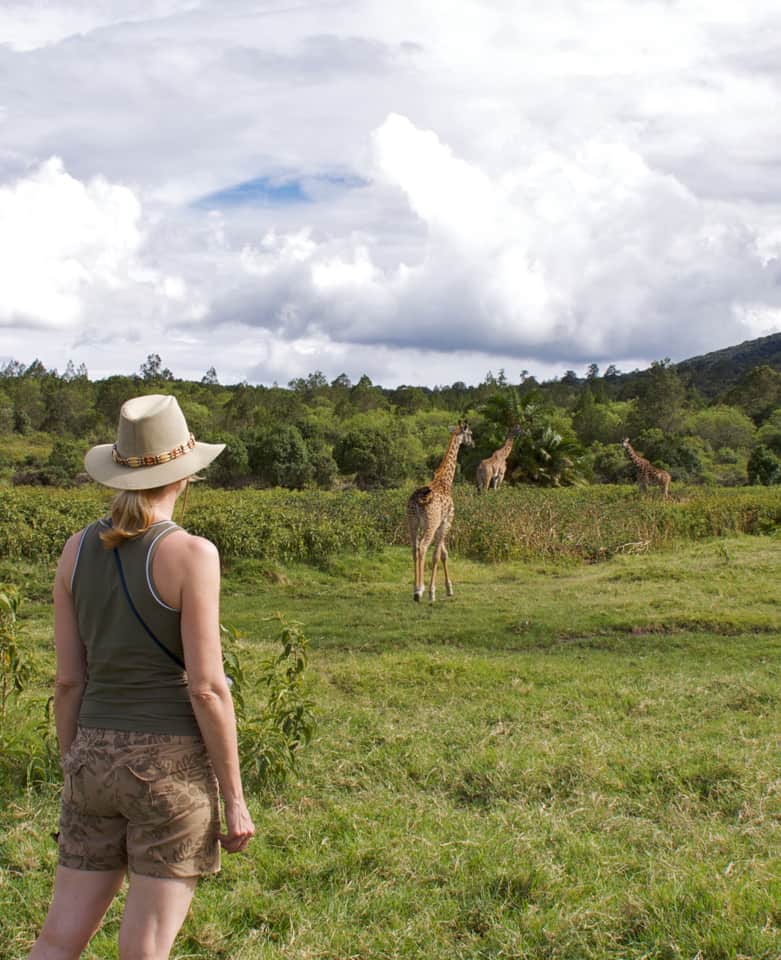 It IS possible to lose a giraffe in the trees! Can you see the baby?

Reminiscing about these experiences back in Canada, while I glued my little giraffe back together, I couldn’t help but wonder how long it might be before we lose these beautiful creatures altogether. Would future generations have the same opportunity to see these animals in their natural world, the way that we had?

Which is what I think of every time I look at this little giraffe – and which makes it, like the living animal itself, all the more precious.

The Fact:  There are currently hundreds of endangered species in Africa, some only found in Tanzania, and it is increasingly difficult to balance the needs of people with the needs of the animals. Some of the cost of balancing this falls on the shoulders of travellers like myself, with higher park entrance fees making it possible to maintain wildlife and natural preserves. And in the grand scheme of things, I’m okay with that.