4 Places to Eat in Montréal, Québec Where to Eat in Montréal

Some posts are harder to write than others, but this one is a no-brainer. Montréal is known for its food scene, and when Henk and I were there a few weeks ago, we got a chance to try out some of the ‘old’ and new restaurants around the city, (all of which were new to us) which delivered everything we would expect from a foodie city. Here are 4 places worth checking out if you want to know where to eat in Montréal.

1. The Tried and True: L’Express L’Express Restaurant is one of those ‘classic’ restaurants you might expect to find in Montréal, both for its black-and-white traditional Bistro decor, and the type of French cuisine that it has been serving since 1980 – menu items like roasted quail, and steak tartare, for example. But what makes this restaurant more than just a food institution is that you know the owners here treat their staff as well as their guests: just have a look around the walls of the restaurant where you’ll see framed staff photos that go back to the beginning. (What other restaurant proudly displays its employees’ photos like you would family portraits?) Our waiter had worked here for 20 years himself, and some of the chefs have clocked 30, and their commitment and experience shows in the service and the food quality. L’Express is clearly a favourite with visitors and locals alike, who like to linger and laugh over their wine, so settle in for a meal that will be as relaxed as it is flavourful. The only place more ‘Paris’ than l’Express, would be… Paris. A new entrant onto the food scene in Montréal, Jellyfish Crudo + Charbon (or just ‘Jellyfish’ to keep it simpler to remember) is one of those perfect combinations of the right ambiance, amazing food, and on-point service that is not the least bit stuffy. Loft-like decor makes you feel comfortable and trendy at the same time, and the waitstaff are happy to make recommendations and offer suggestions for wine pairings. 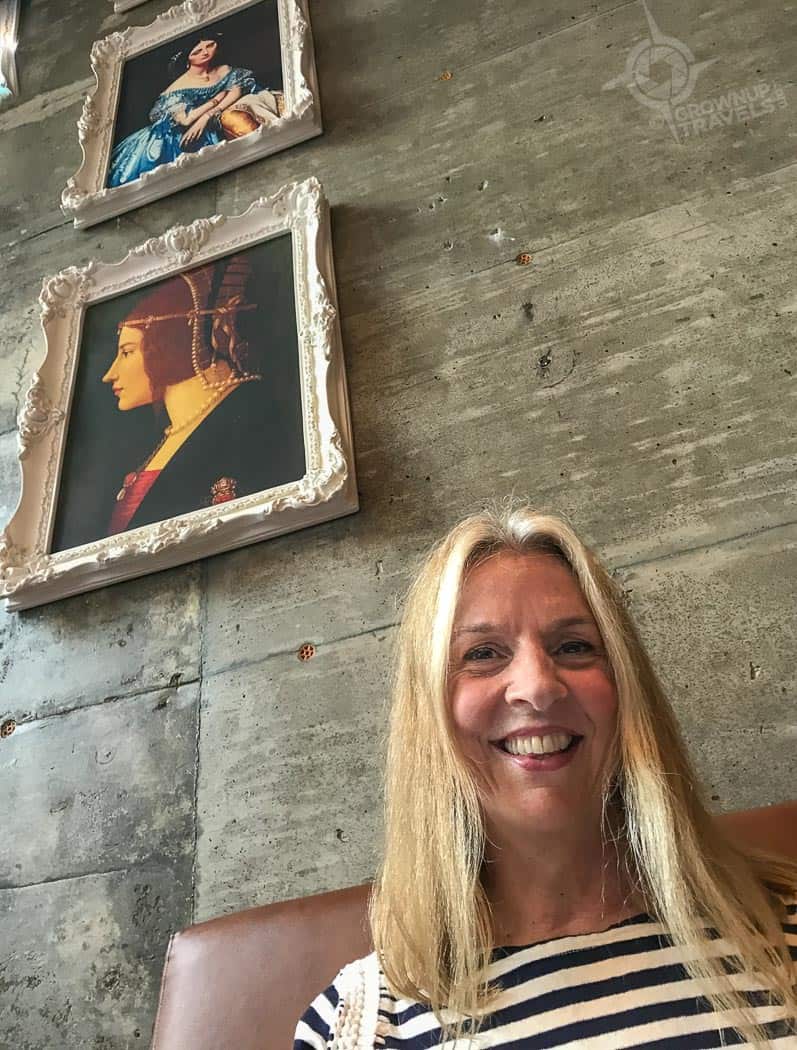 Keen to get started on my meal at Jellyfish.

Don’t let the name ‘Jellyfish’ fool you, though: this is not a seafood-only place, and there are plenty of serious meat dishes for the carnivores out there. Much of the menu is meant to be shared, although I didn’t really want to give up any of my own burrata or veal short ribs (not even to Henk), they were that good. My veal short ribs were too good to share!

I think Henk felt the same way about his steak, but we did spread the love a bit with our charcoaled heirloom carrots, just to keep in the sharing spirit of the place. Henk’s steak was melt-in-your-mouth and also, too good to share!

3. More than Dinner-and-a-Show at Taverne F If you’re here for Montréal’s International Jazz Festival, there probably isn’t a better location to enjoy the shows while dining on tasty Portuguese food than at Taverne Portugaise F. Situated right in the Quartier des Spectacles plaza, Taverne F’s location off to the right of the main stage will have you feeling like you are definitely part of all the action when the acts are in town, but more importantly, the food will have you coming back, even when the Festival is long gone. The food is affordable (there’s a terrific $24 three-course lunch menu that gives you plenty of choices to mix and match), and the menu offers everything you love about Portugal, including the pastéis de nata custard tarts the country has made famous.

Of course there’s also an item on the menu I can never resist (foie gras) so I had to order it, just to remind myself that I was in Montréal, after all. 4. At the Heart of the Jazz Festival: Le Blumenthal restaurant

Blumenthal isn’t just located in the Maison du Festival, the administrative building at the heart of the Montréal Jazz Festival, it’s an integral part of the Festival itself. That’s because the restaurant operates as a non-profit establishment whose proceeds go towards funding many of the free shows, as well as paying the staff who work them. 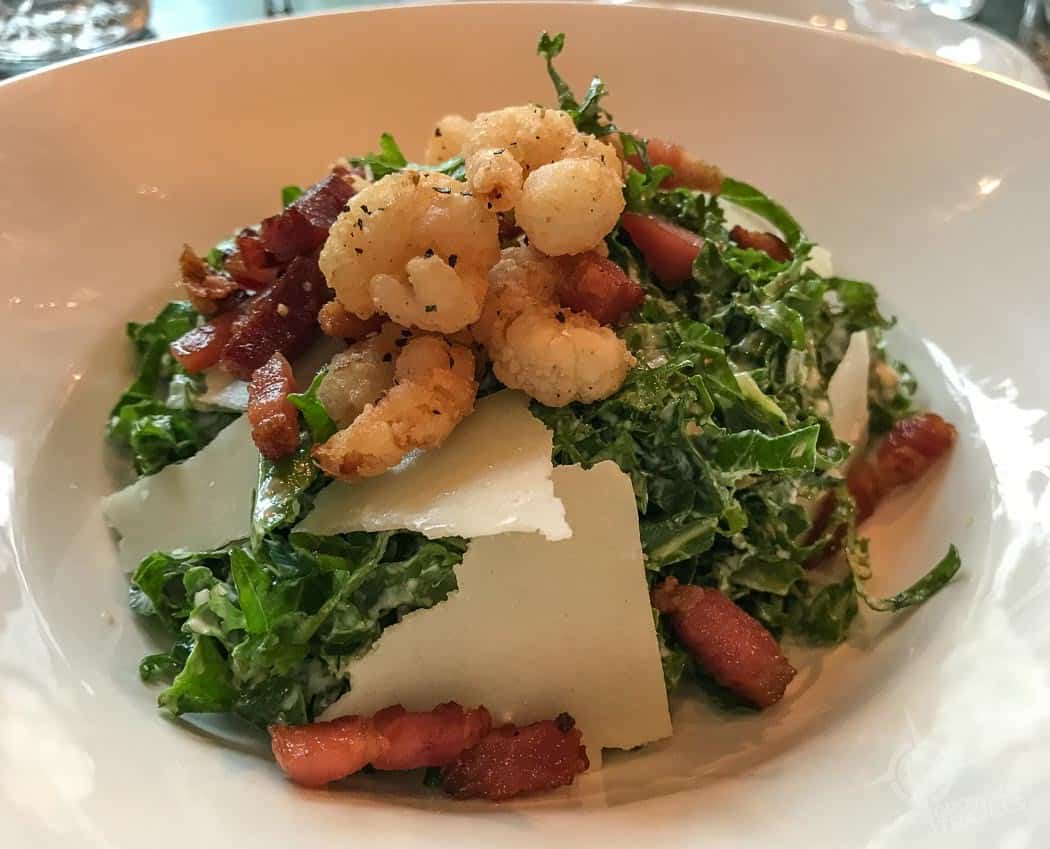 The food here is no charity case, though, nor is it the typical tourist fare that its Festival-central location might suggest. Instead, local ingredients play a serious role in Le Blumental’s menu which is varied and interesting. I shared the kale and shrimp appetizer salad and the burrata (yes, a favourite!), followed by trout which was great. There are a few surprises at Blumenthal as well, like their signature Creme Brûlée: this is unlike any brûlée you’ve probably encountered before, as it is made with a mushroom that actually imparts a maple syrup flavour! Called the lactaire à odeur d’érable, this mushroom is unusual because when dried – and only when dried – it develops a natural maple flavour and the mushroom can be ground up and used in sweet custards and sauces. 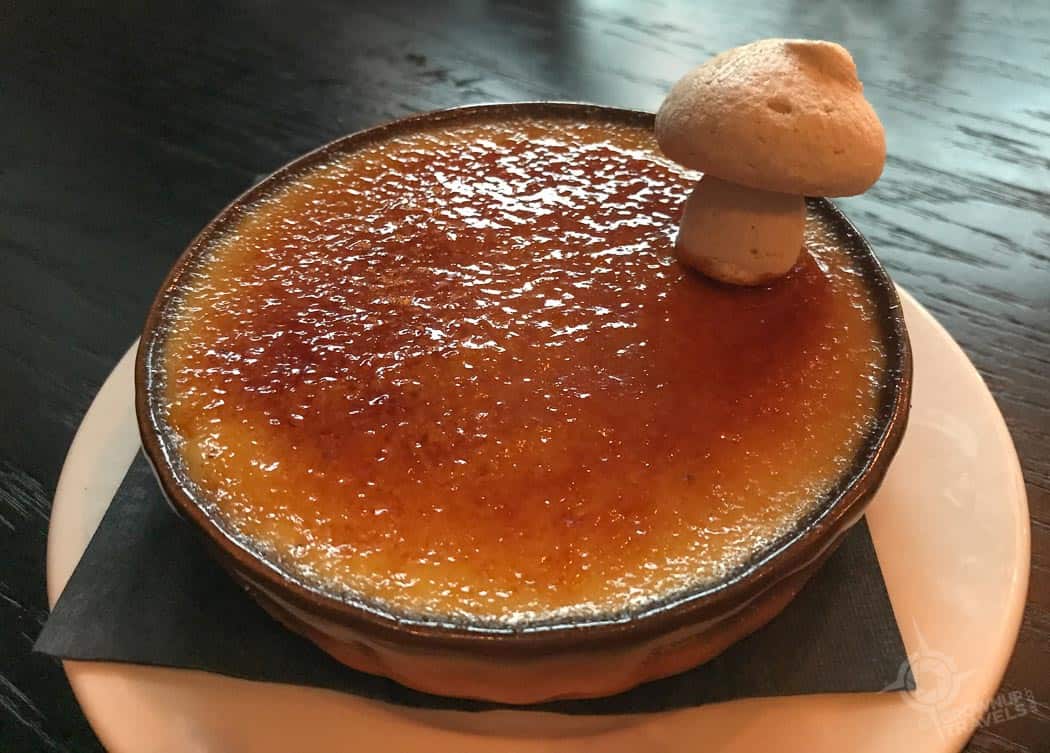 Blumenthal’s Creme Brûlée made with mushrooms (the one garnishing it is made of meringue, though!)

I was curious enough to try this ‘magic mushroom’, and the creme brûlée was delicious with just the right hint of maple. (Duly impressed, I went on the hunt for this mushroom and was able to find some at Montréal’s Jean Talon farmers’ market so I could bring some home for myself – because who would believe this, otherwise?)

My stay in Montréal was brief, and only began to scratch the surface of the food scene, but hopefully this will give you a start on exploring some of their restaurants. (And please, let me know if you have any other favourites that I can add to this list, as I know I’ll be going back again soon!) Pin this for your next visit to Montréal!

Special thanks goes to Tourism Montréal who hosted me at Le Blumenthal and Taverne F during my Jazz Festival visit – both were excellent choices.