Railways, Rum Joints and Rhythm: A history of all that Jazz in Montréal You could say that if it hadn’t been for the railway, there might not be an International Jazz Festival today in Montréal.

As a first-time visitor to the International Jazz Festival in Montreal, I was completely ignorant of the history of the jazz scene in Montreal, or even how the black community that spearheaded the popularity of this music genre had arrived here. Lucky for me, Tourisme Montréal had arranged for me to take a ‘Jazz Walking Tour’ to initiate me into the city’s jazz culture. And it all started with a visit to the train station. Walking the Jazz Route in Montreal My tour began at the historic Windsor railway station on Peel Street, the former CPR rail hub built here in 1888, where I met up with Leah Blythe, a bilingual, passionate local guide who researched and developed the route – and the roots – of this jazz tour herself.

As Leah explained, the ‘trajectory of jazz’ began at the beginning of the 20th century with a great migration of African Americans from the south: pushing north in search of a better life, almost two million people left places like New Orleans to head to Chicago, then New York and eventually Montréal. But none of this would have been possible had it not been for the railway. Railways like Canadian Pacific hired black porters to work the trains and the stations, and those porters also helped spread the word that the north offered more opportunity and less discrimination.

Although little remains of the tracks that brought the trains here, and the station itself is no longer used for rail travel, there are still visual clues in Windsor Station that remind us of where the tracks once lay and platforms once stood. Leah also provided a link to the past by bringing out an image of this poster from the early 1920s where you can see the station’s clocks which are still in the central concourse today. Another thing becomes quite clear in this poster, too: although less discriminatory than the American south, the Canadian north had a long way to go when it came to racial equality: you can’t help but notice the faceless, subservient posture of the porter seen here. And you can be sure that the wages these black porters earned were low as well. 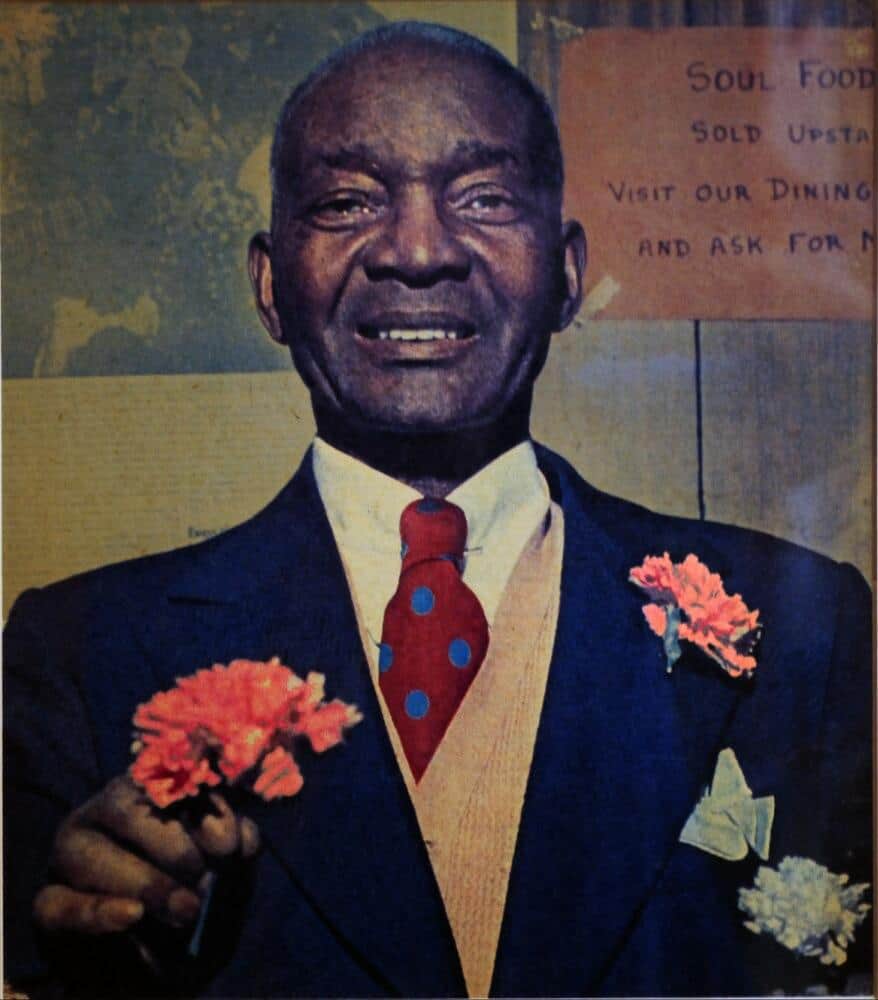 Having lower status and incomes meant blacks lived in neighbourhoods that were often quite literally on the ‘other side of the tracks’, which in Montréal’s case was known as ‘Little Burgundy’. Now an empty lot, the corner on St. Antoine Street was once the heart of the neighbourhood where one of Montréal’s signature jazz venues flourished from the 1920s to the 1950s : Rockhead’s Paradise Cafe.

This jazz cabaret was founded in 1928 by Rufus Rockhead, a Jamaican-born railway porter who opened the club with monies allegedly earned from bootlegging for Al Capone. In its heyday the Paradise hosted the likes of Duke Ellington, Louis Armstrong, Cab Calloway and Billie Holiday. (even for a jazz neophyte like myself, these names are familiar!) Although there is nothing left there now, the club was the centre of black culture and entertainment in Montréal, which drew both blacks and whites to this area and helped popularize the jazz genre in the city. (Watch a short video that shows Rufus Rockhead and the Paradise). Something else drew people (specifically Americans) to Montréal in the 20s, and that something was liquor. When the Prohibition Act of 1920 came into effect south of the border, many American clubs and cabarets were forced to close or go underground. Artists and patrons alike were looking for other options where they could enjoy a little ‘joie de vivre’ (read ‘booze’!). Liberal-minded Montréal beckoned, and many musicians and music-lovers left New York to come north where alcohol was legal, and clubs were thriving. These were the glory days of cabarets in Montréal, and the music scene extended to other parts of the city, including St. Catherine street which became home to dozens of clubs and bars. But then came the 1950s, and Jazz began to take a backseat to new music (swing) that the ‘kids’ were adopting instead. At the same time as music was evolving, television also arrived, which brought entertainment right into people’s living rooms, and signalled the demise of entertainment clubs and cabarets.

Forced to re-invent themselves, many jazz clubs either closed altogether, or became strip clubs, where the remaining musicians who worked there were asked to play sexy, sultry tunes like ‘Harlem Nocturne” to accompany the stripper’s routines.

Chez Parée strip club was once a famous jazz cabaret.

The Return of Jazz in Montréal It wasn’t until the late 70s that jazz saw a resurgence in Montréal, and the first official Festival International de Jazz de Montréal was organized in 1980. (There is some debate about whether the first Jazz Festival was actually the 1979 ‘Le Jazz De Chez Nous’ event put together by Charlie Biddle a year earlier – but being a jazz history newbie, I’m not going to offer any opinion on that!)

Today, Montréal’s International Jazz Festival is the world’s largest of its kind, with over 500 shows (many of which are free) and around 2 million visitors taking them all in every year. During the festival, small venues like the Upstairs Jazz Bar (which is a year-round institution for jazz lovers in the city), bring in international acts for an intimate experience that reflects owner Joel Giberovitch’s vision of what a jazz club should be: music, food, ambience and service.

For a more concert-like experience, huge crowds gather in the city’s entertainment district, the Quartier des Spectacles, where multiple stages play host to the dozens of acts that perform during the Festival. Here, rain or shine, music fans take to the streets, moving from one outdoor stage to the next, and the entire area takes on a rhythm of its own that continues day and night for 10 days. At the centre of all the action is the Maison du Festival, which acts as both press room and museum, hosting media events during the festival and permanent, public exhibitions year-round, ensuring that Jazz has a place in the city beyond just the 10-day festival. Poster of Oscar Peterson in the Maison du Festival Maison du Festival with Jazz artists’ images in the windows I always thought of jazz as either the improvisational-everyone-does-their-own-thing chaos or the sexy-single-vocalist-next-to-a-piano kind of sultry music. But even after only a few days at the Montréal Jazz Festival, I realized that my jazz preconceptions were way too narrow. The Festival welcomes a wide range of artists, and like all music, jazz is constantly evolving, which means there is something here for everyone, whether you are a jazz neophyte or an aficionado.

In recent years the festival has begun to include other genres of music, appealing to the thousands who come for the street party ambiance as much as the artists, but the organizers’ mandate to remain true to their roots means that at least 50% of the acts will always be jazz. One thing I do know, is that if any place can turn me onto jazz, it would be Montréal. Whether it’s the joie de vivre or the joie de musique that has drawn people here for almost a century, this city truly embodies the joie de jazz, and festivals don’t get much better than this.

Special thanks to Tourisme Montréal, who graciously hosted me for my first-ever Jazz Festival.