Portugal’s Algarve coast is arguably one of the most breathtaking stretches of coastline in Europe – so Henk and I absolutely had to see it on our first visit to the country. But ‘seeing the Algarve’ is like saying you want to ‘see the Grand Canyon’ while visiting the States: there are miles and miles of coastline, and only a limited amount of time to explore a small piece of it. Even then, which piece of it should we choose? How about starting with the Algarve’s most beautiful grotto: Benagil sea cave!

Benagil Sea Cave: a Jewel in the Algarve

While doing research online about the Algarve, I stumbled across an image of what I thought was one of the most photogenic locations in Portugal: the Benagil sea cave. Accessible only by sea, with two natural arches and an absolutely stunning ‘skylight’ in its cathedral-like vault, this place seemed like something out of a fantasy movie. So naturally, Henk and I had to see this natural wonder for ourselves, and after tracking down its location, (about 60 km west of Faro, and 8 km east of Carvoeiro), we set our sights on Benagil. The community where the Benagil sea cave is located is almost too small to be called a village, although there is a small beach here (Praia de Benagil) that serves as a base for local boat tours to the cave. You’ll want to rent a car if you’re planning to get to Benagil since this is nowhere near the larger, more developed beach towns along the coast and getting here by public transit is tricky. Yet small as Benagil is, Henk and I were lucky enough to secure a lovely AirBnB apartment not far from the beach, and we made that our base for our 3-day stay in the area.

How to get to Benagil Sea Cave

Discovering where to find Benagil in the Algarve was only half the battle – I wanted to get inside the sea cave itself, and this was only accessible by sea. So after arriving in Benagil, Henk and I went down to the beach, and learned that it was possible to book a boat tour that would drop us off inside the cave for as long as we wanted, with the option to return on a later boat. This meant we could enjoy the cave for hours, lounge on its beach, take as many photos as we wanted and of course, swim in its secluded green waters! The tour itself also included a visit to more than a dozen other grottos and ‘secret beaches’ along the nearby coast, We immediately booked the first boat out the morning after we arrived, and kept our fingers crossed that the weather and the sea would be calm enough to head out. Grottos dot the shoreline near Benagil

Morning dawned calm and clear, so we headed down to the beach, and hopped into our small boat with a few other visitors and set out to explore the coastline, dipping into more than a dozen grottos, passing under enormous eroded arches, and discovering secluded golden sand beaches. 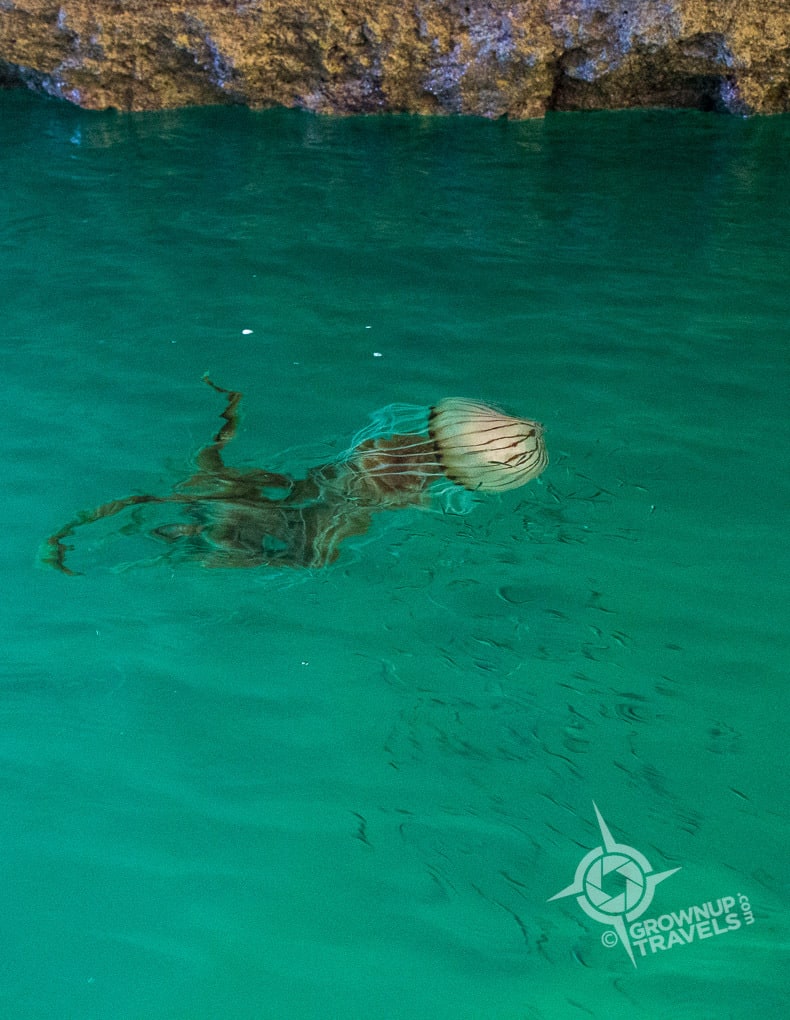 In one grotto, we even spotted a large jellyfish!

Our boat tour turned out to be a wonderful way to see the coastline up close, and get a real feel for this part of Portugal. It was easy to see why the Algarve is considered one of the most picturesque coastlines in all of Europe, but the highlight of our tour was still awaiting, and I was keen to see if Benagil sea cave would live up to my expectations.

What Benagil may have lacked in a village, it more than made up for in its namesake sea cave. The only word to describe this grotto is stunning. You approach the cave through one of two arches carved into the cliffs, with the green of the ocean reflecting on the rock overhead. But then the cave opens up to a massive stone vault where your eyes are Immediately drawn up to a spectacular hole in the stone through which you can see the deep blue of the Algarve sky. This natural ‘skylight’ must be 40 feet across, and like a theatrical stage only Mother Nature could create, the sun streams through its opening, illuminating the sandy beach below in a near-perfect spotlight. Henk and I were understandably stage struck! That’s Henk and I sharing the spotlight in Benagil Cave

Of course, Henk and I didn’t have Benagil entirely to ourselves on the morning we visited the cave, even though we had arrived on the earliest boat we could book – a few intrepid swimmers joined us a little later, having swum a few hundred yards from an adjacent beach. And although it’s not on the well-trod tourist track, there are plenty of locals who know where to find Benagil and a few of them came to enjoy its secluded location while we were there.

Despite the water temperature being a little more refreshing than we expected, Henk and I had to go for a swim (if only for the bragging rights) and to admire the cave from yet another angle. Swimming under Benagil’s skylight was a highlight!

After 2 hours or so of enjoying the beauty of Benagil (and taking a ridiculous number of photos!), Henk and I reluctantly packed up our gear and hitched a ride back on one of the returning tour boats. But we weren’t done with Benagil cave yet…

See Benagil Sea Cave from above

Although you can only get into Benagil cave from the ocean, you can get above it very easily from the shore, and get a birds-eye view of the grotto through its signature skylight. There is a 12-km hiking trail that runs along the top of the cliffs between Praia da Marinha (a beach to the east of Benagil) and the town of Carvoeiro to the west, and actually passes directly over the Benagil cave. Hiking along the cliffs, you’ll see a fenced off opening in the ‘ground’ that is actually the hole in the roof of the cave, and you can look down Into the cave and beach below, giving you another impressive view of this unique natural formation. A fenced-off area identifies the ‘skylight’ of Benagil sea cave Benagil Cave beach, seen from the hiking trail above

It’s always a little risky to arrange any part of your trip around one singular attraction or experience, especially if that experience is weather-dependent,  (like in the case of our boat tour, which required a calm sea). But with something as beautiful as the Benagil sea cave, I was more than willing to carve out a few days in our Portugal itinerary to make sure we had the opportunity to see this spectacular grotto. And I’m so glad we did.

Because as beautiful as the photos of Benagil sea cave may be, they just can’t compare to the experience of actually being there.

TIP: Taruga Tours is located right on Benagil beach and offers 1-hour grotto tours for around 20 Euros per person. For a small surcharge, they’ll do the dropoff/pickup in Benagil cave (best money we ever spent!). Book the first boat out in the morning and you’ll get to enjoy the cave when it’s less busy.