Where to Shop in Perth County, Ontario No weekend getaway to the country is complete without planning a little shopping. At least that’s my philosophy. Whether that means looking for antiques, handicrafts or even local produce, I like to keep an eye out for things you may not find in the big city, or things that might cost a little less by going directly to the source. Henk and I had the chance to explore the area around Stratford, Ontario, recently, so I thought I would share a few tips on where to shop in Perth County, Ontario. (Hint: you might want to bring a truck…) Main Street in Mitchell may be tiny by urban standards, but it contains a real gem: Jillian’s home décor and accessories store. In my mind it ranks right up there with anything you’d find in a city 50 times Mitchell’s size, and I spotted a few things that seriously tempted me to bring out the old credit card. (It was actually a little dangerous just how many things caught my eye.) 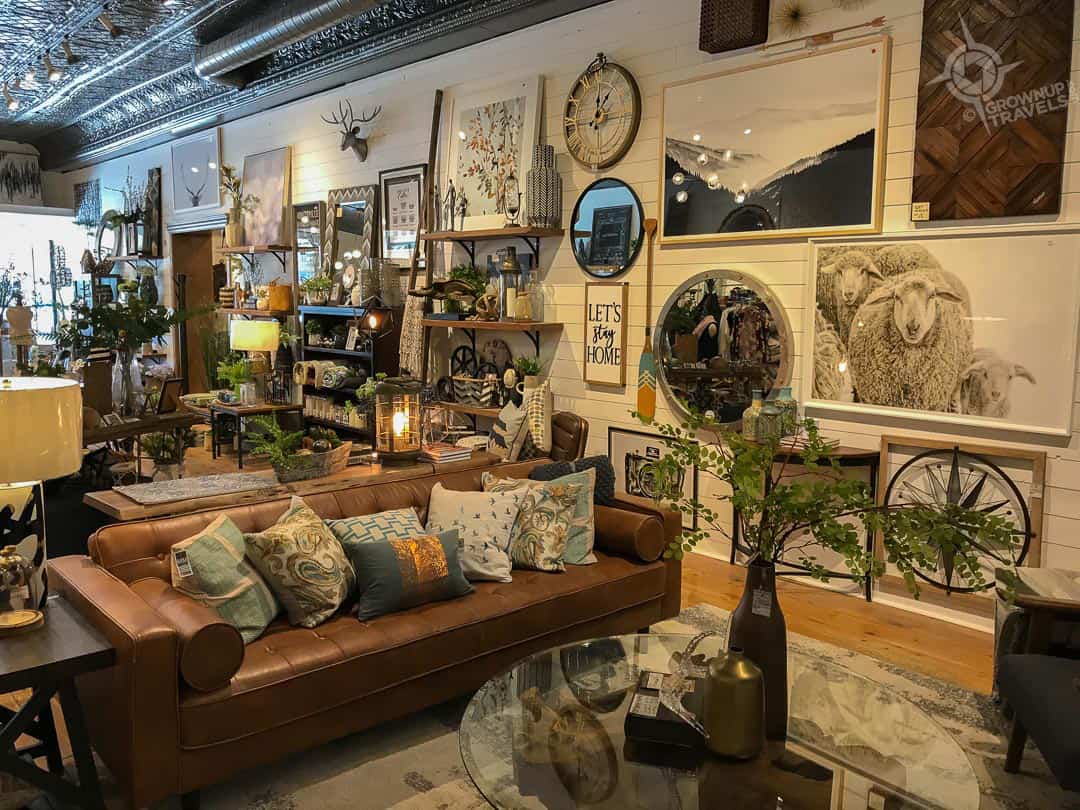 Pretty pottery and other decor accents Something fun and whimsical for a kid’s bedroom If you like the hunt as much as the bargain, you might enjoy poking around in Needful Things. The building was orginally a service station in Mitchell but now serves as a second hand buy-and-sell store. There’s plenty for kitsch-lovers here and now that vinyl is back in fashion, you might even score an LP worth something besides its nostalgic value. Grownups will remember these!

Get Your Antiquing On with Land and Ross Flip Vintage and Antiques in Shakespeare

Shakespeare is exactly the kind of little town that you are hoping to stumble upon when you head out for a drive in the country, especially if you like to do a little antiquing. As Henk and I discovered, Shakespeare is actually Perth County’s antiquing mecca, and I think this tiny stop on the highway probably has more antique stores per capita than any town in Ontario! Check out Flip Vintage & Antiques and Land and Ross Antiques on opposite sides of the main street.

Both shops are owned by the same people who sell everything from architectural salvage and European furniture to folk art oddities like a church-in-a-big-green bottle from Quebec. (I walked away with two nineteenth-century corbeils from an old farmhouse near London that Henk is still shaking his head over.)

A rare church-in-a-bottle from Quebec Bacon and More at The Little Pork Shoppe

If you like to know where your meat comes from (and I don’t mean Loblaws), bring a cooler in the car and hit up The Best Little Little Pork Shoppe just on the edge of Shakespeare.

The Best Little Pork Shopper has been in Shakespeare for 30 years and sources all their meats from local producers. With the vast majority of their customers coming from Toronto, people obviously are willing to drive for good pork! There are also plenty of other local products you can buy here, too, but it’s really all about the pig, (and judging by the bacon that we sampled one morning, I’d have to agree. Mmmmmm…..bacon….)

TIP: The fridges get restocked on Tuesdays, so time your shopping visit around that schedule if you want the biggest selection.

Dublin Mercantile: Come In and Get Lost Blink and you might miss the small town of Dublin, but surprisingly, this little street has a surprisingly abundant offering when it comes to items for the home. The Dublin Mercantile is a deceptively small storefront that belies the neverending series of rooms behind it. Just when you think you’ve explored all that this rabbit warren of connected rooms has to offer, you find another doorway that leads to several more rooms. Each of Dublin Mercantile’s rooms sells different categories of items

Goettler’s: 3 Generations of a Furniture Family

Across the street is Goettler’s Furniture, practically an Ontario institution when it comes to furniture. The Goettler family has been here for generations (we met grandson Steven), and they have specialized in furniture for the home since, well, forever. The store is actually two historic buildings that have been opened up to expand to a 10,000 square foot showroom, part of which used to be a dance hall back in the 1940s. Goettler’s Furniture has been in Dublin for 3 generations

Goettler’s is a destination for folks from all over southern Ontario,with something here for every taste from solid wood pieces crafted in Quebec to contemporary pieces that would look good in any condo. (You’ll just need to bring a truck if you want to take it home with you and not wait for delivery!)

Sometimes It’s the Hunt, Not the Bargain

Discovering where to shop in Perth County, Ontario is sometimes less about finding a deal and more about just driving around and enjoying the hunt. Whether it’s finding a hidden gem of a contemporary decor store where you least expect it, antiques that you didn’t know you wanted until you did, or locally-produced produce and foodstuffs, shopping in the country is always a little bit of a you’ll-know-it-when-you-see-it kind of adventure. This one-horsepower beauty is for sale…antique buggy anyone?

Special thanks to Perth County Tourism who hosted our weekend stay in the area and gave Jane the excuse to go shopping!