For most people living in southern Ontario, this year will go down in the books as “The Winter that Wasn’t”, an entire season almost devoid of snow and particularly unkind to those who love skiing and snowmobiling. But even with this unseasonably warm weather, Henk and I still managed to get out to enjoy some of what winter has to offer at Viamede Resort in the Kawartha Lakes district – including a snowshoe trek through the resort’s 165 acres that was nothing short of magical.

Two days before we arrived at Viamede Resort, Mother Nature had delivered an ice storm to the region, followed by a few inches of fluffy new snow. Fortunately for us, the day we drove up, the skies were clear and the roads were a dream to drive. In fact, less than half an hour from our destination, we were given a wonderful surprise: the late afternoon sun broke through some clouds, backlighting the trees on either side of the highway, and literally causing me to gasp. Every twig of every tree was encased in sparkling ice Every twig and branch of every tree and shrub was completely encased in ice, and with the sun lighting them up, they glittered like they were decked out in diamonds. “Wow!” was all I kept saying over and over again, as I spotted a row of trees on top of a hill that sparkled like they were lit up for Christmas. Down another dip, and there was an ice-encrusted fence dripping with sparkling icicles. There were even frozen bullrushes by the side of the road, waving in the breeze with the sun behind them – looking like Nature’s version of a popsicle. It was something that belonged in a fairy-tale winter wonderland and we drank it all in, knowing it couldn’t last for long.

It was an auspicious start to our winter weekend at Viamede, and we were excited to see what else was in store for us.

A storied resort on 165 acres of forest Viamede has a history that goes back generations

Perched on the shores of Stoney Lake, with a history dating back more than a century, Viamede Resort holds a premium position in the cottage country of the Kawartha Lakes region. As every cottager knows, waterfront footage is golden, and Viamede has that in spades. And with 165 acres of forested trails extending back from that coveted shoreline, staying here means taking advantage of all that nature offers, and getting outside into those Great Outdoors, whatever the season.

Snowshoe with deer in a glittering forest Snowshoeing with deer on the Deer Trail at Viamede

Although there are always snowshoes available for guests at the resort (Viamede offers all kinds of equipment at no charge so guests can enjoy whatever activity they prefer), Henk and I had brought our new snowshoes along with us so we could break them in on the resort’s trails. Carly at the front desk suggested we try the Deer Trail loop (about an hour or so long), where it’s not uncommon to see deer while hiking.

Luck really was on our side this weekend, because no sooner had we geared up, than the sun broke through what had been an overcast sky, revealing a bright blue sky and unspoiled trails marked only with the tracks of deer. LOTS of deer! Everywhere we looked we spotted deer runs in the snow, or rabbit tracks, and we weren’t on the trail for 20 minutes when I spotted 3 adult deer running through the trees on the top of a nearby ridge. I was so excited that I started out after them, but soon realized that a) I would never catch them and b) it might be a better idea to stick to the well-marked trails versus going rogue. Deer tracks were everywhere in the new snow on the trails

As if spotting deer wasn’t enough of a reward, there was more magic in store. Looking up we realized that here, too, the trees had held onto their sparkling ice coating from the recent storm, and the canopy above our heads sparkled and shone like jewels, just like the evening we drove up. What more could you ask for in a hike! The sun made every frozen droplet sparkle It felt like Henk and I were snowshoeing in a diamond forest! Trying my hand – and feet- at skijoring with Daisy

Leave it to the inventive folks in Scandinavia to figure out a winter sport that involves a dog, a harness, and cross-country skies – something called skijoring. And then count on Canadians to try it!

Viamede Resort may be the only place in Ontario that offers guests the chance to try out skijoring for themselves, with the help of Daisy and Toby, Viamede’s resident Golden Retrievers. If you can’t have fun with something like skijoring (start by pronouncing it like the Swedish chef from the Muppets!), you’re missing the point. So I slapped on the cross-country skies and did a circuit around the rink close to the shore, managing not to embarrass myself too badly.

Skate on a frozen lake Of course, if hockey or skating is more your thing, there’s an ice rink just waiting for you on the frozen lake where you can get your Wayne Gretzky on, or maybe try a triple toe loop. It doesn’t get more Canadian than a hockey rink on a frozen lake.

Enjoy the Great Indoors, too. Viamede’s indoor outdoor pool has a fireplace, sauna and a view!

Of course, winter fun doesn’t all have to happen outside at Viamede Resort. A brand new pool/sauna/fitness centre just opened for 2016, and features a heated indoor-outdoor pool where you can either swim inside and admire the winter landscape from behind the floor-to-ceiling windows, or swim through the opening into the outdoor pool area and get a little fresh winter air on your face. (I forgot my bathing suit, or I’d have been in that indoor/outdoor pool in a heartbeat!)

Evenings call for serious grownup time at Viamede – starting with a reservation at the Mount Julian restaurant, located just a few steps from the main building in a charming converted inn that has been a part of Stoney Lake since it was built in 1874. 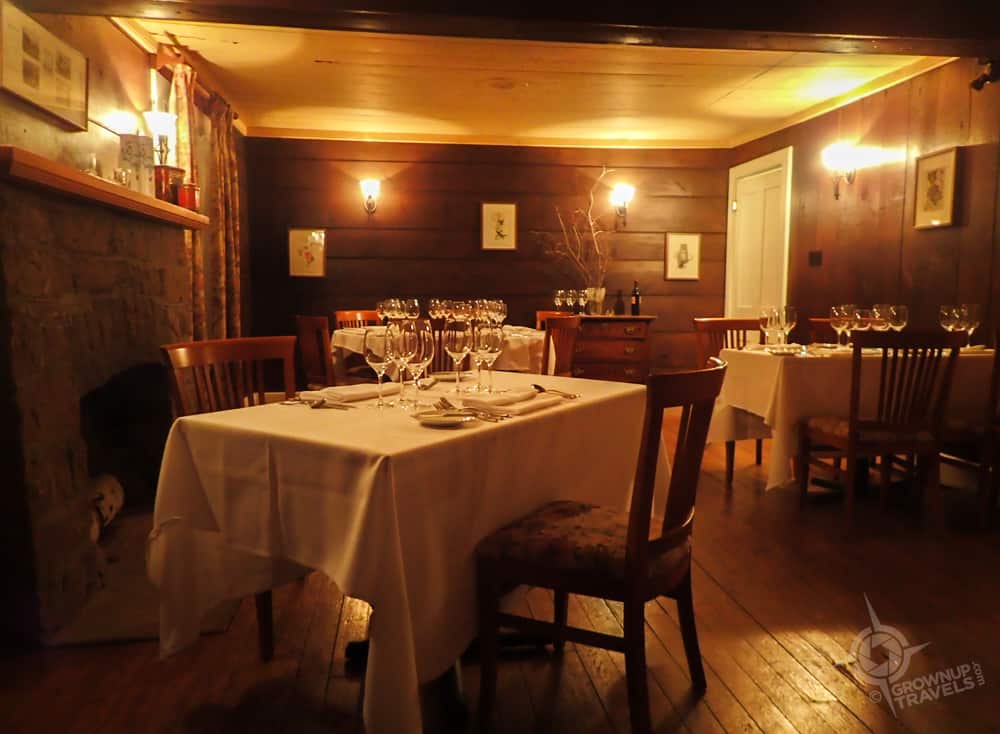 Helmed by Chef Kevin McKenna, whose resume includes tenures at Fat Duck, and Le Manoir aux Quat’Saisons in England, Mount Julian restaurant is a hidden gastronomic gem in the region and the pride and joy of Viamede’s owner, Ben Sâmann. Ben’s passion, like Chef McKenna’s, is to deliver an unparalleled dining experience, and that includes a farm-and-forest-to-table philosophy that results in imaginative 5, 7 and 9-course tasting menus. (Read my experience describing my 10-course extravaganza!) You will definitely want to take advantage of the opportunity to dine here during your stay at Viamede. Pappardelle with porcini and yellow foot mushrooms: A smal taste of what I enjoyed at Chef McKenna’s 9-course tasting menu

Wintertime is time to chill Winter sunsets can be even more beautiful on a frozen lake

Whatever gets your cheeks rosy (all the fresh air, activity – or wine pairings at Mount Julian!), a winter getaway wouldn’t be complete without a little down time to just settle in and relax, whether that’s watching the sun set from one of the main building’s lakefront rooms, or curling up in front of your own wood-burning fireplace in one of the Hilltop rooms. At Viamede, the priority is to deliver exactly this kind of cottage experience, not over-the-top luxury. So if you are expecting The W’s bleeding edge design, or the Four Season’s butler service, adjust your expectations. Here, it’s about enjoying the best that Ontario’s ‘four seasons’ have to offer.

So collect some logs from the resort’s woodshed, open a bottle of full-bodied red and snuggle up for a good old-fashioned winter’s night in.

TIP: For more information on accommodations, activities and special packages for every season, visit www.viamede.com. Viamede Resort is located approximately 2 hours northeast from Toronto, depending on traffic (which can get quite heavy in the summer months) – making winter an even better time to visit while most of the summer cottagers are off the highway!

Special thanks to Viamede resort, its staff, and especially Owner and General Manager, Ben Sâmaan, for hosting our weekend.