5 ‘Grownup’ Things to do on a Midland, Michigan Getaway I’m probably as guilty as the next person of stereotyping when it comes to certain destinations. Because up until a couple of weeks ago, I would have painted the entire state of Michigan with the same black brush Henry Ford used to paint his Model T’s. And if you had asked me where to go to experience iconic architecture, art museums, beer and wine tasting, returning each night to a chic boutique hotel worthy of a California zip code, not a midwestern one, I would never have said go to Michigan’s Great Lakes Bay region. I’d have been very, very wrong.

If short-stay getaways are your thing, you’re in for a treat when you visit this area. Because although their size might be deceiving, the towns of Midland, Saginaw, Bay City and yes, even Frankenmuth, Michigan’s “Bavarian Christmas village”, offer more cultural attractions than you might think. Here are 5 ‘grownup’ things to do in Midland, Michigan, no matter what you’re looking for.

If you’re a fan of Frank Lloyd Wright, then you should put Midland on your list of destinations worth visiting, in this case, not to visit a home designed by FLW himself, but rather by one of his students, Alden Dow. The son of Dow Chemical’s founder, Herbert Henry Dow, young Alden realized early on in his academic career that he was not cut out to be the chemist his father was, and instead was encouraged by Herbert to follow his passion for architecture (pretty progressive thinking on the part of Dad, given that this was in the 1930s). Alden was exposed to even more progressive thinking when he visited Talieson West in Arizona and soon became one of Frank Lloyd Wright’s original fellows. So it should come as no surprise that the home and architecture studio that Alden built back in Midland is a stunning example of that modernist aesthetic. 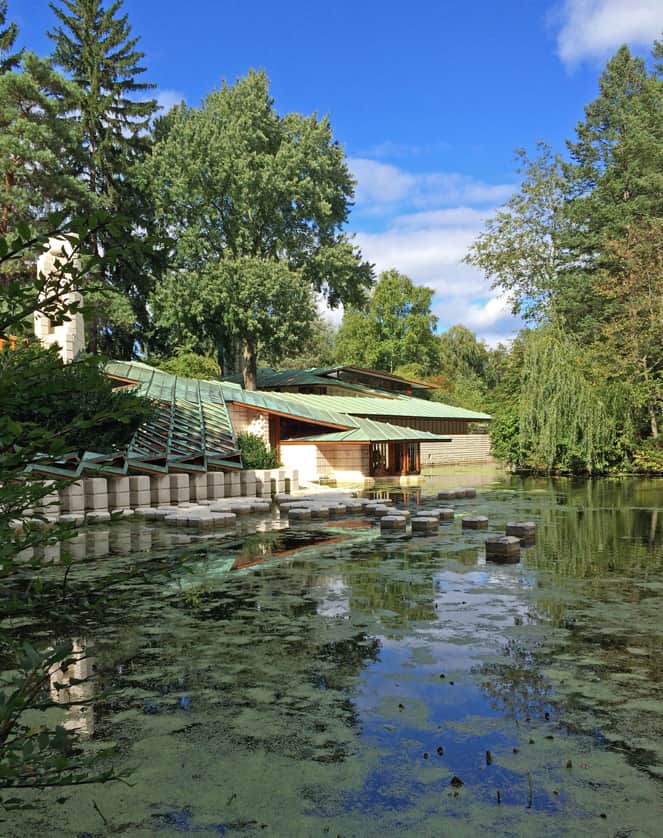 Beautifully nestled in a pine forest adjacent to Dow Gardens, where the original Dow family home still sits a few hundred yards away, the Alden Dow home appears quite unassuming with its low profile and algae-covered pond surrounding it. But once inside, the home expands to a surprising 20,000 square feet of interior space, and you are led from one space to another using a familiar ‘compression’ device made famous by Wright in other houses like Fallingwater in Pennsylvania. (Wright would create low-ceilinged spaces at entrances and in hallways which psychologically ‘encouraged’ the visitor to move through the space to more expansive surroundings.) But unlike Fallingwater, visitors at Alden’s house in Midland are actually encouraged to sit on the furniture, and wander through the rooms of the home, which makes for a more touchy-feely experience than at other FLW museum homes.

But the part I loved best about the house was the ‘Submarine Room’, which Alden used to meet with clients. The room is surrounded by the exterior pond, and in fact the floor of the room sits about 18 inches below its surface, giving the impression that you really are part of the exterior even though you are inside the home. Definitely a must-do for architecture buffs. A centrepiece in any town, the courthouse usually carries with it a certain air of solemnity and formality. But what’s interesting about the 1925 Midland Courthouse is the informality of it – and the role it plays as a 3-D canvas for murals that decorate its exterior. Painted by Detroit artist Paul Honore, the murals reflect the history of the region, including images of Native Americans, early settlers, and pine trees that are reminiscent of Tom Thomson and the Group of Seven. Local farmers were encouraged to contribute stones from their property to be used in the Courthouse’s construction. Pine trees on the sides of the Midland Courthouse I’d never seen a 3-way bridge in my life, and didn’t know they even existed, until I went to Midland. There are only a handful of these types of bridges around the world, and they are unique in that 3 distinct spans cross 2 bodies of water, giving access in either direction to all points of land via their unique centre point hub. Here in Midland, the ‘Tridge’ is part of the city’s extensive park and trail system, spanning the forks of the Chippewa and Tittabawassee Rivers, and used by bikers and hikers all year long to travel from one part of the trail to another, or to the downtown core – making the Tridge not just pretty to photograph, but also really functional. You’ll need a wide-angle lens to capture all three spans of the Tridge.

2. Looking for Art? See some in Saginaw.

If you love sculpture that is both modern and traditionally-inspired, plan a visit to the Marshall M. Fredericks Sculpture Museum on the grounds of Saginaw Valley State University. Although small, the main gallery is beautifully designed with its floor-to-coffered ceiling windows soaring 20 feet or so high, illuminating a room full of white plaster pieces of impressive scale and beauty.

Fredericks’ sculptures: from the charming (Aesop’s Lion and Mouse in the foreground) to the revered (Christ on the Cross which was cast in bronze and placed on a 55-foot cross at the Indian River Catholic Shrine)

There’s also an interesting studio ‘set’ that replicates Fredericks’ workshop and is used to explain the techniques and processes for enlarging and casting his plaster models into the finished bronzes you can see on the University grounds and elsewhere in the States. A sampling of other artworks are also on display, but the feature is clearly the sculpture gallery.

We also paid a short visit to the recently renovated Saginaw Art Museum where a  juried fabric art exhibit, What a Stitch, was just closing, but we were fortunate enough to see a few works by some of the show’s artists, including the winner, Deb Hyde, who had taken top honours at the show. The detail and design in her quilting was incredible and the results were beautiful. Being someone who can barely sew on a button, I am always blown away by this kind of talent with textiles. Winning artist Deb Hyde had several pieces in the show. Detail of the quilting craftsmanship

3. Looking for a drink? Go wine-tasting in Frankenmuth! If Christmas Kitsch isn’t your thing, and roast chicken served by waiters in Lederhosen doesn’t tempt your palate, don’t write off Frankenmuth from your places to visit. St. Julian Winery offers tastes of local Michigan wines (who knew Michigan has a wine region!) and there’s a lovely grownup wine bar and bistro, Prost, that just opened this summer where hand-cured charcuterie and equally delicious wines will take the edge off all that Holly Jolly-ness.

If beer is more your thing, like it is Henk’s, the Frankenmuth Brewery should not be missed. Not only is it one of the 5 oldest breweries in the entire country, it follows the strict Bavarian purity law of using only 4 ingredients when it brews its German-inspired ales. Tastings are as good as the burgers they serve on their menu, and in true German tradition, both are more than ample! As a cross-border shopper who often dips across the Rainbow Bridge into Niagara Falls, NY, looking for a deal, I’m always on the lookout for a good outlet mall, and Birch Run Premium Outlets, a stone’s throw from Frankenmuth, is a good-sized one. In fact, that’s the one problem with it – you’ll need your walking shoes to take it all in, and because it consists of groups of smaller buildings spread out on the ‘campus’, a lot of that walking will be outdoors. But where there’s a deal, there’s a way, and if you’re over 50, go on a Tuesday to get an extra 10% off at select stores. Being a grownup has its rewards! Tell me this doesn’t look like a hospital entrance!

All this art, shopping and drinking can be exhausting, so why not treat yourself to a little bit of genuine luxury in the centre of it all? I first thought that the H Hotel in Midland must have once been a hospital, not just from the ‘H’ used as its logo, but from the exterior of the building whose portico looks like the Emergency Room drive-up.

But don’t be misled – walk through the doors and you are transported into a chic world of white that could easily take its place in South Beach or Los Angeles. The ‘H’, as it turns out, refers not to gurneys and hospital gowns, but to Hydrogen, the first element from the periodic table of the elements. And they really do get every element right here, from the boutique-chic decor to the attentive service from the main desk, to the casual dining at Cafe Zinc (spelled like the hotel, using the chemical symbols, Ca Fe Zn).

Definitely have breakfast or brunch at Cafe Zinc, as even an unassuming cup of tea is a beautiful and well-crafted experience in this bistro. And the best part of all? It’s half the price of a Holiday Inn in NYC! This is what greets you at the entrance to the ‘H’. White, yes; clinical, no. If that isn’t enough to justify a little pampering, the H hotel couldn’t be better situated, with the Courthouse right next door, the Tridge just across the park behind the hotel, and Dow Gardens only a short drive away. Dow Gardens is a great place for a peaceful walk.

When it comes to Grownup Getaways, the Great Lakes Bay region delivered more than I would have expected – the exact opposite of ‘Henry Ford Black’, this part of Michigan turned out to be as colourful, cultured and varied as the thousands of flowers on Midland’s Dahlia Hill.

Dahlia Hill displays hundreds of varieties of dahlias on tiered beds you can walk through.

Special thanks to the Great Lakes Bay Regional CVB who hosted me for 4 days to tour the area.