Cuba Beyond the Beaches: Historic Towns of Remedios and Sagua la Grande White sands, mangroves, tropical breezes and a never-ending supply of rum-based cocktails. If this is the image that comes to mind when you think of the keys just off Cuba’s northern coast, it’s a pretty good one, and one that tens of thousands of Canadian visitors experience every year. But the 5-star all-inclusive resorts that have lured travellers to Cayo Santa Maria, Cayo Ensenachos and Cayo Las Brujas are only a small part of what Cuba has to offer, and don’t even begin to scratch the surface of this country’s incredible culture. For that, you’ll need to go beyond the beaches. Fortunately, there are easy day trips from Cayo Santa Maria to the historic towns of Remedios and Sagua la Grande, two of the area’s most colourful and characteristic towns. The pretty main square in Remedios

Many visitors are familiar with Cuba’s photogenic capital city, Havana (which will be celebrating its 500th anniversary in 2019), but there are even older cities in Cuba that are not on most visitor’s radar, yet have small-town charm and a more intimate vibe that makes them well worth visiting. Remedios is one of these, a colonial town in the north-central province of Villa Clara which is celebrating its 500th anniversary this year. (and is marking the event with the launch of 1,000 bottles of limited edition rum selling for about $300 each – rum connoisseurs take note!) However its special-edition rum is not what sets Remedios apart from other towns in Cuba: architecturally, the town reflects the design of many Spanish colonial towns in Central and South America, with a pretty central square boasting a neo-classical church that is surrounded by colourful buildings operating as cafes and restaurants. But Remedios is unique for several reasons: not only is their Iglesia de San Juan Bautista the oldest church in Cuba (dating back to 1570), but Remedios is the only town to boast two churches in its main plaza.

The larger San Juan Bautista church steals most of the glory with its size and the 13 elaborately gilt altars within, golden details that were concealed for generations under layers of white paint and only came to light during a restoration in 1944-54. It seems that historically, Remedios was a favourite target for pirates so the gold decoration on its interior was concealed from view in order to protect the altars from being looted. But why two churches in Remedios?

The Iglesia de Nuestra Señora del Buen Viajes, the second church in the opposite corner of the main square may not have the golden altars of its larger neighbour, but it does have a more romantic story all its own… Legend has it that local fishermen from the nearby northern coast discovered a floating box in the sea containing a carved statue of the Virgin Mary, and after safely returning to shore with it, the fishermen named the statue the Virgin of Good Travel (Buen Viaje). They then packed the statue onto a mule to transport it to the San Juan Bautista church in Remedios. But before reaching the church, the mule carrying the statue stopped and refused to walk further, causing the statue to fall to the ground near the home of a paralyzed former slave. The slave offered to look after the statue until he could send word to the priest to come and fetch it. 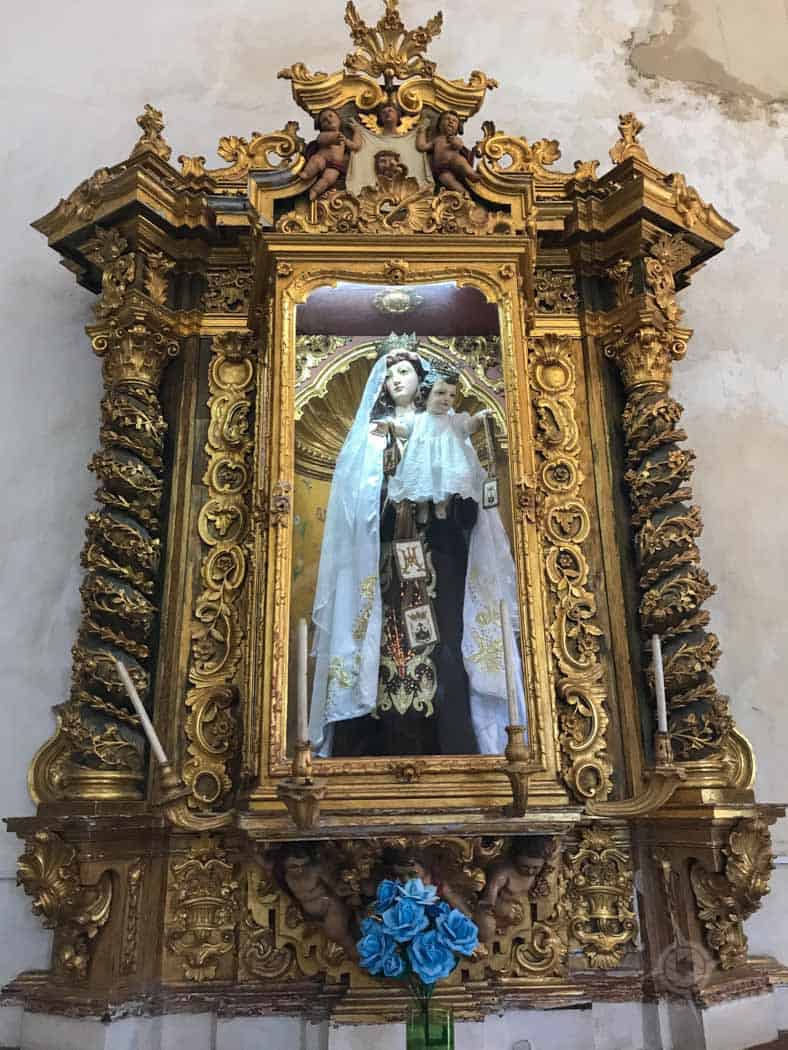 The original statue of the Buen Viajes virgin was lost when a fire destroyed the church in 1862, but there are plenty of others in Remedios.

Religion also played a role in Remedios’ most famous festival, the Las Parrandas de Remedios, a carnival-style outdoor street party held every year the week before Christmas. Its origin dates back to 1800 when a priest organized the town’s children and had them visit different neighbourhoods singing and making loud noises to wake people so they would attend Midnight Mass. Whether this tactic succeeded in filling the pews is unknown. What is known, however, is that today, everyone in Remedios is awake around the clock on Christmas Eve thanks to the town’s dusk-to-dawn party featuring music, light installations, dancing, food and [very] loud fireworks displays. 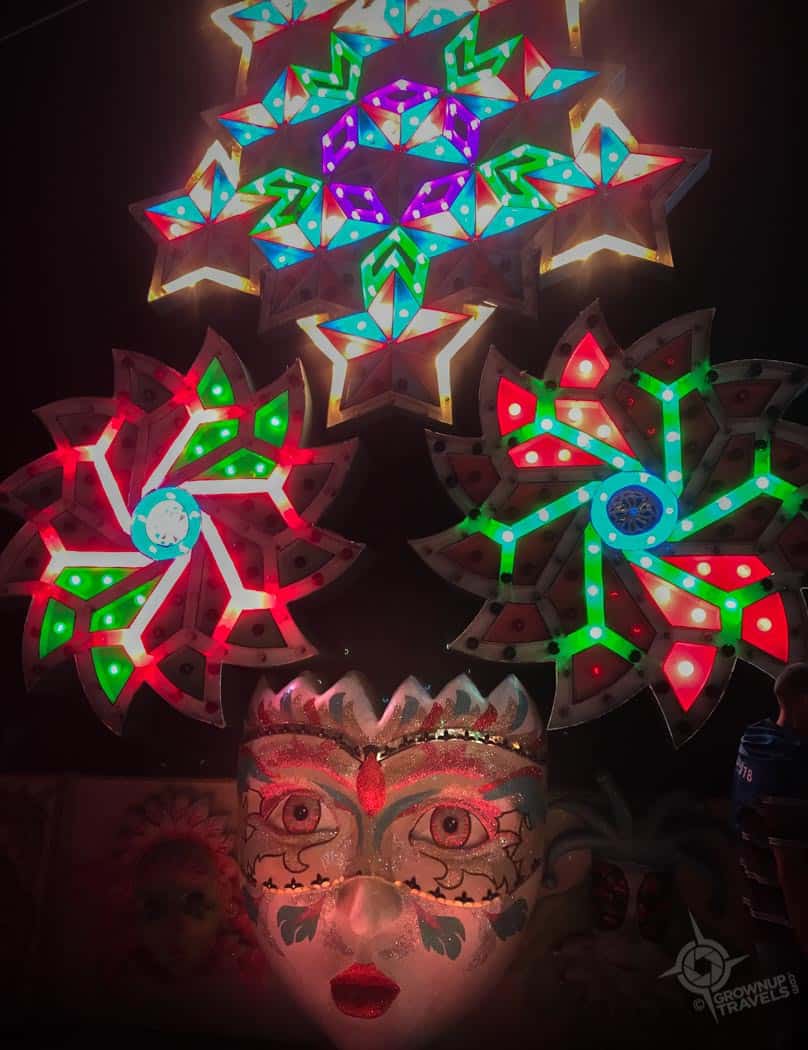 Thousands of Cubans flock to Remedios for this annual festival and to witness an historic competition between two rival neighbourhoods, San Salvador and El Carmen. Each neighbourhood works for months in secret to construct elaborately decorated floats which are paraded around the town in the wee hours of Christmas Eve/Morning. Equally elaborate and beautiful are the costumes for the event, and it’s a serious matter as to who wins the title. There’s even a dedicated museum in town with photos from past festivals. 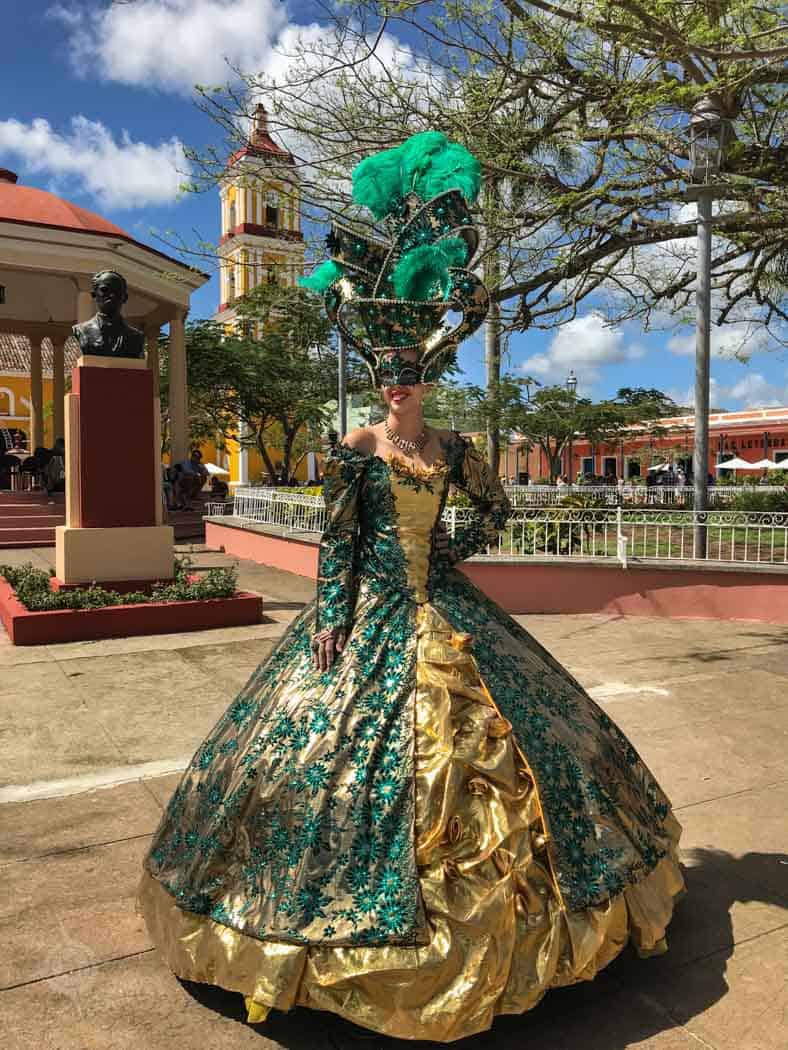 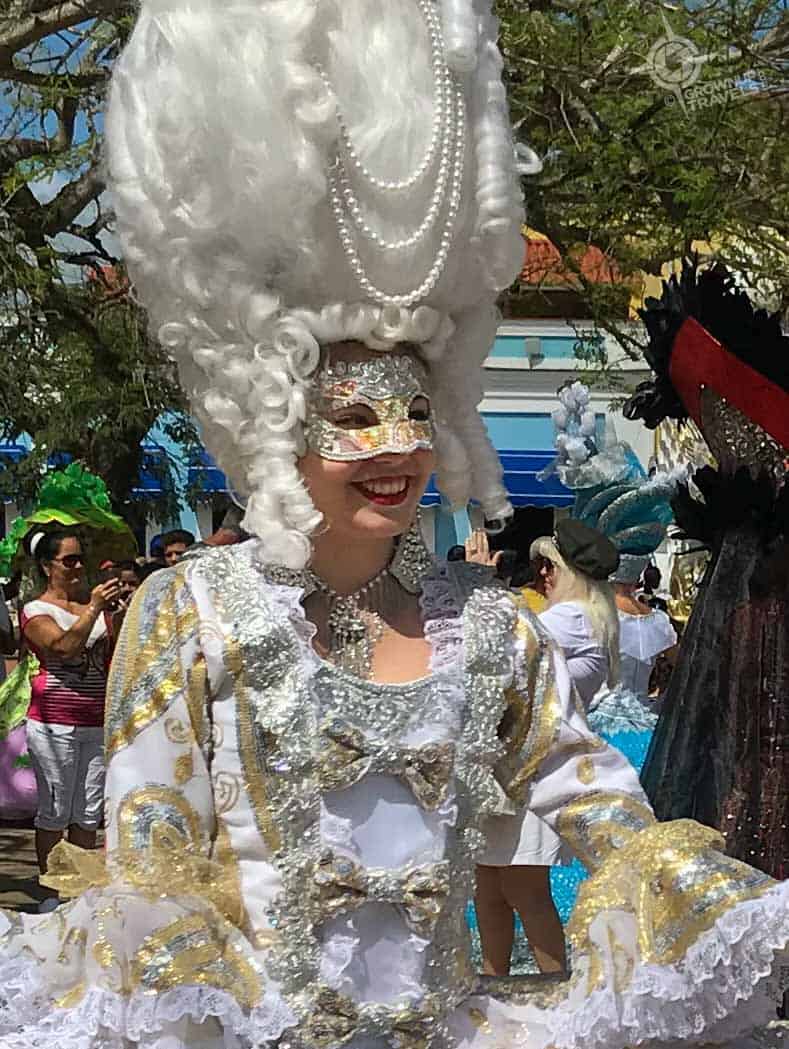 Elaborate costumes were on display for our visit to Remedios

For visitors wanting to celebrate the season with a party that is decidedly local (and a little ‘loco’!), Las Parrandas de Remedios is THE Christmas festival to be at in Cuba.

TIP: If you are visiting Cuba during Christmas and are thinking of going to Remedios, accommodations are scarce during the festival so you’ll want to book well in advance. Sagua la Grande is one of Cuba’s off-the-tourist-radar towns that is experiencing a mini-renaissance, thanks to the government designating it a National Monument in 2011 and investing considerable funds in restoring its historic buildings. Architecturally significant with hundreds of buildings designated as protected, two of the town’s most important hotels have been recently restored and returned to their former grandeur, but with modern amenities and features better suited for today’s visitors.

Completely refurbished as a boutique hotel, the Palacio Arenas was originally built in 1918 and has an exotic vibe with arabesque windows, ornate balustrades and ridiculously high ceilings in its guest rooms and common spaces. Palacio Arenas has an exotic feel with its decorative windows The larger Hotel Sagua has been a landmark in Sagua la Grande since its construction in the 1920s when it was considered one of Cuba’s most luxurious hotels. Happily, it is once again a beautiful landmark, having been restored to its former glory from what was essentially a ruin. It was officially opened in May 2018 and now also boasts a beautiful rooftop terrace with panoramic views of the town. Art in the Heart of Sagua La Grande

Like Remedios, Sagua la Grande’s main square is the heart of the town where people gather to socialize and where you’re likely to find local artists showcasing some of their work (and thankfully not just paintings of old American cars, a souvenir staple in some of the more touristy cities in Cuba). I met one young artist, Orlando Paredes Reyes, whose current work takes its inspiration from distressed ships, which he brings to life in both paint and multi-media sculptures made from a combination of ceramic and reclaimed materials. 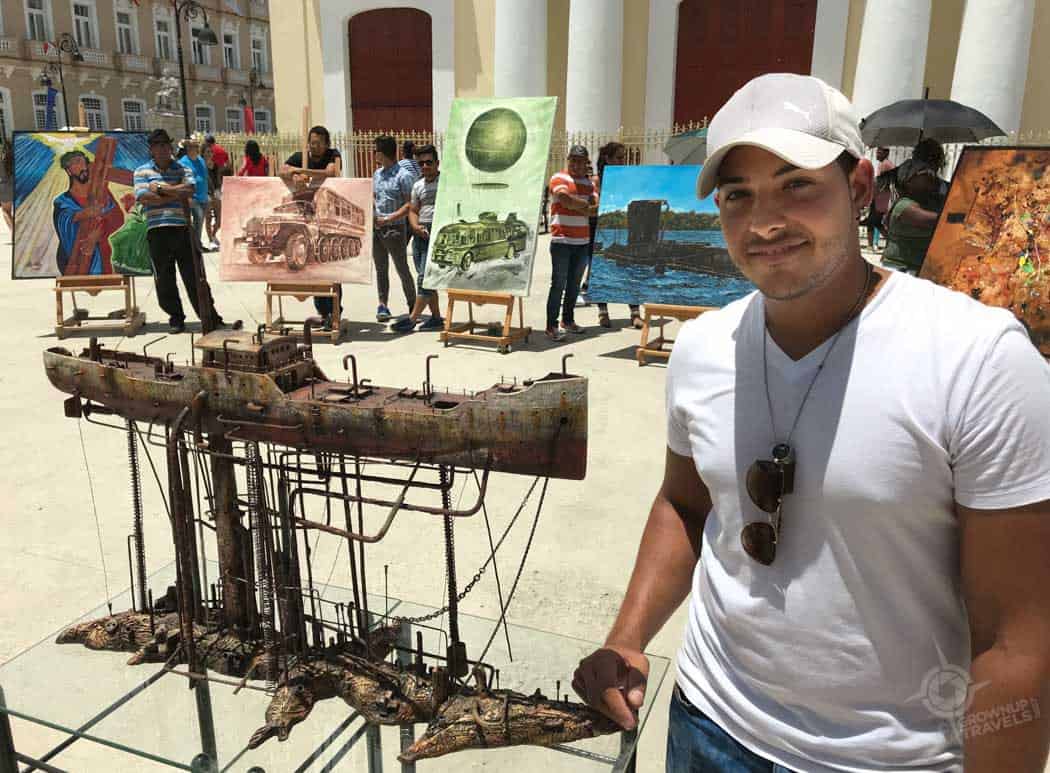 Artist Orlando Paredes Reyes with one of his sculptures

Sagua La Grande which has been home to many artists over the years, the most famous of which was Wifredo Lam, a Cuban artist of Chinese and Congolese descent who was born here here and whose art was influenced by the Afro-Cuban culture in which he grew up. Many of his works reflect elements from the mysterious Santeria religious practices that blend Christianity with African spirituality and pagan rituals. Although Lam later moved to Europe and Havana to study and work, he is perhaps the town’s most famous son, and his humble wooden home is a stop for many admirers. 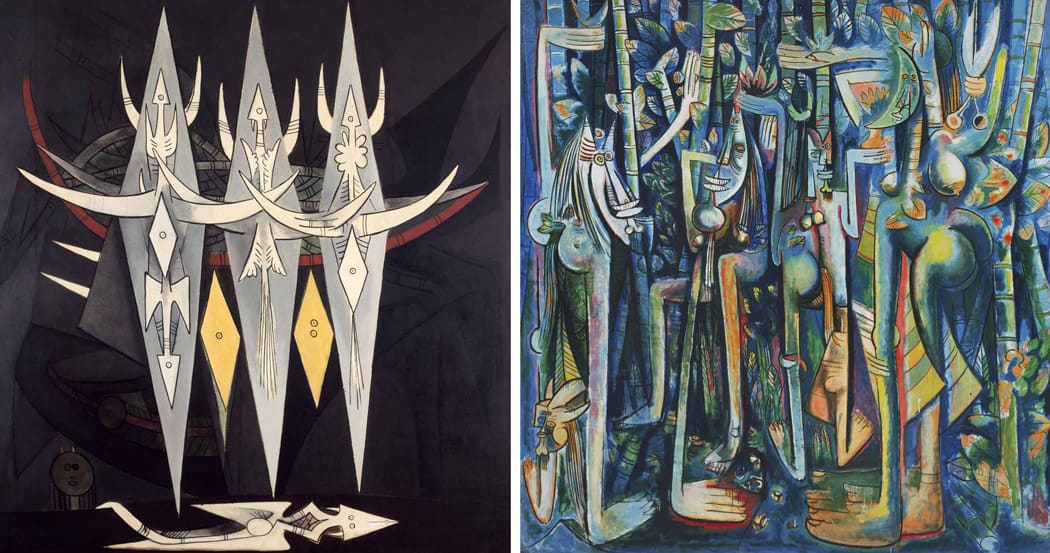 Of course if you do want to see those old American cars that Cuba is known for, and not just on a souvenir painting, take a stroll down one of Sagua La Grande’s streets and you’ll see vintage cars and even buses that people still use to get around. Sagua la Grande has its share of vintage vehicles

Ready to Venture Beyond Cuba’s Beaches?

There’s no denying that Cuba’s beautiful beaches are hard to resist, but if you’ve already been to several and are looking to discover more of what this country has to offer on your next visit, look beyond the white sands and turquoise waters and explore the colourful towns of Remedies or Sagua la Grande, two of Cuba’s undiscovered towns that are as yet unspoiled by tourism. TIP: Remedios and Sagua la Grande are easy day-trips from the resorts on Cayos Santa Maria, Ensenachos and las Brujas. But for a more relaxed and immersive local experience, I would recommend spending a night or two in one of the towns.

Special thanks to the Canadian office of Cuba’s Ministry of Tourism who invited me to FITCuba2018,( their annual tourism fair) and who introduced me to these historic towns and a Cuba that I had never seen!