6 Reasons to Visit Ottawa NOT just on Canada Day It’s almost embarrassing to admit that even though I live less than 5 hours from my own country’s capital city, it’s been over thirty years since I visited Ottawa. More embarrassing still is that the only thing I remember about my visit was a university Purple Jesus Party (you remember those!) and a skate on the canal that almost made me late for my bus ride back home.

This neglect of Ottawa was a shame, because after visiting the city recently, essentially for the first time, I realized just what I’ve been missing. In fact, I can think of at least 6 reasons why I would recommend Ottawa as a destination anytime during the year, and not just on Canada Day (regardless of whether you are Canadian or not). A unique view of the Parliamentary Library from the Peace Tower

Whether you are a history buff, a student of art or architecture, or just a fan hoping to catch of glimpse of Canada’s personable Prime Minister, a visit to the Centre Block of the Parliament Hill buildings is a must-do for any visitor to Ottawa.

Henk and I booked one of the free tours that took us around to view some of Parliament Hill’s most celebrated rooms, including the House of Commons, the Parliamentary Library (one of the few structures that was undamaged in the 1916 fire that destroyed most of the Centre Block) and of course the Peace Tower where you get an impressive 360-degree view of the city. Inside the circular Parliamentary Library 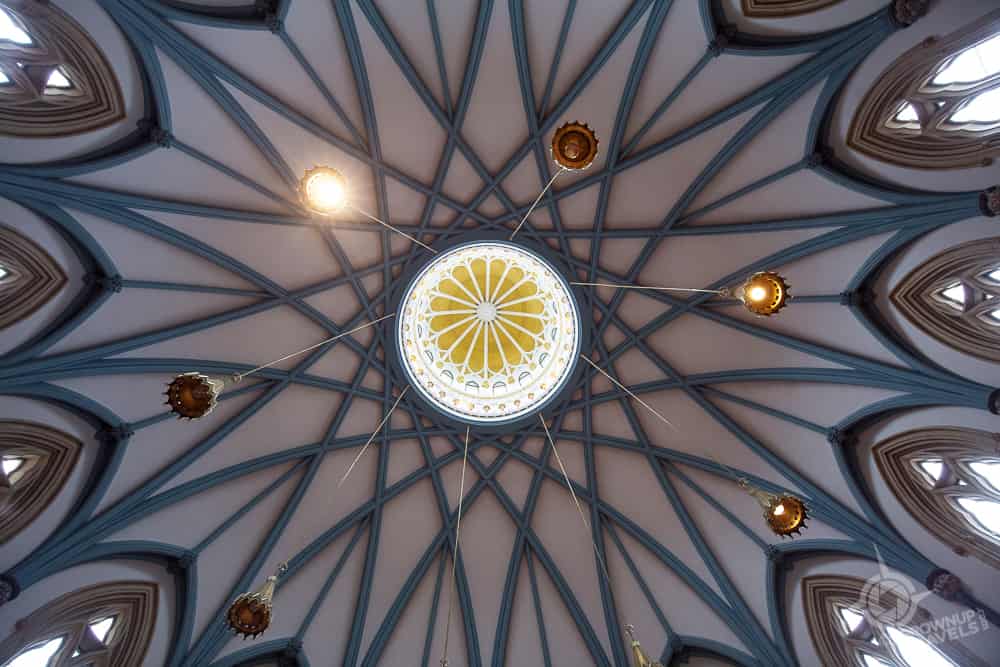 Looking up at the dome in the Parliamentary Library Not only are the Parliament buildings themselves beautiful, with their neo-Gothic arches, stone gargoyles and impressive Tower, but there is something about visiting the seat of power in your own country that brings out our normally well-hidden Canadian Pride. And speaking of seats, if none of these lofty reasons inspire you to visit, there’s always Parliament Hill Yoga happening on the front lawn every Wednesday at noon during the summer (where you can “pay tribute” to the elected officials in a completely different way!) TIPS: The Centre Block is scheduled to close (likely Fall of 2018) for 10 YEARS to undergo a major restoration, so now is a good time to visit before the Centre Block is closed and the House of Commons moves to temporary quarters in the West Block.
Until then, free tours are available to any visitor, but tickets can only be reserved in person on the same day you want to visit. Be at 90 Wellington Street before 9am as spots fill up quickly. Canadian Museum of Nature, Ottawa, with its giant inflatable jellyfish

Like other museums in the capital, this year’s celebrations have inspired the opening of new galleries, and the Canadian Museum of Nature is no exception. Their new Arctic Gallery is scheduled to open in late June and promises a more thematic approach to the exhibits, including a Northern Voices section that has been curated by First Nations residents. Plans also include a Geography section that will feature projections of the Aurora Borealis, and experiential installations describing the 6 seasons of the year in the Arctic (there are six seasons, not just four, based upon the environmental changes that occur).

Even though the Arctic Gallery was still under construction during our visit, there were plenty of other impressive exhibits to see throughout the Museum. One that always impresses kids and grownups alike is the Fossil Gallery, where there are hundreds of dinosaur skeletons on display, and where 15 life-sized fully-fleshed-out replicas confront each other in the Swamp Forest. (Where else can you walk between dinosaurs and live to tell about it.) Dinosaur Gallery at the Canadian Museum of Nature

TIP: These replica dinosaurs were created by internationally-renowned Research Casting International, a Canadian company out of Trenton, who specialize in casting and assembling dinosaur installations at the ROM in Toronto in Canada and around the world.)

Henk and I also toured a gallery filled with large, glassed-in dioramas from the 1950s that have been meticulously preserved and still look as good today as they did when they were first installed. These displays showcase Canadian wildlife, presented for the first time in natural scenarios to give visitors a real sense of the habitats in which they live. Even the grasses are specific to the actual regions represented. TIP: Don’t miss the Blue Whale skeleton on display, which may not be as large as Toronto’s newly installed specimen, but is impressive nonetheless.

The Blue Whale skeleton at the Museum of Nature

3. The Rideau Canal and the Locks Right downtown, flanked by the Parliament Buildings on the west side, and the castle-like Fairmont Château Laurier on the east, is the largest set of locks on the entire Rideau Canal system. Known as Locks 1 – 8, this series allows for a vertical life of almost 80 feet from the Ottawa River below to the Canal above, eventually linking to the Rideau River. Completed in 1831, the Locks were (and still are) an amazing engineering achievement and are well worth a visit. Take a walk down the stairs to get a closer look, and if you are interested in a little more history, adjacent to the locks is the Bytown Museum, Ottawa’s oldest stone building dating from 1827, which served as the Commissariat during and after the locks’ construction. If the engineering of the locks themselves doesn’t interest you, the 8km stretch of the Canal that runs right through downtown provides a peaceful place for a walk or bike ride, as its winds its way through the centre of Ottawa. While some may lament the Byward has ‘gone Hollywood’ and become more of a tourist venue than the local market it once was, the Byward is still the centre of a vibrant downtown neighbourhood that offers plenty to see and do for visitors and residents.

Yes, there are the ‘Obama cookies’, made famous when the U.S. President made an unscheduled visit to the Market, surprising both the locals AND his Secret Service. And no tour would be complete without a stop at Ottawa’s famous BeaverTails stand which has become a must-do on every tour itinerary. But the way I see it, cookies and deep fried dough covered with sugar are always a good idea, regardless of whether they are considered ‘touristy’ or not! 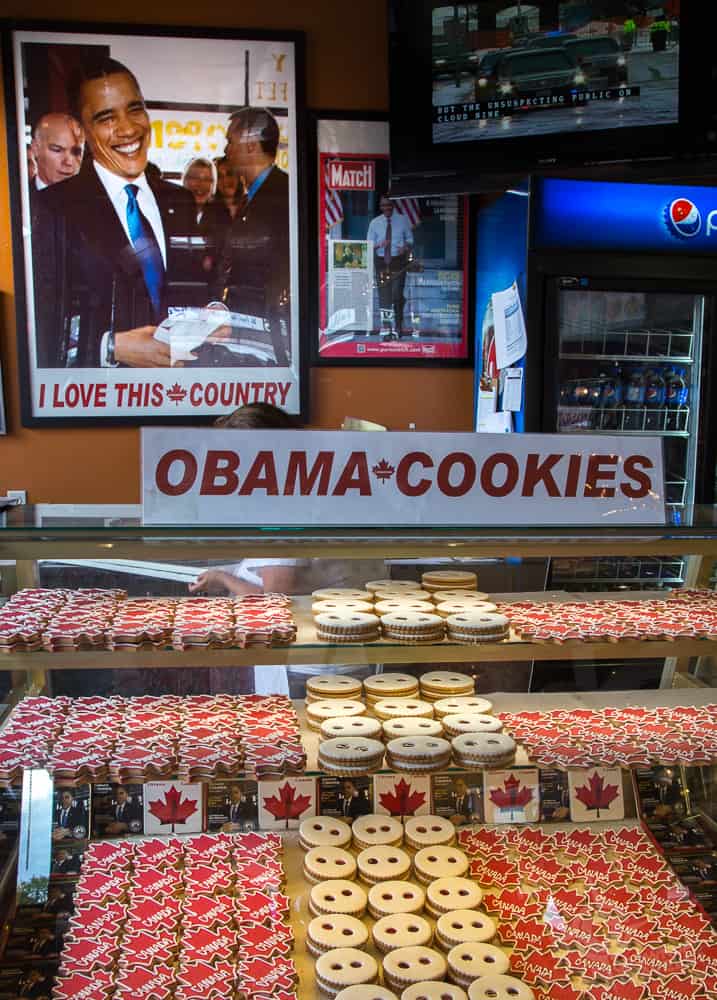 It’s not just the Market that draws people here, though: the entire area has seen a growth in bars and pubs, coffee shops, restaurants of every description and size, and boutiques and shops that cater to every budget. Much more than just a market, the Byward has been at the heart of Ottawa since 1826, and by the looks of recent developments, will continue to be so for a long time to come.

TIP: If you’re looking for a grownup place near the Byward to quench your thirst, head up to Copper Spirits and Sights, the rooftop bar at the new Andaz hotel where you can enjoy cocktails and small plates while taking in a stellar view of all of downtown Ottawa. Dramatic light on the National Gallery of Canada

One of the best things about Ottawa is the concentration of cultural attractions in a relatively small geographic area. Henk and I literally walked out the back of the Château Laurier where we were staying and found ourselves looking at the impressive glass exterior of the National Gallery of Canada.

Like other museums that are planning new galleries and exhibits as part of Canada’s 150th birthday celebration, the National Gallery will be opening the Canadian and Indigenous Galleries in a space that has been transformed to accommodate the 1,000 works of art. The exhibition, Our Masterpieces, Our Stories, is placing an emphasis on telling an integrated story of our culture, one that reflects both our First Nations AND European artistic contributions, and will run from June 15 to September 4, 2017.

Although Henk and I didn’t have time to visit the National Gallery, (we’ll have to use that as an excuse for another visit) we did manage to capture a few photos of the building’s beautiful exterior and the unique art installations on its grounds. “One Hundred Foot Line” by Roxy Paine outside the National Gallery

Not everything in Ottawa is so serious, and Henk and I had fun stumbling on some of the more unexpected surprises around the city. Like the bronze statue of Oscar Peterson and his piano just outside the National Arts Centre (which plays music when you walk by). There’s also the newly-installed Ottawa sign (which Henk and I jokingly nicknamed the Awatto sign) that was inspired by Toronto’s City Hall art installation and will no doubt be a popular selfie spot during the Canada 150 celebrations. Awatto or is it Ottawa?

But my favourite was this retailer who, in true Canadian fashion, apologized for any inconvenience all this celebrating might cause. So Sorry. So Canadian.

While all eyes may be focused on July 1st for the big Canada Day celebration here, I personally think that Ottawa has a lot to offer visitors before and after the ‘big day’ as well – not just this year but every year. I’m just glad that I didn’t wait another 30 years to figure it out!

Special thanks to Ottawa Tourism who hosted Henk and I as we toured some of the city’s highlights.