When I told people that I’d never been to Orillia, Ontario, in my life, they were surprised. I can see why, since I am from Ontario, grew up in Sudbury, and for more than 30 years I have lived in Toronto. Compared to my usual 4-5 hour road trip up north which I’ve done hundreds of times, Orillia is practically in my backyard.

But the explanation why I had never visited Orillia was simple: my route north has always taken me up the ‘other’ highway, Hwy 400/69, which forks away from Orillia and Lake Simcoe. But a couple of weekends ago, I had the chance to go to Orillia for a few days, and I jumped on it. Because as Yogi Berra once said, “When you come to a fork in the road, take it.” 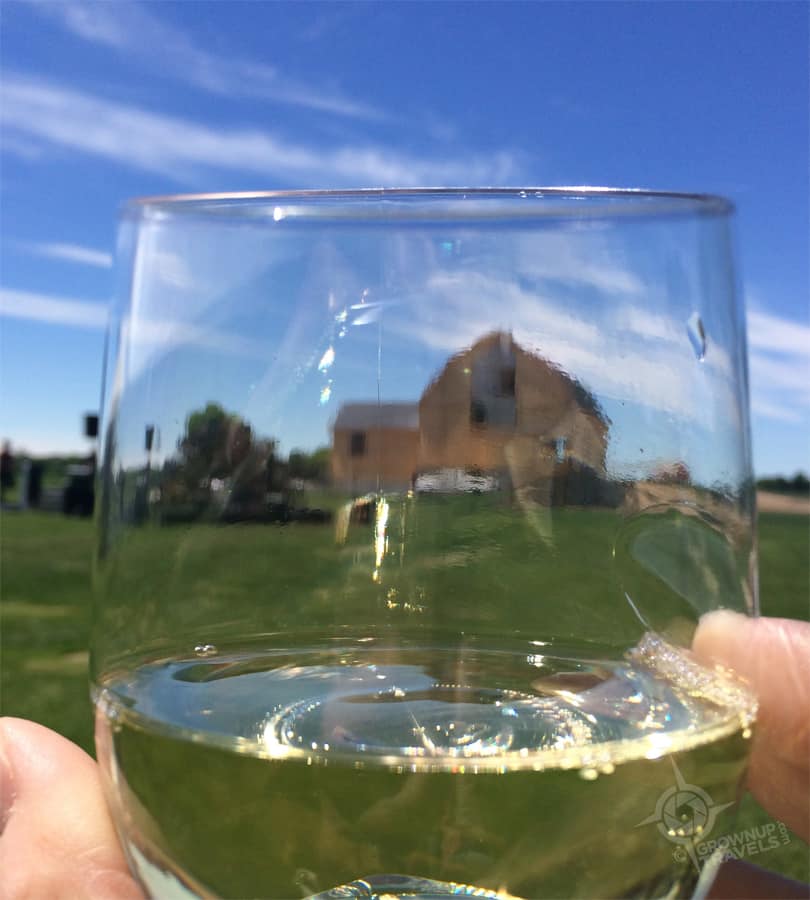 My weekend was off to a good start with a stop at the new event grounds at Burls Creek, seventeen kilometres shy of Orillia and the site of a weekly farmer’s market and craft fair called the OK Friday Barn Fair. Taking place every Friday, the market offers local in-season produce, crafts and licensed events with entertainment. There’s even ready-made foods waiting for you to take up to the cottage if you need something for Friday night dinner.

Near the market is one of the most impressive features at Burls Creek: the newly reconstructed barn that will be used to host everything from weddings to VIP events, and will be the centrepiece for two weekend-long festivals happening over the summer on this expansive 650 acre site. Rebuilt by Mennonites, this V.I.Barn will become the centre of Burls Creek events

If you are a fan of music+camping+art, you’ll want to check out July’s Wayhome arts and music festival, as well as August’s Boots & Hearts event, the second largest country music festival in the world. Between the beautiful grounds themselves, and the unbelievable lineups of acts and activities planned, these events promise to make Burls Creek a one-of-a-kind destination for festival-goers.

But on this particular Friday, the mood was more picnic than party, and it was a treat just to be outside the city, shopping the local stalls, enjoying fresh strawberries still warm from the field, and breathing in a little country air. (sounds like the makings of a country song right there!) Leaving the craft booths and market stalls behind, we continued on to Orillia, where I was delighted to discover the kind of place that could be a poster child for Small Town, Ontario. In a way, it has become that, in fact, thanks to Stephen Leacock’s Sunshine Sketches of a Little Town, his 1912 series of stories that were drawn from his experiences in the town. Set on the shores of Lake Simcoe and Lake Couchiching, with a pretty little port that looks out onto green islands and blue waters, Orillia certainly has the geographic position to make for an ideal community. It’s one of the reasons why Leacock, who grew up in the region, spent many summers here and eventually built his home only steps from the waters of the lake in Old Brewery Bay, a home that is now a Museum open to the public and worth a visit even if you aren’t familiar with Leacock’s work. Leacock’s house is located outside of Orillia’s centre, reflecting the writer’s desire to get away from it all to a peaceful setting where he could enjoy his library, host evenings with close family or friends, and write – which Leacock did prolifically, typically penning 1500 words each and every day in journals he filled while at the house.

Looking like an Arts & Crafts style beach house from the exterior, the first floor of the house has an inviting lake-facing verandah, rear sunporch and unpretentious common rooms, with most of the furnishings original to the house. Not surprisingly for the home of a writer, the library at one end holds hundreds of volumes in floor-to-ceiling glassed-in bookcases including first editions of many classics (I spotted Victor Hugo’s Les Miserables for one). Along with these literary works of art there’s also another work of art: a bust of Leacock himself. The second floor, where the bedrooms are located, is very different in style, with a distinctly ‘Muskoka cabin’ feel with wood panelling enveloping the space from floor to ceiling, literally. This probably reflects Leacock’s original 1908 cabin that was located even closer to the water, and whose materials were reused to build the current house after the cabin was flooded.

Talking a walk along the sunny path leading from the house to the boathouse which the author also used as a writing studio, it was easy to see why Leacock would have found inspiration and sanctuary in such an idyllic setting. But the charm of Orillia is not just in its geographic location, or its literary alumni. Unlike many small towns who fell victim to ‘urban renewal’ in the middle part of the 20th century, Orillia’s main street still retains much of its turn-of-the-century charm, thanks in part to some significant architectural landmarks. For starters, Orillia has an Opera house, originally built in 1874, and modified by 1895 to include turreted towers and a wraparound balcony modelled after formal Opera Houses in Europe. Unfortunately, after a 1915 fire, much of the building was destroyed, and the rebuilt design only included one turret. Nevertheless, it is a lovely example of early 20th century architecture, and continues to host music and theatre performances in its auditorium (named after the town’s most famous music legend, Gordon Lightfoot). I wouldn’t be a real Canadian if I didn’t know Lightfoot and at least half of the lyrics of the Edmund Fitzgerald, but I honestly didn’t know Lightfoot hailed from Orillia. (Clearly I have a lot to learn about my own backyard – and Gordon Lightfoot.)

Orillia Museum of Arts and History

Not far from the Opera House is the Museum of Arts and History which does double-duty like its name suggests. Built by architect Thomas Fuller, who worked on Ottawa’s Parliament Buildings, the building is known as the Sir Sam Steele Building, the most impressive feature of which is its 70-foot tall clock tower. The clock workings are over 100 years old, and are wound twice monthly so that they keep perfect time.

A source of pride for the town whose residents can set their own watches by the accuracy of its hourly chime, the landmark has even been used as part of a dress design by printmaker Xavier Fernandes, who heard about a ‘wearable art’ fundraising initiative for the Museum, and designed a ball gown for the show that features the clock tower. If historic buildings or local museums aren’t your thing, but shopping is, a visit to downtown’s Mariposa Market is a must. This main street market is actually a collection of 3 downtown storefronts that are connected to each other inside, but have kept their individual storefronts intact.

The street level cafe is filled with display cases of cupcakes, butter tarts, sweet and savoury spreads and chutneys, as well as lunch items you can enjoy in the cafe or take home for later. Flanking the main cafe are shops selling giftware and fashions, and downstairs you’ll find an eclectic shop that sells everything from teapots and Christmas decorations to all-day suckers and hand-made chocolates. If you don’t find something to tempt you here, you probably should have stayed home. 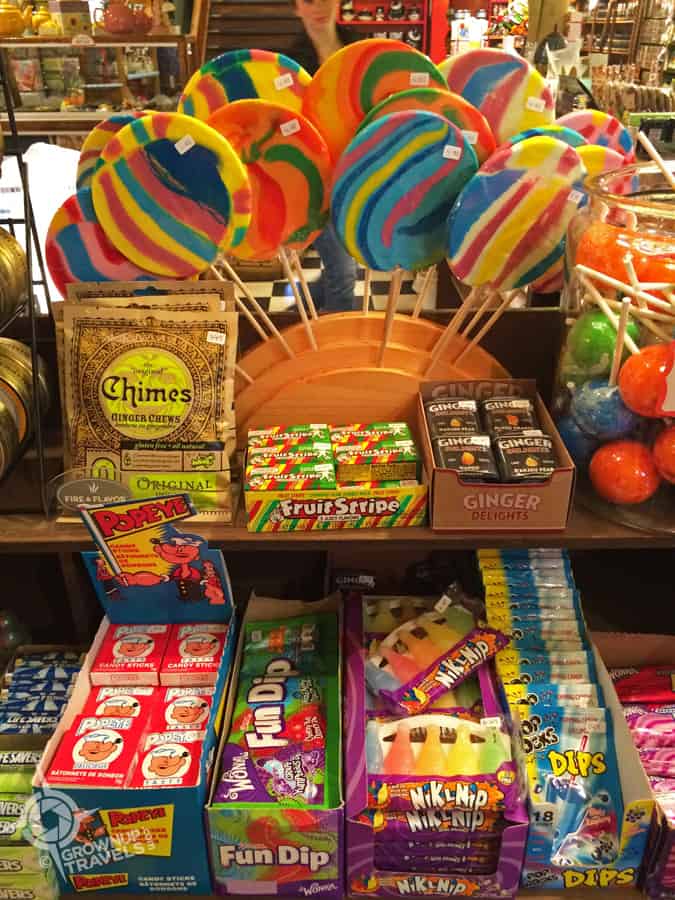 Mariposa Market’s basement is like being a grownup kid in a candy store. A Street of Shoppes

Mississaga Street is Orillia’s heart, and definitely one of the reasons why its downtown is so appealing. An easy stroll takes you past boutique home decor, fashion and specialty shops, cafes, and restaurants, and the old world streetlights with colourful banners and beautiful flowers that line the street add to the charm. It’s the kind of street you want to explore leisurely, but it’s small enough not to have to miss a thing – exactly the kind of small town downtown you hope to find on a day trip out of the city. And if you want to finish off your day with a stroll along the waterfront, Orillia gets that right, too, with a beautiful boardwalk, biking trail and gardens that look out over Lake Couchiching. (In fact, there’s a big city not far to the south that could learn a lot about waterfront development from its neighbour to the north!) Yogi Berra had it right about taking that fork in the road, because of course the point is that you’ll always find something worth exploring: I found a charming little town called Orillia.

TIP: If you are looking for a place to stay in Orillia, The Stonegate Inn (a member of Resorts of Ontario) is the place to be. It’s a very short drive from downtown, and there’s no problem finding parking when you do drive downtown – another thing to love about small towns! Or for other options, click here. Special thanks to the folks at the OK Friday Barn Fair and Ontario’s Lake Country Tourism who hosted our weekend festivities.