Falling for my own backyard No, this isn’t one of those “I’ve fallen and I can’t get up” kind of stories. This is about Henk’s new thing: waterfalling, as in going to see waterfalls. He got the idea after picking up a brochure entitled “Waterfall Tours of Ontario”, so I suppose I should have seen this coming…

For 50+ years I have lived in or visited Sudbury, but it wasn’t until last weekend that I saw this waterfall.  When Henk suggested we go check it out when we were up at the cottage, my first thought was “why?” and his response was “why not?” to which I had no good answer. Especially when I put on my ‘traveller filter’ and realized that if we were in any other place other than my own backyard, this would be exactly the kind of thing I would go out of my way to do. So off we went a-falling. Onaping Falls, seen from the pedestrian bridge on the crater rim

Onaping Falls turned out to be an impressive set of falls, and one of the highest in Northern Ontario, since the water actually spills over the rim of an ancient meteor crater, created when a giant 10-km wide meteorite struck here 1.85 billion years ago, forming what’s now known as the Sudbury Basin.

That rugged environment is reflected in the kind of falls these are, since this is no softly flowing stream, with gentle drops into placid pools. No, this is a Northern Ontario waterfall: raw, ragged and full of wild energy, water smashing over a jumbled pile of rocks as it makes its way to the lake below. This is the Canadian Shield at its most authentic, which probably makes it a Top 10 Geological Must-See Destination (hey, if you’re a geologist, this asteroid impact stuff is very cool – don’t judge.) AY Jackson’s Spring on the Onaping River – I THINK (I haven’t found a definitive image of the painting, other than this one)

If you’re more into art than rocks, Onaping Falls has history there as well. In 1953 it became the subject of one of the Group of Seven’s paintings, A.Y. Jackson’s Spring on the Onaping River, which was purchased in 1955 by a group of students and placed in Sudbury Secondary School high school. Shortly after Jackson’s death in 1974 the painting was stolen and has never been recovered. Geology + art + grand theft…not bad for one little hometown waterfall. Who knew? Certainly not me.

Hooked on the waterfall theme, our next visit up north had us hitting another landmark I’ve crossed over hundreds of times but never explored much: the French River, and one of many sets of falls along this historic Canoe Route to the West, Recollet Falls. 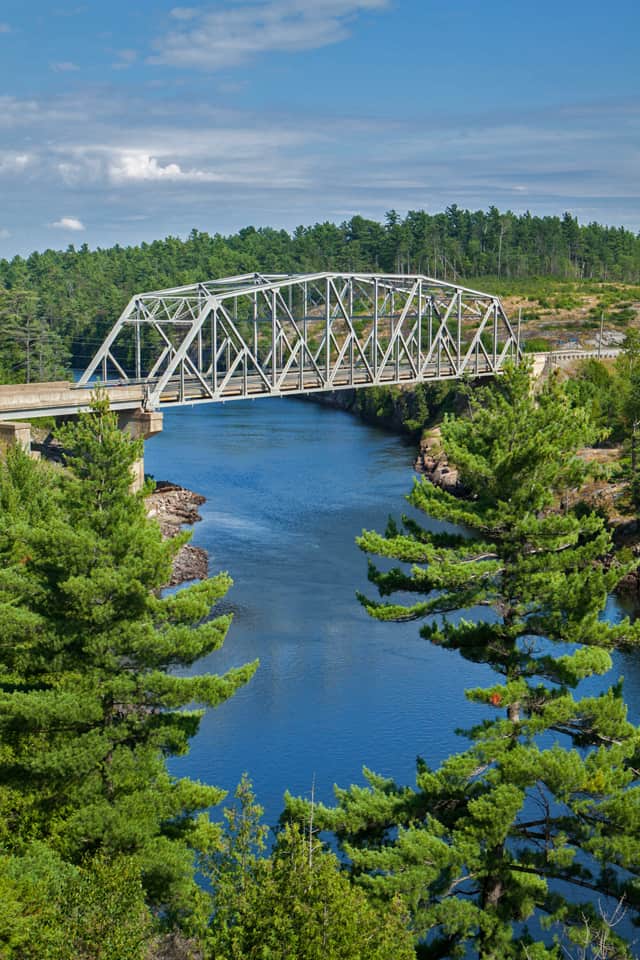 Iron bridge over the French River, seen from the snowmobile bridge opposite

Crossing the French River on one of the only surviving iron bridges left on Hwy 69, we pulled in to visit a modern museum documenting the role the French River played in the Fur Trade that opened up the west of Canada. And only a short walk away was one of the best vantage points to see the river, atop one of the largest snowmobile bridges of its kind, spanning the river’s steep cliff sides and suspending you 90 feet above the water.

Better still was the 1.5 km hike downriver through shaded trails over glacier-carved rocks, at the end of which you can stand on the very edge of the clear-running Recollet Falls. But don’t be fooled by the shallow drop of the falls. Although they may not look like Niagara, they have spilled many unprepared canoeists, including a group we encountered that afternoon who were following a small piece of this Voyageur trail. Recollet Falls on the French River

After an hour spent enjoying the sound and sight of the ever-changing cascade, we headed back to the trailhead. Along the way, we passed a group of Mennonite women hiking the trail to the falls and negotiating the rocky path, long skirts and all.  It struck me then that what I had taken for granted for so many years, was in fact a destination many visitors went out of their way to visit. And seeing my own Northern Ontario backyard through their eyes made me fall for it all over again. The cliff walls of the French River

TIP: I thought I had made up the verb ‘waterfalling’, until I googled it, and up came an actual website, www.gowaterfalling.com, where someone has catalogued a whole whackload of waterfalls they’ve visited! So if you think you’re falling for waterfalling, check it out.