Enjoy A Taste of Sarnia, Ontario Historically, Sarnia and the surrounding area has suffered from a few prejudices over the years. As the first place in North America where oil was commercially drilled, its skyline is known more for refinery stacks than architectural showpieces. And with names like “Chemical Valley”, “Petrolia” and “Oil Springs”, the images that come to mind are less than flattering. But this would be unfair.

Things to See and Do in Sarnia: Blue Water Bridge

First of all, there IS an architectural showpiece here in Point Edward’s Blue Water Bridge, something the residents like to refer to as their ‘Eiffel Tower’. Spanning the river that separates Canada from the U.S., the bridge is a soaring steel construction whose graceful arches dominate a people-friendly waterfront where on any given day of the week, you’re likely to find kids jumping into the river, or fishermen casting lines into the blue-green water that inspired the bridge’s name. Point Edward’s Native Souls sculpture near the Blue Water Bridge where a Chippewa village once stood.

There’s a reason why the swimmers and fishermen are in Sarnia: the region has made huge strides in cleaning up those Lake Huron waters. In fact, Canatara Beach, part of a beautiful 200-acre city park just north of downtown Sarnia, has earned the coveted Blue Flag status – an international designation that ensures the water meets the highest standards of cleanliness and environmental quality (and aptly complementing the name “Canatara”, which means “blue water” in Ojibwa). But don’t let all this talk of green parks and blue water fool you into thinking Sarnia is only for the outdoors-inclined. If urban indulgences are more to your taste, Sarnia’s got those too, some of which might surprise you.

The Judith & Norman Alix Art Gallery in downtown Sarnia is a rarity when it comes to galleries, because admission here is always free, and visitors are encouraged to stop by as often as they like. While their permanent collection is well worth a visit, now is a particularly good time to go, because the gallery is hosting Masterworks from the Beaverbrook Art Gallery, the private art collection of Lord Beaverbrook (William Maxwell Aitken). 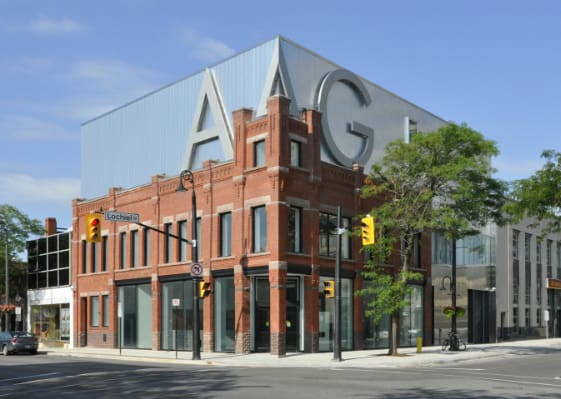 Lord Beaverbrook set out to impress when he began acquiring works of art, purchasing pieces by famous Canadian and International artists such as Emily Carr, Gainsborough and Matisse, any one of whose works are worth seeing. Their Canadian and European landscapes, evocative portraits of figures such as Winston Churchill and Prince Edward, are all on display here, along with an unusual portrait of Lord Beaverbrook’s wife, Lady Dunn, painted by famous surrealist Salvador Dali. But the indisputable showstopper in this collection is the 14-foot-tall canvas by Salvador Dali titled Santiago El Grande that lives up to its ‘grand’ title in every way, and whose perspective and foreshortening is overpowering at this scale (apparently even more so when you lie on your back on the floor to view it – which we were encouraged to do!) There aren’t many galleries where you can see European and Canadian Masters for free, let alone a standout piece like this Dali – but if you really want to get the most out of your experience, consider paying the fee to have a docent accompany you. These well-informed guides bring much to the table with their knowledge about the paintings, the history behind each work, or the artists themselves (like one of the British artists in the collection who was rumoured to be Jack the Ripper!) These kind of interesting tidbits provided on a guided tour will ensure you enjoy your own visit that much more. You may be surprised to learn that Sarnia has a long history in theatre, and that it rivals some of Ontario’s more well-known stage towns, like Stratford and Niagara-on-the-Lake. Amateur theatre began here in 1927, making Sarnia one of the oldest operating theatre groups in Canada. And over the years it has won numerous acting, directing, and design awards for its productions.

After decades performing in various historic venues around the city, Theatre Sarnia now calls the Imperial Theatre its permanent home. Built as a movie theatre in 1936, this art deco cinema closed in the 1980s, and was left abandoned and derelict, and was slated for demolition until a group of local enthusiasts decided to restore the building to its former glory. Original Art Decor Lights in the Imperial Theatre in Sarnia

Today the theatre group mounts several stage productions each year, and also hosts big-name performers and entertainers such as Howie Mandell and Andre Phillipe Gagnon in special events that happen at the Imperial throughout the year.

Food for Thought: Where to Eat in and Around Sarnia

Whatever your food preference, there are plenty of palate-pleasing restaurant options in Sarnia, many of which are family-owned and operated and have become not just food destinations but local landmarks.

Eat Where the Fish Are at Purdy’s

The Purdy family has been fishing the waters of Lake Huron for generations, hauling in catches of freshwater pickerel, perch, whitefish, trout and more for over 100 years, and selling them at Purdy’s Fish Market, a local institution located right on the waterfront where the fishing boats dock.There’s no better place to buy fresh fish or all the fixin’s, from gourmet sauces and rubs to daily soups made fresh daily and available for takeout. Purdy’s reputation for quality is well known, not just locally but much farther afield, and their fish are just as likely to turn up on the menu of high-end restaurants in Chicago and Manhattan, as they are at the local area restaurants. 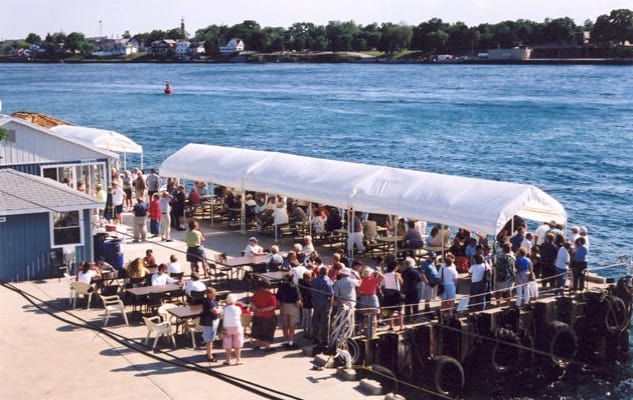 But for a true Point Edward experience, visit Purdy’s in the summer, when they set up an outdoor tented patio where you can get a taste of their famously fresh – and delicious – fish and chips in a casual setting that is as close to the water as you can get. (And speaking of chips – one of Sarnia’s food legends, Albert’s Rolling Lunch, has been credited for serving the Best French Fries in Canada, and has been a waterfront fixture every summer for the past 50 years.) If peameal bacon is your favourite breakfast staple, then John’s Restaurant is a must-do. Family-owned and operated in the same location for over 51 years, what started as a truck stop diner for people passing through Sarnia has become a destination for visitors and regulars (some of whom are likely to be found chatting up the staff in the booth next to you). But whether you are a neighbour or a newbie, John’s staff offers you the same down-to-earth welcome you would expect from a restaurant that has served plenty of travellers looking for a hearty home-style meal or a breakfast that features that slice of heaven known by some of their American visitors as ‘Canadian bacon’. For a light casual lunch in an historic and charming house where the smell of fresh baking greets you the moment you open the screen door, try the Olde Haus Cafe just outside Sarnia in the small town of Forest, where I had a delicious salad and what might be the best brownie I’ve ever eaten in a restaurant. (I still can’t believe I almost turned it down!)

Some of Olde Haus Cafe’s goodies

Family Platters Served Up at Salvatore’s

If family-style Italian dining is more your speed, a Point Edward favourite is Salvatore’s Trattoria, where menus are optional and instead, the kitchen sends out platters of pasta and Italian favourites for the whole table to enjoy. Salvatore’s is sure to satisfy

Olive’s Casual Cuisine is another favourite, but don’t let the name fool you. There’s nothing casual about the calibre of the food here, whether it’s their fresh lunch items that are a notch above, or their creative dinner selections that include venison, shrimp and duck. Plan on indulging in a little dessert, too, as Olive’s is known for its delicious and decadent pastry selection. Thirsty for Something Different?

How about cider (or ‘hard cider’ as we know it in Canada)? Several of the best ciders in North America – and the world – are made right outside of Sarnia at Twin Pines Winery. Here, on a family-owned orchard, the Vansteenkiste brothers, Mark and Mike, transform apples and pears into the slightly effervescent, award-winning vintages that have won Bronze, Silver and Gold in multiple competitions. Considered a “winery” because they press what they grow, Twin Pines recently received the highest award when their “Hammerbent Red” cider took home Best in Show at the 2014 Great Lakes International Cider and Perry Competition.

A visit to the cidery offers a little something for everyone, whether you choose to sample some of these delicious ciders in the newly-built tasting room, shop for in-season produce, or browse unique gifts in their barn-sized retail store. A couple of days is only enough time to enjoy a small taste of any place, even a small city such as Sarnia. But if the two days I spent there are any indication, it was enough to show me that Sarnia has evolved far beyond its petroleum past, and today offers art, culture, and culinary discoveries well worth the drive to this corner of Ontario. (Read more about exploring Sarnia here.)

TIP: The Masterworks Exhibit, it is on until February 7, 2016 at the Judith & Norman Alix Art Gallery. So don’t wait too long if you want to see its spectacular Dali.

Special thanks to Tourism Sarnia Lambton and Ontario’s Southwest who hosted my overnight stay in Sarnia and introduced me to these places – and the people behind them.