Urban street art is everywhere these days, and the subject of plenty of articles and Instagram feeds from around the world. But nowhere has this art form done more to transform a neighbourhood than in the streets of Comuna 13, in Medellin Colombia, an area once so notorious for its violence that visitors wouldn’t be caught dead there – unless it was literally. Much of that has changed now, though, and Henk and I both were keen to take the Comuna 13 Graffiti tour to learn more about how and why street art has changed this barrio for the better. 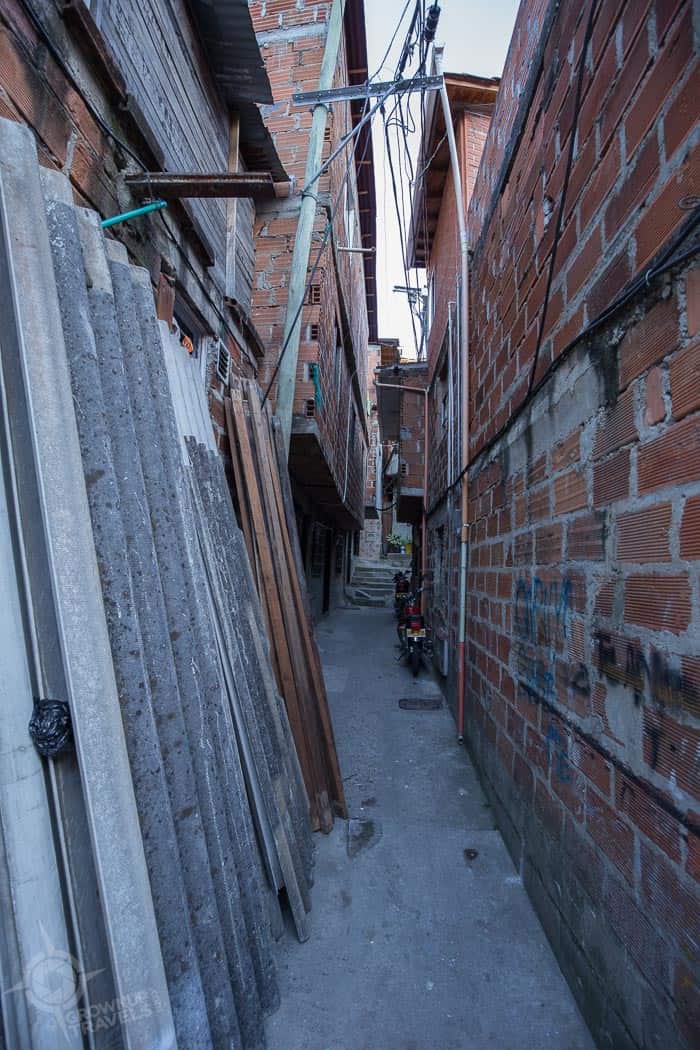 Comuna 13 is a rabbit-warren of alleys and narrow streets

Colombia has long been known for its violence, and Comuna 13 in the San Javier neighbourhood had the notorious distinction of being the most dangerous ‘hood, even within Medellin, the city that was once labelled as the most dangerous in the world. Comuna 13’s geography made it an ideal location for street gangs, leftist rebels and drug traffickers to call home, as the barrio’s steep hillside location served as a natural fortress, and its narrow alleys and rabbit warren of streets made it a difficult place to navigate if you didn’t know it well.

With 3 factions looking to control it (FARC, the guerillas and the state military), the community was literally caught in the crossfire of these fighters.

Everything has its tipping point, even violence, and that moment came to Commune 13 in 2002, when 21 military actions were carried out in a 12-hour period, and amidst a rain of gunfire between government militia and left-wing rebels, 7 children were killed in the streets. This prompted one distraught woman to run into the street waving a white towel and crying “No mas guerra!” (No more war!). More residents took up the cry, displaying white sheets and flags everywhere in protest and eventually galvanizing the community to take back their own streets. The graffiti began as a way to protest the violence in Comuna 13 and strengthen the community’s resolve to change from within – using (ironically, and perhaps purposefully) the spray paint that gangs use to mark their turf. Here, though, the paint is used not just to bring colour to the grey concrete spaces in the barrio, but more importantly to make a statement that the barrio is leaving its darkest days behind. This graffiti initiative didn’t just happen randomly, however; it was thanks to the leadership of courageous local artists like Hector Pacheco that this form of self-expression became a project with an even higher purpose.

If there’s such a thing as a Comuna 13 martyr, then 20-year old Hector Pacheco (known as “Kolacho”) is as close as it gets. This local resident of Comuna 13 had a vision for how he could change the path for young people in his neighbourhood, by diverting their energy and frustration into music and the arts rather than violence. A hip-hop musician himself, he began working with kids and channelling their passion into these forms of self-expression, hoping to help change their futures for the better. Young men in the barrio

Unfortunately, like so many agents of change, Kolacho was perceived as a threat to the gangs who recruited their members from these barrios, and Kolacho fell victim to the violence he was trying to eradicate, gunned down in the very streets he was trying to improve. But Kolacho’s popularity, and the desire to continue his work lives on in Casa Kolacho, the youth centre in the heart of Comuna 12 that was founded by 16 young men after Kolacho’s murder. It has become a symbol for positive change in the neighbourhood by providing resources to young musicians and artists, and is responsible for 90% of the graffiti in the barrio. There’s much more to the imagery on these streets than just colourful paint, which becomes apparent when we listened to our guide, Kabala, speak about the history of the barrio and its art. Even without an English translator helping us overcome the language barrier, it was easy to see that Kabala is emotionally invested in the work that he does. Our guide, Kabala, on the Comuna 13 Graffiti Tour

Kabala explained the significance of some of the images, elephants being a favourite subject as they are a symbol of strength and memory reminding people to never forget the violence that is always a threat to the young people in the Comuna. And when Kabala speaks about the death of the children in 2002, it’s impossible not to see how this has affected him.

Children followed us around on our tour There’s no doubt that these graffiti tours, along with the installation of escalators to help move the residents more comfortably up the steep hillsides, and the influx of pride that has inspired residents to improve their own homes, has helped to open up the barrio to the outside world. Typical set of stairs in Comuna 13

This in turn has inspired local entrepreneurs to open up shops that cater to the tours, whether it is selling locally-designed graffiti-inspired T-shirts or local street food – all of which are positive signs that the changes in Comuna 13 are gaining ground. The violence is not all gone, however, and there is still much work to be done before this barrio becomes a place where I would choose to go for an unaccompanied stroll. But that being said, there has been remarkable change here over the past few years that justifies Medellin’s favourite buzzword: transformational. And the symbol of that change is plastered all over Comuna 13.

TIP: There are several tours to Comuna 13, but the original one is the Medellin Graffiti Tour which can be booked online through the Toucan Cafe, and uses local guides like our hip-hop artist, Kabala, to lead the tours. (They also provide an English guide to help with translation.) Tours cost 60,000 Colombian Pesos, about $20 USD with proceeds helping to fund Casa Kolacho.