Northern Lights Sound and Light Show at the Parliament Buildings

It’s been a banner year for Canada’s Capital Region. With the entire country celebrating Canada’s 150th birthday, Ottawa has pulled out all the stops when it comes to the attractions and events happening in the city. But if you think that this city is all about sedate tulip gardens and long-winded rhetoric in the House of Commons, think again, because this summer, huge dragons and giant spiders delighted both residents and visitors alike. Are you lookin’ at me? Long Ma seems to be asking

If you’ve never heard of La Machine until now, you’re not alone. That’s because this creative street theatre company based in Nantes, France, had never brought its magical creatures to North America before. So it’s no wonder the residents of Ottawa turned out by the hundreds of thousands to fill the streets, hoping to catch a glimpse of Long Ma the dragon and Kumo the spider, two of La Machine’s larger-than-life mechanical creatures that made their North American debut here at the end of July. Kumo in the Byward Market

A Classic Tale of Good vs Evil

La Machine’s creatures don’t just hang around the city like some Macy’s Thanksgiving Day parade balloon; these two characters are part of a very active – and interactive – street theatre production, so there’s a story here, and one that is adapted for every destination they visit. In Ottawa’s case, La Machine’s dragon and spider face off in a classic story of good vs evil: Long Ma the good dragon suffers the loss of her wings at the hands (or legs) of evil Kumo, the giant spider. Kumo hides underground but recent construction on Ottawa’s underground rail system disturbs her and she is forced above ground where Long Ma chases her around the city.

There are a few confrontations, Long Ma recovers her wings, and the balance of good and evil is restored in the world.
Oh yeah, and did I mention that it snows a couple of times, too. Because, why not? This is theatre, after all! The story itself is really just the framework for an amazing spectacle, and spectacle it was. Whether it was the weekend weather (equally spectacular) or the novelty of these creatures, 750,000 people packed the streets of Ottawa to catch a glimpse of Kumo or Long Ma as they roamed the streets of the Byward Market, or walked past the Parliament Buildings before battling each other at the Supreme Court of Canada (poetic justice, perhaps?)

By day 3, people were camping out for hours along the route the creatures would take, keen to get a place to watch them as they went by. And many more visited Long Ma and Kumo while they slept at locations around the city. Long Ma recovered her wings after battling Kumo at the Supreme Court, but needed a rest after all that effort. It’s not just their size that makes Long Ma and Kumo so mesmerizing – they are as expressive as they are enormous, with credit going to their ‘operators’ who became mini-celebrities in their own right, generating applause and cries of ‘Bravo’ as they were shuttled towards the creatures pre and post-show. These ‘puppeteers’ had the ability to make these creatures both endearing and terrifying.

Equally important to the whole experience were the 12 musicians who made up the orchestra that accompanied the creatures. Supported on elevated platforms that followed the stars of the show, their haunting score helped create a surreal ambience that complemented the fantasy of the creatures themselves. 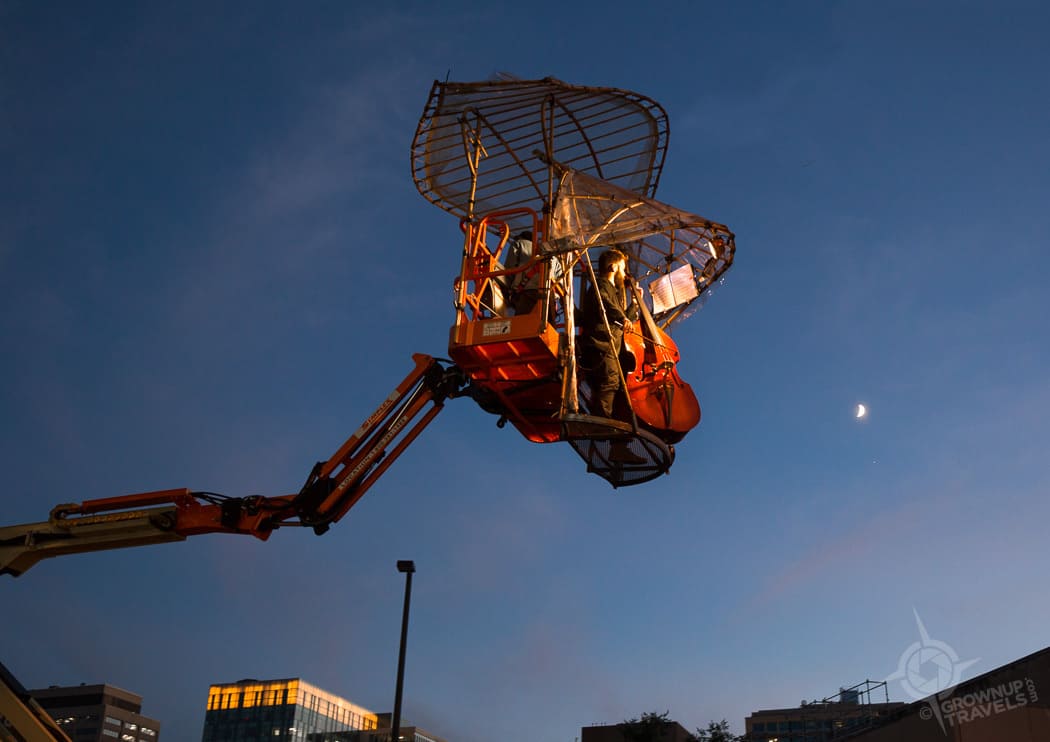 Meet Fabrice, the charming cellist who accompanies La Machine’s creatures (and hails from Nantes himself)

If you missed Kumo and Long Ma on their short visit to Ottawa, you can still get a photo of another impressive spider by visiting ‘Maman’, the bronze sculpture by Louise Bourgeois installed outside of the National Gallery of Canada. “Maman” has been here for a while, and has no plans to leave (or roam the streets) anytime soon, and you can get even closer to her than you could to Kumo.

If dragons are your favourite magical creature (as they are mine), you can find more of them just across the river in Outaouais at another larger-than-life celebration which is here until October, 2017: the MosaïCanada150 garden installation at Parc Jacques Cartier. Although made of plants not metal, these dragons are as magnificent as Long Ma, if not as mobile. Ottawa is full of surprises this year, and I’ve found myself more and more impressed with every visit. But even I wouldn’t have imagined giant spiders and fire-breathing dragons – kudos to the creativity of the organizers and artists whose vision brought both to life and made for an incredible experience for visitors and residents alike. Special thanks to Ottawa Tourism who hosted Henk and I for a ‘magical’ weekend with Kumo and Long Ma.